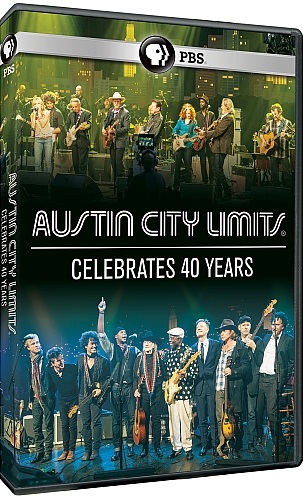 PBS will release Austin City Limits Celebrates 40 Years on Tuesday, December 2nd.  Austin City Limits’ four-decade long run on PBS is especially important to both the network and to music lovers alike.  In the four decades that Austin City Limits has been on PBS, it remains the only TV series to be awarded the Medal of Arts.  Also in that time, MTV’s Unplugged and VH1’s Storytellers have gone by the wayside.  And even CMT’s on Crossroads series has failed to maintain the stability and reputation of ACL.  Throughout its now forty-years on television, ACL has seen and continues to see some of the industry’s biggest names take to the stage.  Those names include the likes of Elvis Costello, Foo Fighters, Nine Inch Nails, and so many others.  Many more names are sure to be added to that list as there appears to be no end to this landmark series.

In honor of the series’ fortieth anniversary, many of those same big names have come on board for this celebratory concert.  Bonnie Raitt joins Jimmie Vaughan, Gary Clark, Jr and Brittany Howard from Alabama Shakes for a performance of the Sam & Dave classic ‘Wrap It Up’ to open the concert.  Howard returns later in the show alongside Gary Clark, Jr. for a special performance.  Willie Nelson, the red-headed stranger himself, joins Emmylou Harris for a performance of Nelson’s ‘Crazy.’  Singer/actor Kris Kristofferson and Sheryl Crow team up for a performance of Kristofferson’s ‘Me and Bobby McGee.  Foo Fighters even make an appearance to perform Roky Erickson’s ‘Two-Headed Dog.’  That performance was recorded at the original ACL television studio especially for the concert.  Actor Jeff Bridges hosts the night’s festivities.  He also performs a special rendition of ‘What A Little Bit Of Love Can Do’ from the late singer-songwriter Stephen Bruton.  Bruton was a big influence on Bridges’ Oscar-winning role in the movie ‘Crazy Heart.’  As if all of this isn’t enough, Joe Ely and fellow local legend Robert Earl Keen make an appearance.  Blues legend Buddy Guy rounds out the show with a performance of ‘Mary Had a Little Lamb.’  And finishing off the whole thing is a star-studded tribute to Buddy Holly and the one and only Stevie Ray Vaughan.  A who’s who of guitarists performs Holly’s ‘Not Fade Away’ and SRV’s ‘Texas Flood’ for the night’s biggest finish.

Austin City Limits Celebrates 40 Years will be available Tuesday, December 2nd.  It will retail for MSRP of $24.99.  It can be ordered online direct from PBS’ online store at http://www.shoppbs.org/product/index.jsp?productId=50214636&cp=&sr=1&kw=austin+city+limits&origkw=Austin+City+Limits&parentPage=search.  More information on Austin City Limits is available online at