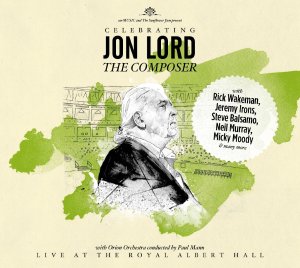 The music world lost one of its greatest figures two years ago when Deep Purple keyboardist and founding member Jon Lord passed away.  Lord may be gone but his legacy as a member of one of rock’s greatest bands lives on today thanks to songs such ‘Smoke on the Water,’ ‘Soldier of Fortune,’ ‘Burn’ and so many others.  His legacy as a composer lives on to as he crafted his own modern classical works including the now famous ‘Concerto for Group and Orchestra’ among others.  Earlier this year, Lord’s former Deep Purple band mates and his fellow musicians came together to celebrate his rich legacy at London’s famed Royal Albert Hall at the annual Sunflower Jam.  And now fans of Deep Purple and of Jon Lord alike get to experience that celebration for themselves thanks to Eagle Rock Entertainment and Universal Music Group in the form of the triple-disc CD set Celebrating Jon Lord.  Celebrating Jon Lord is a wonderful tribute to one of the great musical minds of the modern era.  The primary reason that it is such a wonderful tribute in its CD form is that the celebrations of Lord’s contributions to the rock world and the classical world are separated into two stand-alone collections.  Another reason that audiences will enjoy this collection is its collective set list.  And last worth noting is the audio mix on this recording in whole.  All three factors together make Celebrating Jon Lord a wonderful celebration of a great man and a great musical mind and one more welcome addition to the library of any Deep Purple fan or classic rock fan in general. 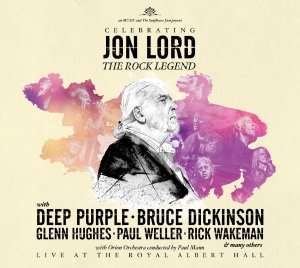 The separation of the Sunflower Jam concert celebrating the legacy of Jon Lord is among the most important factors in the success of this triple-disc live recording.  Just as important of note is the recording’s overall set list.  On the rock side, audiences are treated to a number of classic Deep Purple tunes which Lord helped bring to life.   Some of the best of those classics include the bluesy ‘I’m Gonna Stop Drinking,’ the full-on rocker that is ‘Burn’ and the much easier-going almost funk-style ‘Things Get Better.’  On the classical side, anyone that has any familiarity with the world of classical music will most certainly appreciate that collection’s first two songs.  ‘Fantasia,’ which opens the classical portion of the concert, bears very clear influence from Aaron Copland and to a lesser extent, Eric Osterling.  And its Indian-influenced opening measures aside, ‘Durham Awakes’ feels like something that came right out of the Broadway rendition of author Arthur Laurents’ book West Side Story with its complex, multi-part arrangement.  It’s the type of thing that would make Leonard Bernstein proud if he were alive today to hear it.  It’s one more example of what makes the collective set list of these two collections such a joy.  There are plenty of other songs from which listeners will find their favorite(s).  Simply put, there is not one back performance throughout the concert regardless of which side of the show one prefers.  Altogether, it’s one more reason that fans of Deep Purple and of classical music and classic rock alike will enjoy this recording in whole.

The separation of Celebrating Jon Lord into two separate halves and the set list of each half of the concert together make this recording a true joy for any Deep Purple fan and any fan of classical music and classic rock.  Neither of these factors would mean anything on the recording’s CD packaging however without one all-important aspect.  That aspect is the recording’s audio mix.  It is noted in the booklet included with Celebrating Jon Lord: The Rock Legend that Iron Maiden front man Bruce Dickinson and Lord’s former Deep Purple band mate Glenn Hughes actually “endangered the Albert Hall Architecture with ultra-passionate and furiously energetic versions of two Mark 3 Deep Purple classics, ‘You Keep On Moving’ and ‘Burn.’  That’s saying something, especially considering Albert Hall’s massive size from ceiling to floor and stage to doors.  Luckily, as powerful as Dickinson and Hughes were on these pieces, those charged with balancing the levels handled their duties expertly.  Though, that power does still show through at least to a certain extent whether in a car or on a radio.  That in itself is a tribute to the work of said individuals.  Much the same can be said of their work balancing the levels when powerhouse singer Steve Balsamo took the stage to perform on Lord’s composition ‘All Those Years Ago.’  Balsamo exhibits such control over his instrument.  He soars when it’s time to really hit those key moments.  He holds back just enough in the more reserved moments, too.  The audio engineers make those moments come out even more with their work here.  They exhibit just as much talent and expertise throughout the remainder of the concert.  Audiences will hear that expertise for themselves when they pick up either or both of these recordings for themselves.  The concert’s high quality audio mix, coupled with the show’s set list and its separation into two halves, leads to one more live recording that adds to Eagle Rock’s reputation as the leader in live recordings. It also adds even more to the reputation of Deep Purple and Jon Lord as one of the music world’s best bands and best musical minds.  Altogether, it proves Celebrating Jon Lord to be a wonderful celebration that any true music lover will appreciate.

Celebrating Jon Lord is a wonderful musical celebration of a wonderful musical mind.  The separation of the concert’s audio side into two halves lets audiences choose which half they prefer more should they prefer one half of the show to another.  The set list itself proves that both sides of the concert are well worth the purchase in its audio side.  The work of the concert’s audio engineers balancing the concert’s audio levels is nothing short of expert.  All three factors together make the audio portion of Celebrating Jon Lord a welcome addition to the library of any Deep Purple fan and lover of music in whole.  That is not to discount the booklets that come with each half of the concert.  The booklets that come with the CDs offer their own additional insight and enjoyment to the experience, making it even more worth hearing.  Those wanting to hear the concert’s audio side can pick up either collection now or both as they are available in stores and online.  The CDs’ companion Blu-ray presentation is also available now.  More information on these releases and others from Eagle Rock Entertainment is available online at: 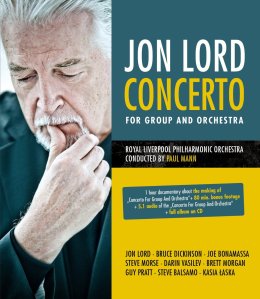 When Metallica recorded its now fan favorite live album S&M with the San Francisco Symphony, that recording was lauded by fans and critics alike. The praise showered on the band was fully justified. It was considered by some to be a groundbreaking performance because it was the coming together of two entirely separate musical worlds. What many people might not know is that S&M was not in fact the first time that the two worlds have come together. Former Deep Purple member Jon Lord crafted and performed his now famous Concerto for Group and Orchestra almost forty-five years ago in 1969. That performance was truly groundbreaking. Sadly, cancer claimed Lord in July of 2012. Thanks to Eagle Rock Entertainment though, Lord’s opus finally saw the light of day that same year. And now again thanks to Eagle Rock, audiences are taken even deeper into Lord’s majestic and magical composition thanks to a new documentary on that record. There is a lot to like about this recently released documentary. The documentary’s behind-the-scenes main feature is the main portion of what audiences will appreciate in this release.  Audiences are provided a history of Lord’s original performance of his opus in order to set up the more recent recording session.  As part of the recording process, viewers will also get to hear from some big names that helped bring the recording to life. Audiences will also appreciate that not only are they taken behind the scenes of the recording’s birth, but they are also provided with two opportunities to hear the recording in the new Blu-ray presentation.  It is included both as a bonus feature on the Blu-ray itself, and as its own separate CD as even more of a bonus.  All of this taken into consideration makes the documentary on Jon Lord’s Concert for Group & Orchestra quite the interesting work.

Far too many record labels in today’s music industry add “making of documentaries” to their new albums and try to pawn them off on fans as something special.  The problem is that so few of those “documentaries” in question are really worth the extra money shelled out by hard working audiences.  Jon Lord: Concerto for Group& is not one of those releases.  This documentary gives audiences a full history of the former Deep Purple member’s iconic song, from its very first ever performance in 1969 at the famed Royal Albert Hall to its first non-live recording in 2012.  Audiences see just how much work went into putting his composition to record.  It’s a fitting tribute to the musician, who sadly lost his battle with cancer just last year.  From the initial setup to the recording of each part and everything in-between, viewers will see that this isn’t just another one of those albums where each part was recorded separately in different studios.  This understanding will generate a whole new appreciation for the song and everything that went into actually doing a “studio” recording of it.  This applies to listeners that are both more familiar with Lord’s work and those that might be less so.

Along the course of the documentary, viewers get to hear from some of the biggest names in the rock world that took part in the recording process.  Those names include greats such as Bruce Dickinson of Iron Maiden and blues/rock guitar great Joe Bonamassa among so many others.  The respect shared between them and Lord is obvious through their shared commentary and by the seriousness with which they approached their respective roles in the overall composition.

The overall presentation of the documentary here is exceptional to say the least.  From the composition’s history to its first official studio recording, so much information is shared on its importance.  As impressive as the main feature is, Eagle Rock didn’t stop there.  Eagle Rock has included as a bonus for fans, the complete Concerto for Group & Orchestra both on its own CD and as a bonus feature on the primary Blu-ray disc.  And it’s not all that is included as a bonus, either.  Eagle Rock has exceeded expectations once again with this documentary’s bonus material.  Also included as bonus material is are interviews with Paul Mann and Marco de Groeji.  Mann conducted the orchestra assembled for the new recording of Concerto for Group & Orchestra.  The insight that he shares is something special.  That’s because of his understanding of and appreciation for the worlds of both rock and classical, as well as for Lord himself.  His interview and that with others involved with the record’s production more than live up to the title of bonus features. Together with the documentary’s main feature, they collectively make this release one that transcends genres.  It’s one that fans of both classical and rock will enjoy. It is available now in stores and online.   More information on this and other releases from Eagle Rock Entertainment is available online at http://www.eaglerockent.com and http://www.facebook.com/EagleRockEnt.  To keep up with the latest sports and entertainment reviews and news, go online to http://www.facebook.com/philspicks and “Like” it. Fans can always keep up with the latest sports and entertainment reviews and news in the Phil’s Picks blog at https://philspicks.wordpress.com.