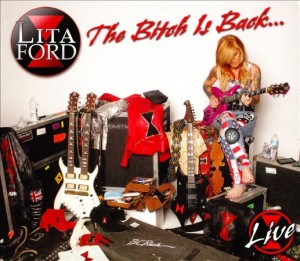 Lita Ford’s new live recording, The Bitch Is Back, is a good introduction to the veteran rocker’s music.  Ford, who started her career decades ago as a member of the famed Runaways, proves with this latest live release that she still has plenty left to offer her audiences.  From the show’s set list to the audio mix to her general presence, there is much to like about this new live recording.  All things considered, Ford should have titled this recording, The Bitch Is Here instead of its given title.  Regardless, it proves in the end to be one of the year’s top live CDs.

The set list chosen for Ford’s 2013 show at California’s famed Canyon Club is the first part of what makes The Bitch Is Back so enjoyable for audiences.  Most of the songs chosen for this show come from her 2012 album, Livin’ Like a Runaway.  However, there are some older tracks included in the set list presented on this recording.  One of the best of the songs included in this recording is ‘Can’t Catch Me.’ She explains to the audience in attendance that the song was spawned after a chance meeting at the Rainbow Room.  Who would have ever thought that Lita Ford and Lemmy Kilmister would collaborate?  Regardless, the result is a fun, high octane piece that bears all the trademarks of classic Motorhead.  It’s little tidbits such as this that Ford shares through her set that makes this recording even more fun.  But that will be discussed later.  Ford’s collaboration with Lemmy Kilmister is just one of the high points that fans will take away from The Bitch is Back.  She also includes ‘Hate’, which is just one of the songs that she pulled from Livin’ Like a Runaway.  The song’s lyrical side is a powerful social commentary about society’s seemingly growing obsession with violence and hate.  It’s not such a stretch.  One need just look at the content of today’s TV shows and movies and one will agree that Ford is right on the mark here.  Her driving guitar riffs expertly compliment the song’s lyrics, making it one more high point of the show.  There is so much more that could be discussed concerning the show’s set list.  Allegedly, there were even a number of songs from the show not included in this recording.  If that is indeed the case, then maybe fans will get the remainder of those songs in a future live release.  To that extent, one could argue that by not including all of the songs from her show, Ford has left fans wanting more in the best possible way.  Again, that just makes this recording all the more worth hearing.

The set list included in this recording is the center of what makes it so enjoyable.  However, it isn’t the only part of what makes it so enjoyable.  The recording and mastering work done by Bill Gall and Fernando Cavasos respectively makes the record all the more worth the listen.  Indoor venues always present their own set of challenges when recording live performances.  This is the case regardless of whether one is recording a pop star, rock band, rapper, or some other act.  So it goes without saying that Gall and Cavasos did an impressive job in making sure that Ford’s fans were presented with the best product possible.

The final audio mix presented in The Bitch is Back works in tandem with the recording’s set list to make it a record that is a good introduction to first time fans.  The final product is just as good for those fans that are more knowledgeable of Ford’s body of work.   For everything already noted, there is still one more piece to this recording that can’t be ignored.  That piece is Ford’s own performance.  As with the set list, so much could be noted.  There just isn’t enough space or time for it all.  While this recording is only the concert’s audio portion, one can tell simply by listening, that even after so many decades, Ford has not lost a single bit of steam.  As a matter of fact, the level of energy that she exhibits throughout the performance echoes the energy and stage presence of her fellow veteran rockers in their heyday.  That stage presence is the final proverbial nail for this recording.  Alongside the expert audio mix and equally impressive set list, it makes this record that much more of a must hear for any Lita Ford fan old and new alike.  It is available now in stores and online.  After fans pick up her new live release, they can also make plans to see her live once she hits the road again in the new year.  She is currently taking some much needed rest and relaxation in order to get recharged before hitting the road again.  She is currently slated to kick off 2014 with a live performance on January 9th at the world famous Whiskey A Go Go in West Hollywood, California.  That show will be followed by performances in Nevada and more dates in California.  Fans can get the latest tour updates, news and more from Lita Ford online at http://www.facebook.com/litaofficial and http://www.LitaFordOnline.com.  To keep up with the latest sports and entertainment reviews and news, go online to http://www.facebook.com/philspicks and “Like” it.  Fans can always keep up with the latest sports and entertainment reviews and news in the Phil’s Picks blog at https://philspicks.wordpress.com.