Carlene Carter and her band The Lucky Ones will host two streaming performances this month.

The group is scheduled to hold the events on June 17 and June 24. Each concert was previously recorded at the Cash Cabin in Hendersonville, TV. The first of the concerts will focus on the musical legacy of the Carter Family while the second will focus more on Carlene Carter’s own material.

The concerts will feature a who’s who list of country music guest stars. Among those who took part in the special performances were Emmylou Harris, Rodney Crowell, and Elizabeth Cook. Members of Carlene Carter’s own family, including her own daughter also participated in the concerts.

According to comments from Carter herself, the idea for the event came about by chance.

“I did this birthday party for mom in my house with a bunch of balloons and flowers last year, and the idea of doing something at the Cash Cabin this year just blossomed,” said Carter. “It started out very small – just me, then a trio, then my whole band. 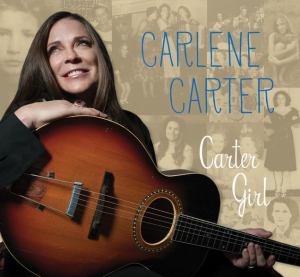 Veteran country musician Carlene Carter has crafted in her latest release Carter Girl an album that is without a shadow of a doubt, one of the top new country albums of 2014. The album, which was released early this month on Rounder Records, is one that in her own words, she had wanted to make for some time. She explained that “the songs on the album cover three generations of Carter Family music.” She pays homage to her family’s history, too in her take of ‘Lonesome Valley.’ Another of the album’s highest moments comes in the more up tempo take of the standard ‘Gold Watch and Chain.’ ‘Poor Old Heartsick Me’ will also impress listeners as its more upbeat sound is totally contrary to the song’s lyrics. These are just a few examples of why audiences will enjoy Carter’s new album. Audiences will each have their own reason for enjoying it. Regardless of which song or songs one chooses as one’s favorite, every listener will agree that this record is one of the best new country albums of 2014.

Carlene Carter noted in interviews that she had wanted to make Carter Girl for some time. That’s because, as she said, “the songs on the album cover three generations of Carter Family music.” The most obvious thought in terms of paying tribute to musicians is that imitation is the sincerest form of flattery. But Carter’s updated rendition of the Carter Family classic isn’t just imitation. She partnered with fellow veteran Vince Gill on this song to make a heartbreaking piece that pays tribute to both her own mother and stepfather. Gill’s vocals blend almost seamlessly with those of Carter in the song’s chorus to make it seem almost like he’s not even there. The vocals are that tight in those sections. Even when Carter is singing by herself, she holds her own, singing, “Well Junie never knew a stranger/She was friendly like that/So we stood with our relations/And a bunch of strangers dressed in black/Me and Rosey wore bright colors/Momma woulda liked it like that/We laid her near her momma/Sing ‘Circle Be’/She always said she wanted that.” She sings these lines not so much with pained recollection, but more with a certain bittersweet feeling. That vocal style evokes so much emotion and makes this song one of the album’s best moments.

Carter’s update on ‘Lonesome Valley’ is such a powerful moment because of the emotion that it evokes. That is thanks to the musicianship of both Carter and Gill. An equally powerful but less bittersweet moment that Carter shares with her listeners on this album is her cover of ‘Poor Old Heartsick Me.’ Considering the song’s sad, standard lyrics of love lost, the song’s more up-tempo musical side gives the song a whole new identity. It starts off sounding like it’ll be the most commonly known down-tempo, woeful song. But the increased energy in this rendition makes it difficult to be down. If anything it almost makes it uplifting as it lets listeners know they aren’t the only ones to have ever gone through heartache in their lives.

‘Lonesome Valley’ and ‘Poor Old Heartsick Me’ are both excellent examples of what makes Carlene Carter’s new tribute album of sorts such an impressive release. Listeners can take away from Carter Girl at least one more example of what makes this such an impressive release. That example is Carter’s cover of ‘Gold Watch and Chain.’ This is typically a much slower and more somber piece when performed by most artists and bands. In Carter’s case though, it is more up-tempo. And the addition of Carter’s cousin Lorrie Carter Bennett makes the song even more enjoyable in this rendition. The two-part harmonies crafted between the women are just as subtle as those in her duet with Vince Gill on ‘Lonesome Valley 2003.’ Those harmonies set alongside other subtleties such as the addition of a mandolin part and what sounds like an old organ in the background round out this wonderful addition to Carter’s album. It is one more wonderful addition to Carter’s new album. And it isn’t the only one, either. Audiences can find their own favorites now that Carter Girl is available in stores and online. It can be ordered direct from the Rounder Records website at http://www.rounder.com/2014/02/new-releases/carter-girl . It can also be downloaded via iTunes at https://itunes.apple.com/us/album/carter-girl/id828726425 and Amazon at http://www.amazon.com/Carter-Girl-Carlene/dp/B00HYCINKQ/?tag=concordreco0c-20. 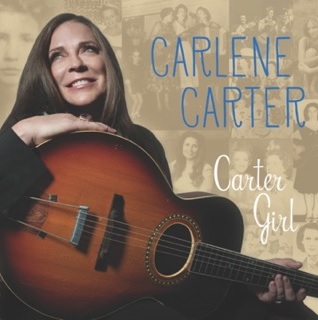 Carlene Carter, the daughter of the late June Carter Cash and country music legend Carl Smith, will release her latest album this Spring.  Carter will release Carter Girl on Tuesday, April 8th via Rounder Records.  The album is Carter’s first collection of new material in a decade.  The album was produced by Don Was and mixed by Bob Clearmountain.  Along with producing the record, Was also handles bass duties on some of the songs included on the album, too.

Carter explained in a recent interview that she has anticipated making this record for many years.  She explains that she has wanted to make this record for so long because in her own words, “The songs on the album cover three generations of Carter Family music.”  She even shares writing credit with A.P. Carter on the update of the classic Carter song, ‘Lonesome Valley’ in ‘Lonesome Valley 2003.’  The update is a musical expression of her reaction to the loss of her mother, sister and legendary stepfather, Johnny Cash eleven years ago.  It isn’t the only Carter classic that is re-visited on her new record.  She also included a handful of songs from the Carter Family songbook next to her own original works.

The songs that were culled for this album are just part of that which audiences have to look forward.  Major names such as Vince Gill, Willie Nelson, Kris Kristofferson, the late “Cowboy” Jack Clement, and Elizabeth Cook  each make appearances throughout the album’s dozen total tracks.  Lorrie Carter Bennett, daughter of Anita Carta also adds her talents, as does Carlene Carter’s own husband, Joe Breen.  They were joined by session musicians Jim Keltner, Rami Jaffee, Greg Leisz, Sam Bush, Mickey Rafael, and Blake Mills.

‘Little Black Train’, the lead single off of Carter Girl is streaming now online at USA Today’s official website.  Audiences can hear it now at http://www.usatoday.com/story/life/music/2014/02/10/song-premiere-carlene-carter-little-black-train/5325175/http://.  The complete track listing for Carter Girl is listed below.

2. Give Me The Roses

3. Me and The Wildwood Rose

5. I’ll Be All Smiles Tonight