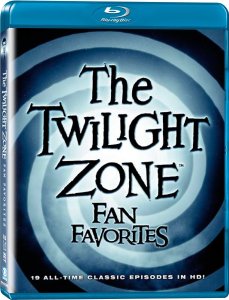 Image Entertainment is preparing to re-issue the first three seasons of The Twilight Zone on DVD in May, June and July respectively.  Whether these new lower cost re-issues will be available in stores or exclusively via Amazon.com is still up in the air.  Even if they will be available exclusively online via Amazon, they are still sets that will be worth ordering considering that they will be far less expensive than their previously released DVD counterparts and will allegedly have much the same features as said sets.  In the meantime, audiences who are perhaps new to The Twilight Zone can check out last year’s Blu-ray release of The Twilight Zone Fan Favorites.

The Twilight Zone Fan Favorites is a good introduction for anyone that is new to the world of this classic series.  The recently released Blu-ray collection is a mirror image of its DVD counterpart.  It boasts all of the same episodes in the same order, only in high definition.  For this critic alone, this set is made enjoyable by no fewer than half of the included episodes.  The reason for that is the writing of said episodes.  Among the best of those episodes is: ‘The Monsters are Due on Maple Street ’,‘ The Lonely and what is in this critic’s eyes the series best episode hands down, ‘Night of the Meek.’  The writing on these episodes is just a small sample of what makes this classic show timeless.  In the case of ‘The Monsters are Due on Maple Street’, audiences get a commentary on human nature in dire circumstances that still stands true decades after it originally debuted.  ‘The Lonely’ offers viewers commentary on the basic human need for companionship and what it can do to a person.  And the most underrated of Twilight Zone episodes, ‘Night of The Meek’ is one of very few episodes from the series that has a happy ending.  It’s also the show’s only holiday themed episode.  Now, none of these episodes are the only ones from the series that offer such themes.  But they do offer a solid glimpse into everything that has made The Twilight Zone a hit to this day.

The writing behind The Twilight Zone goes a long way toward the show’s continued success for so many decades.  It’s just part of what makes this latest set of fan favorites a solid release.  Audiences get in this collection, a full set of episodes presented exactly as they had run in their original airings, complete with promo for the next week’s episode of The Twilight Zone and even for other shows on its home network, including The Andy Griffith Show and others.  That Image would strive to maintain the show’s episodes from their original airings in this set is a credit to this company and gives great hope for the upcoming DVD re-issues of the show’s first two seasons over the next two months.  The Twilight Zone Fan Favorites is available now and can be ordered online via Amazon at http://www.amazon.com/gp/product/B007FZ7LRI/ref=s9_psimh_gw_p74_d0_i1?pf_rd_m=ATVPDKIKX0DER&pf_rd_s=center-2&pf_rd_r=0X7DGQ8H39NK7G3P4Q4X&pf_rd_t=101&pf_rd_p=1389517282&pf_rd_i=507846.

If there’s one thing that Los Angeles is known for, it’s the high class hotels and busy lifestyle.  So who would have ever thought that it would be possible to have a taste of the country life right in the heart of one of the country’s biggest cities?  Now anyone visiting L.A. and the surrounding area can get just that thanks to the new Farmer’s Daughter Hotel.

The Farmer’s Daughter Hotel is in the heart of Los Angeles, within walking distance of the famed CBS Studios (where The Price Is Right is taped each day).  It’s also very close to Museum Row and the pedestrian friendly region of 3rd Street and Melrose.  The hotel mixes high class with country living all into one setting, letting guests get away without being too far away from it all.