It looks like the Megadeth drummer carouse has finally stopped spinning.

The band has announced that Dirk Verbeuren is the band’s new full-time drummer.  In taking on the new position Verbeuren has stepped down as a member of Soilwork.  In his place drummer Bastian Thusgaard has been tapped to take over drumming duties for the band.  Verbeuren has been performing with Megadeth in recent months, taking the place of Chris Adler (Lamb of God), who had originally filled in after Megadeth’s previous full-time drummer Shawn Drover left the band alongside guitarist Chris Broderick in 2014.  The pair went on to form Act of Defiance with vocalist Henry Derek and bassist Matt Bachand.

Soilwork front man Bjorn “Speed” Strid shared his thoughts on Verbeuren’s departure in a statement released to the press.  He was completely supportive of the decision both on the part of Megadeth and Verbeuren.  “In regards to the statement Megadeth released yesterday, confirming that Dirk will join them as their full-time drummer, I just want to take the time to wish Dirk good luck on this new venture and thank him for 12 great years together,” he said.  “Together we have created a beast of a band and have pushed the limits musically further than we ever could have imagined.”  Strid also made mention of Thusgaard’s new appointment with the band in his statement, noting “Meanwhile, I’m sure many of you have seen us at a festival in Europe this summer with our friend, Bastian Thusgaard filling in on drums and I’m sure we can all agree on what a monster he is. Thank you Bastian, you are absolutely killing it. Check out the remaining festival dates and come see us. We’ll be there. Thank you.”

Verbeuren was just as warm in his thoughts on his time with his now former band mates in his own statement.  He also offered up his thanks to his new band mates, and fellow musicians in making his transition.  “They say the biggest decisions in life are the hardest to make,” he said.  This decision falls under that category. As a drummer I’ve always enjoyed the evolution of my path. The past twelve years with Soilwork have been incredible, a portion of my life I honor with pride. When I was approached to join Megadeth- a childhood dream come true and something I never anticipated. I was beyond excited to even consider the realm of possibility. But truth be told, I couldn’t have rightfully made this step without the support and blessing of my Soilwork family. For that I owe a huge thank you to Bjorn, Sven, David, Sylvain and Markus. You have allowed me to see what lies ahead, and you’re my brothers in metal. Chris Adler, thank you for introducing me to Megadeth and for your encouragement and support. Dave, David and Kiko, I’m thankful for your warm welcome and thrilled to perform and create badass music with you guys. To the fans, this is a new chapter for us; I hope we can enjoy this ride together!”

In regards to what fans have to expect from Soilwork and its sound as it moves ahead Strid had the following to say:   “In the recent years Soilwork have found new ways of expressing ourselves and as much as of a cliché it is, I strongly believe that this is very much of a new era for us and that we still have so much left to say, whether it being with or without Dirk. This band has grown to be quite a metal collective and an institution that paves the way creatively and we hope that you, the fans, can feel the presence and the heart in our music still to this day. Believe me, it’s there. I can assure that you will forever get 100% Soilwork, as long as we release albums. We aim to surprise ourselves and the listeners by constantly developing our sound and songwriting, something I believe we have succeeded in doing and yet remained true to our roots. That is something to be proud of and we are. We appreciate all our loyal fans and are excited that so many of you share our musical vision.”

Soilwork has a string of festival dates currently scheduled for August.  Those live dates will be followed up soon after by a short string of UK dates with Arch Enemy.  It will have one headlining date on that schedule, too.  After that stretch the band will take some time off before launching a South American tour on September 9th in Rio De Janeiro, Brazil.  The tour is currently scheduled to run through September 20th in Guadalupe Inn, Mexico.  The band will take off the rest of the year after wrapping that tour and will then go back out on the road for a European tour with Kreator, Sepultura, and Aborted beginning February 1st in Metz, France.  That tour is currently scheduled to run through March 4th in Essen, Germany.  The band’s current live schedule is noted in full below.

Death Resonance, Soilwork’s new compilation record, will be released Friday, August 19th via Nuclear Blast Records.  Audiences can pre-order the record online now here.  Audiences can also order the band’s most recent album The Ride Majestic online on CD, vinyl, and digital formats.  While ordering the band’s new music audiences can also check out the videos for a pair of songs from The Ride Majestic—‘Death in General,’ and ‘Enemies in Fidelity’—online, too.  The album’s title track is streaming online, too via YouTube. 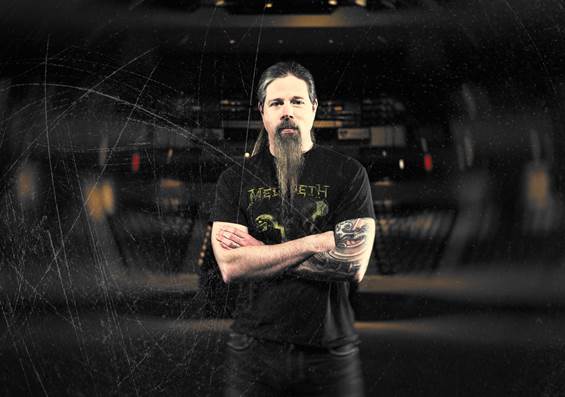 The rumors have finally been confirmed and one piece of the puzzle is now in place for Megadeth’s album.

Lamb of God drummer Chris Adler has officially confirmed as the drummer for Megadeth’s next album. The confirmation comes after rumors swirled around whether or not Adler would take the place of recently departed drummer Shawn Drover. This is not the first time that Adler has been the center of some major rumors. His name was recently thrown into the mix after former Slipknot drummer Joey Jordison was replaced by a then-unnamed drummer. It was widely speculated that Adler was the man responsible for the drums on Slipknot’s new album .5 The Gray Chapter. But it was later revealed that drummer Max Weinberg’s son Jay Weinberg had taken over drumming duties for the band.

Megadeth front man and founder Dave Mustaine released a statement in regards to the announcement noting his outlook for the new album with Adler on board even in a studio-only position saying, “Chris is a tremendous talent, and an amazing person. He is going to bring a new level of excitement and energy to MEGADETH that the fans are going to lose their minds over.” He also noted his respect for Megadeth’s former drummers in the grand scheme of things saying, “I have nothing but respect for my previous drummers, but this is going to absolutely KILL! Along with these sentiments, Mustaine also gave a big thanks to Adler’s band mates in Lamb of God for allowing Adler to lend his talents to Megedeth’s new album noting, “I want to thank the other members of Lamb Of God for allowing this opportunity to take place for all of us in the metal community.”

Mustaine’s band mate, bassist David Ellefson, added his own thoughts on the announcement of Adler helping the band record its next new album saying, “Chris has been an endearing friend to us in MEGADETH for many years now, and he truly appreciates our music and its legacy. His drumming has forged such an innovative and ferocious path for metal music and I’m very proud that he is anchoring our rhythm section with us on this new album. I can clearly see a new dawn of ‘utmost heaviness’ unfolding in MEGADETH’s next chapter.”

In speaking with the media about the announcement, Adler explained Megadeth’s influence on his own decision to follow a path in the music industry. “MEGADETH was the game changer for me. Growing up, there was no other band that meant as much to my musical interest and direction,” he said. “There is no doubt I would not be doing what I have been doing for the past three decades had I not stumbled across ‘Killing Is My Business’ and the bible of all metal, ‘Peace Sells’ in my formative years.” He went on to explain how a tour between Lamb of God and Megadeth roughly a decade ago is what initially might have gotten the wheels rolling on this partnership. “About 10 years ago, LAMB OF GOD toured with MEGADETH and I was able to share that story with Dave and David, and we have kept in touch ever since,” he said. “When Dave called me a while ago and asked if I was interested in making a thrash metal album with him, I felt like I must’ve been on a hidden camera show. “I was trying to play it cool, but I was speechless other than YES! Once I called my wife and my band guys to let everyone know, I had some time to really think about it and how I can best fit into this situation. I’m coming into this on fire. There is an incredible amount of respect, but the goal here is to make the very best thrash album we can. Together, I believe we can do something very special! Get ready for a very exciting chapter in the MEGADETH legacy.”

For all of the optimism and openness in these statements, there was also a slightly cryptic comment in regards to departed Megadeth guitarist Chris Broderick from Mustaine. Mustaine noted subtly in his comments that “Back in 1989, MEGADETH originally worked as a three piece – guitar, bass and drums – when we laid down the framework to our GRAMMY® nominated platinum album Rust In Peace.” Whether or not this was meant to leave some discussion, it leaves a question mark as to whether or not there are plans to replace Broderick or keep Megadeth a three-piece. When and if an update on this happens, it will be announced online along with other Megadeth news at: