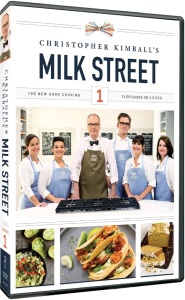 Christopher Kimball’s Milk Street: Season 1 is currently scheduled to be released Jan. 30 on DVD and Feb. 12 on Digital HD.  The series’ debut season will be spread across three discs at a total run time of 390 minutes.  It will retail for MSRP of $34.99, but can be pre-ordered now at a reduced price of $29.99 via PBS’ online store.

Season One of Kimball’s new program features cooking lesson segments taped in-studio, tips and techniques that everyday cooks can use in the kitchen, and product test segments, just as in Kimball’s previous series.  Season One also takes viewers around the globe to learn about various dishes and more.

More information on Christopher Kimball’s Milk Street is available online now along with all of the series’ latest news at: