Country music is big business nowadays.  One need only look at shows like The Voice and America’s Got Talent to see that.  Also, look at the ratings for the Country Music awards shows that air on television every year, as well as the overall record sales and the glut of country music stations airing the past, present and future of the genre nationwide.

Keeping in mind the popularity (and ongoing success) of said genre, it is only fitting for the genre to get its own list of the year’s top new albums.  Phil’s Picks has compiled its own list of those albums, and it — like the noted radio stations — features a who’s who of country music’s past, present and future.

Second on this year’s list is fellow country musician John Prine and his new album The Tree of Forgiveness.  The soul in his lyrical themes and his performance make this song so powerful.  It is an album that every country music purist needs to hear.

Taking the third spot in this year’s list is Shooter Jennings, Waylon’s boy.  Shooter is everything that audiences have come to expect from him over the course of his career.  Yet again, listeners get more growth both musically and lyrically from the outlaw country musician that continues to place Jennings in his very own place separate from his contemporaries.  Again, this is another must for those who want to avoid all of the pop country that currently pollutes the country music scene today.

Moving on, the rest of this year’s list features some unexpected names and some more familiar names mixed in for good measure.  As always, the list features 15 total names and titles.  The top 10 are the best, and the next five are honorable mention titles. 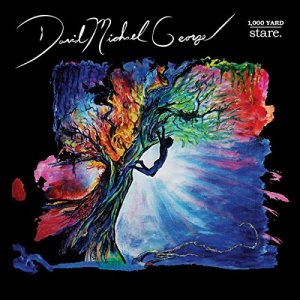 Late this past March, independent musician David Michael George released his latest full-length studio recording 1,000 Yard Stare online.  While the record is only spread across six songs and 24 minutes, it impresses from start to finish with its varied musical arrangements and lyrical themes.  With its mix of bluesy, funky arrangements, it is certain to appeal easily to fans of the Tedeschi Trucks Band, Marc Broussard, Joe Bonamassa and even Etta James among so many others.  Its lyrical content is just as certain to keep listeners across the board engaged and entertained.  Those statements are supported right from the album’s outset in its infectious opener ‘Step Aside.’  It will be discussed shortly.  The slow bluesy ‘Just Ain’t The Same’ also serves to support that statement.  It will be discussed later.  The gentle, flowing ballad that is ‘Sink or Swim’ also serves to support that statement in its own way.  Each song noted here is important in its own way to the whole of this album, and are certainly not the only songs that could be cited in showing what makes this independent album a surprisingly shining diamond in the rough.  The other trio of songs not directly noted here plays its own part in its whole, too.  All things considered, they make 1,000 Yard Stare not just an impressive new effort from David Michael George, but also one more of this year’s top new independent albums.

David Michael George’s new album 1,000 Yard Stare is one of this year’s most surprising new albums, especially among his independent contemporaries.  As noted prior, that is due in part to six musical arrangements that will appeal to a wide range of listeners.  Its lyrical content is just as certain to appeal to listeners across the board.  The album’s opener, ‘Step Aside’ is just one of the songs that supports those statements.  This song’s arrangement lends itself easily to comparisons to compositions from Marc Broussard, Joe Bonamassa and Tedeschi Trucks Band with its guitars, vocals and drums.  If one wanted, one could potentially even make a comparison to Lenny Kravitz here.  If all of those comparisons are not enough reason to hear this song, its simple lyrical content is certain to give audiences reason to take in the song.  George sings here, “Well I see some things/That I cannot explain/Yeah, down in the hole so far that I can’t even sink…I see no tomorrow, but I feel that other side…If you don’t get up now/Before I put you down/You’ll be on the path to yesterday’s sorrow/You’d better testify.”  He goes on to sing in the song’s second verse, “Yeah, I was caught in a trance/Doin’ a dead man’s dance/All full of life/Filled with foolish romance/I tried to change/In mysterious ways/Yeah, I feel no tomorrow/Feeling half insane/Better get back, babe…if you don’t get up now/Before I put you down/You’ll be on the path to yesterday’s sorrow.”  As always, this is the interpretation of this critic alone, but this comes across as being a subject singing about not giving up hope.  This is inferred as George sings, “I see no tomorrow/But I feel that other side.”  That seems to be a message of perseverance of sorts.  The song’s second verse hints at that just as much, as does the upbeat musical arrangement.  All things considered here, they make this song such an enjoyable work and one that thanks to that seeming positive message, makes the song a strong start for the album and just one example of what makes this record in whole so enjoyable.  ‘Just Ain’t The Same’ is another example of why this record stands out.

Just as is the case with the previously discussed songs here, ‘Sink Or Swim’ stands out because its arrangement changes things up for listeners yet again.  This time, there’s still a touch of blues, but it’s more akin to songs from Marc Broussard.  One could even argue a comparison to Edwin McCain and other similar singers.  The inclusion of the organ and choral style backing vocals add even more to its whole.  While that content is important to the whole of this song – because of how it stands apart from the rest of the album’s works – it is only part of what makes the song stand out.  Its lyrical content helps it stand out, too.  George sings here, “Make it a part of your every day/Before you forget me/Make sure that I’m to blame/Wait until I bypass you/We can’t carry on/When we know we’re being used/I saw it coming, miles away/I shout it out I want it/They don’t hear these words I say/Don’t give wisdom to fools/Turn it around/And use it against them/Sink or swim/I’m going my own way…you can only see/We can’t touch the sun…”  He goes on to sing of what sounds like social unity as he sings, “Seems so muddy/All the time/Stop suffocating each other/For a little while/All the screaming goes nowhere/Some won’t even listen/Yeah, some don’t even care/Sink or swim/I’m going my own way…You can only see/We can’t touch the sun…”  This all comes across as a social statement of sorts, maybe in response to everything going on in the country today.  That is hinted George sings about the “screaming” and “people not listening.”  If that is indeed the message here, then it is a wonderfully moving way to get that message across.  It honestly throws back to the days of Pete Seeger and others in that wording.  When that familiar lyrical style is coupled with the deeply moving musical arrangement here, the end result is one more song that shows the reach of George’s talents.  When it is considered alongside the previously discussed songs (and those not discussed here), the whole of this album becomes a record that is just as good as anything that George’s mainstream counterparts have ever released.  That is a powerful statement.  That being the case, it proves to be not just an enjoyable indie record, but one of this year’s top new independent albums.

David Michael George’s new album 1,000 Yard Stare is a true diamond in the rough in this year’s independent music scene.  That is because it is a record that is just as enjoyable as anything that its mainstream counterparts have proven to be both present and past.  It is a record that shows such potential for George’s future, given the right support.  As has been noted in this review, that statement is supported in an examination of the album’s bluesy soulful opener ‘Step Aside.’  The same can be said of ‘Just Ain’t The Same’ and ‘Sink or Swim.’  When these songs are considered alongside the bluesy, southern rock sound of ‘River Don’t Rise,’ the funky rhythms of ‘Find My Way Home’ and the light southern rock sound of ‘Villain,’ the whole of these songs makes 1,000 Yard Stare a record that blues and rock fans alike will appreciate, and in turn agree is one of this year’s best new independent albums.  It is available now.  More information on 1,000 Yard Stare is available online now along with all of David Michael George’s latest news and more at:

Independent musician David Michael George released his new album 1,000 Yard Stare late this past March, and in celebration of its release, the funk-rocker has announced a new performance.

George will hold an album release party May 26 at Three Links Deep Ellum in Dallas, Texas.  George debuted the lyric video for the record’s latest single ‘Find My Way Home‘ in March 19.  Musically, it is a work that will appeal to fans of Marc Brussard, Tedeschi Trucks Band, Joe Bonamassa and other similar acts.  The soulful song’s lyrical theme comes across as someone saying he is just trying to do the best that he can in life.

The lyric video for ‘Find My Way Home’ came only two weeks after he premiered the video for the equally soulful, bluesy ‘Just Aint’ The Same,’ which shows even more the reach of George’s talents (and those of his fellow musicians).  Both musically and lyrically, this song so clearly hints at great works from the likes of Etta James, Ray Charles and so many other similar acts.  It is a stunning work to say the least that adds to 1,000 Yard Stare.