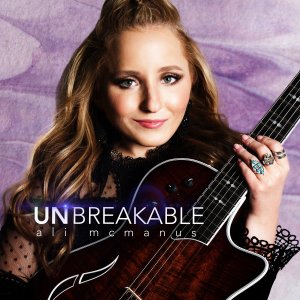 Singer/songwriter Ali McManus is, right now, likely not one of the most well-known figures in the musical universe. However, thanks to her recently released EP Unbreakable, she could easily make quite the name for herself within the realm of adult contemporary artists. That statement is supported in part through the musical arrangements presented within each of the record’s six songs. They will be discussed shortly. the songs’ lyrical content supports that statement just as much as the EP’s musical arrangements. When they are considered alongside the EP’s sequencing, the three elements together fully prove and support that statement that Unbreakable is a strong start to McManus’ career.

Unbreakable, the new six-song EP from up-and-coming singer/songwriter Ail McManus, is a strong new effort from the 21-year-old Michigan-based musician. It is a work that is certain to resonate with any adult contemporary audience, from radio programmers to listeners. This statement is supported in part through the musical arrangements exhibited throughout the record’s 25-minute run time. From start to finish the arrangements presented throughout are easy fits on any mainstream adult contemporary station. The record’s opener and title track presents an arrangement that would even fit into any Christian radio station’s lineup. That is of course just this critic’s own thought. Even though there is no Christian imagery in the song’s lyrical content (which will be discussed later), something about its wording couples with the music to make it feel like it fits perfectly into that genre, too. ‘Rhythm That Rhymes’ and ‘Breaking Free’ both present more of a country vibe, with the prior even boasting something of a folk sound, too. ‘Wings,’ with its blues-rock-based arrangement will easily appeal to audiences of all ages while ‘Heart Shattered’ and ‘Home’ will each touch listeners in their own unique ways. The emotional ride on which McManus takes listeners over the course of these songs is in itself proof enough of the strength of this new effort from McManus. It is just one part of the whole that proves the EP in whole is a strong new effort. The record’s lyrical themes serve to support that statement just as much as its musical arrangements.

The lyrical themes presented in the songs are so important because of their accessibility. From the disc’s opener all the way to its fourth track, ‘Wings,’ McManus presents messages of hope and optimism. In the disc’s opener, she sings, “I am what I am/And I love where I stand/Yeah, I can’t stand for long/But I’m goin’ strong/I’m unbreakable.” She leaves no question as to her message here. ‘Rhythnm That Rhymes’ presents a similarly positive message in which McManus tells listeners not to give up in life. That is evident as she sings, “Your confidence will grow slowly/Once you accept who you are/Every day at a time/You’ll surely find/A rhythm that rhymes.” That short line sums up the whole song. It is meant to be an inspiring work that reminds audiences to stay on that proverbial brighter side of life. ‘Breaking Free’ is yet another positive work, lyrically speaking as is evident when McManus sings, “What if I’m special/Like no one else/What if I’m happy just the way that I am/Maybe I’m lucky/Look at all that I have/I’m breaking free/Free to be who I am/I’m breaking free because I can/I’m breaking free just how I am.” This directly echoes the optimism presented in the record’s first two songs’ lyrical themes, in turn tying each together. It isn’t until the record reaches its fourth track, ‘Heart Shatters,’ that McManus turns things emotional in a different direction. That song is the EP’s only song about a broken relationship, and McManus goes full force in this one, ensuring anyone (especially female audiences) will be moved. ‘Home,’ the record’s finale celebrates family as McManus sings, “You’re at home with the ones you love/You’re at home with the ones you find within your life/Success means nothing unless you have someone to share it with…This winding road/Will never go straight/It may start to curve in any which way/You should always know your way home.” It’s one more positive message that McManus shares with listeners over the course of the record. When all of those positives are set alongside the record’s lone breakup song, the whole of the messages shows clearly why the songs’ lyrical themes are so important in proving what makes this record a solid effort from her. When they are joined with the songs’ musical arrangements, the two elements join to prove even more why the EP boasts a strong foundation. That whole still is not the last of the record’s most important elements. Its sequencing rounds out the most important of its elements.

The sequencing of the record’s energies is just as important to proving Unbreakable’s strength as its musical and lyrical content. As a matter of fact, it ties directly back to the arrangements, bringing everything full circle. The gentle, flowing piano line at the center of the record’s title track, followed by the equally laid back groove of ‘Rhythm That Rhymes’ establishes a solid transition from one song to the next that in itself will ensure listeners’ maintained engagement. That is especially considering the fact that the two songs stand separate from each other stylistically. The juxtaposition of ‘Breaking Free”s gentle verses and its stronger chorus sections gives this song its own energy and identity. That identity, when considered alongside the energies of the record’s first trio of songs, it makes the EP’s emotional impact that much stronger. McManus changes things up dramatically in ‘Wings,’ the record’s penultimate song. This song is a much more upbeat song that stands starkly separate from anything else in the EP. Its positive musical and lyrical energy gives listeners plenty to smile about. That energy gradually pulls back in the record’s last two songs, eventually returning to the gentle, flowing energy established in the disc’s opener, again bringing everything full circle in another way. By the time it all ends, the energies in the songs overall couples with the arrangements and the lyrical themes to show in full why this record is a strong effort from McManus and why it could be a strong starting point for the up-and-coming adult contemporary friendly artist.

Ali McManus’ new Ep Unbreakable is a good, solid start for the young, up-and-coming singer/songwriter from Michigan. It is a record that easily makes a place for her within the adult contemporary world. That is evident through musical arrangements that fit most easily within that realm in each of its six songs. The largely positive lyrical content is something from which listeners of all ages will benefit in hearing. Though when coupled with the record’s musical arrangements, the two join to show even more why it is a strong entry into the adult contemporary realm. The energies exhibited throughout the course of the EP join with the arrangements and lyrics to indeed make the record itself a concrete new effort. Each element clearly is important in its own right. All things considered, they make this EP a strong, solid new effort from McManus. It is available now in stores and online. More information on Unbreakable is available online now along with all of McManus’ latest news and more at: