Families nationwide got a lot of worthwhile ways to spend time together during the COVID-19 pandemic this year, thanks to all of the new DVDs, Blu-rays and box sets.  Of course while families got plenty to watch together, grown-ups also needed something of their own to enjoy.  Thankfully this year produced just as much for grown-ups to enjoy as children.  That is why Phil’s Picks is taking a look at what were among the best of this year’s new DVD and Blu-ray box sets for grown-ups.  This year saw a bunch of new content from Warner Brothers and DC, some better than others (E.g. the new Swamp Thing reboot and new seasons of Black Lightning – Black Lightning proved better this year than Swamp Thing, but the latter still proved worth watching at least once.  Itv and PBS presented a rather intriguing new season of itv’s crime drama Endeavour.  The season was okay but left something to be wanted.  The short-lived deep comedy The Good Place finally met its end this year and also received its only full-series release on Blu-ray thanks to the folks at Shout! Factory.  In an even more surprising move, ABC’s hit comedy Modern Family got a full series release this month exclusively through Target.  While not inexpensive, it is a presentation that devotees will appreciate.  It is just one more entry in Phil’s Picks 2020 Top 10 New DVD & Blu-ray Box Sets For Grown-ups category.

As with every other list from Phil’s Picks, this list features the Top 10 titles in the category along with five honorable mentions for a total of 15 titles.  Without further ado, here is Phil’s Picks 2020 Top 10 new DVD & Blu-ray Box Sets for Grown-Ups.

One more list is up to finish up this year’s lists.  That list is the year’s top new re-issues.  Stay tuned for that.

CBS’ classic western series Gunsmoke is unquestionably one of the most respected and revered series of any genre in the modern history of television.  The series ran approximately 20 seasons on CBS, and went on to be nominated for 15 prime time Emmy awards, six of which it won.  That is almost half of its nominations, which is not bad, to say the very least.  The series has also never been off of television since it ended its historic run in 1975.  In fact, it still runs on Me-TV to this day.  The wife of a former CBS executive – Babe Paley – is really even to blame for the series’ survival past its 12th season and the demise of fellow CBS series Gilligan’s Island in its place.  Additionally, Gunsmoke has seen each of its 20 seasons released by themselves between 2007 and this year.  All of those standalone season sets’ releases culminated in May with what is seemingly its first-ever full-series set courtesy of CBS DVD and Paramount in the new 65th Anniversary edition box set.  Spread across a total of 143 discs, this extensive box set will appeal mainly to the most devoted of the series’ fans.  That is due in pat to the presentation of the set’s episodes.  This will be addressed shortly.  While the presentation of the set’s episodes proves a positive for its presentation, the set’s packaging proves to be a negative that cannot be ignored.  It will be addressed a little later.  The bonus content that accompanies the episode’s primary content – its episodes – is at least slightly positive even though it still leaves audiences wanting for more.  Together with the presentation of the episodes, these two elements and the negative of the packaging make the set a presentation that only the most devoted Gunsmoke fans will appreciate.

CBS DVD and Paramount’s recently released Gunsmoke collection is a mixed bag of a presentation.  It is a presentation that while it does have its positives, it also has its negatives.  The most notable of the set’s positives is the presentation of its episodes.  Considering that the series was released in standalone sets leading up to this full series presentation, it should come as no surprise that the episodes look and sound just as good if not better as they do on television.  Sure, that grainy look is there, but even after being upscaled on a Blu-ray player, they still maintain their integrity, which is certain play well into viewers’ nostalgia.  The sound is impressive in its own right from one episode to the next.  Of course that is again little to no surprise.  That is because likely those behind the set’s assembly essentially just took the already released season sets and put them together into one large box.  That eliminated the need to go back and remaster either element.  So to that end, audiences get the same audio and video presentation here as they would have in the series’ previously released standalone season sets.  Now taking into mind the sets, this is where the set takes a turn for the worse.

The one clear negative to this set is its packaging.  All six of the cases that contain the series’ 635 total episodes are placed into the back of their larger box, which boasts its own artwork on the front and sides.  This is where the problem comes into play.  Audiences who fork over the $200-$300 for this set (depending on the retailer and time of year) will have the set on their DVD/BD racks for storage, or even on another shelf.  Having no backing on the box, it is so easy for the cases to fall out and break, and/or discs to fall out and get damaged in the process.  The bigger box’s artwork is great.  That should not be misunderstood.  The problem is that lack of backing.  It would have made much more sense for the cases to be placed into a box that has a bottom and full box around them.  That guarantees the safety of the separate cases and the boxes therein.  The primary artwork could have been used as a box topper that could have been lifted and replaced.  Sadly that was not the packaging decision made here.

Making things even more difficult in terms of the packaging is the way in which the series’ discs were placed.  Again, the standalone sets used for this full series set are just the previously released standalone season sets.  The discs, in many of the cases, are stacked on top of one another inside the plastic cases.  The old style of multi-disc packaging is used once again here, just as with CBS DVD/Paramount’s full series DVD sets of shows, such as I Love Lucy, The Andy Griffith Show, and even The Twilight Zone.  This packaging method greatly increases the chances that the discs will get damaged by scratching one another or even being scratched by the boxes as they are removed and replaced.  Yes, by using a more “modern” packaging method might have made the box even larger, but audiences likely would forgive that if it meant the safety of the discs.  Keeping all of this in mind, Gunsmoke: The Complete Series 65th Anniversary’s packaging detracts from the set’s presentation, but does not make the set a total failure.  Its bonus content works with the episodes’ presentation to make the set at least somewhat worth the money. 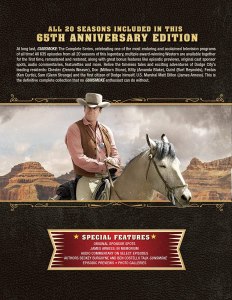 The bonus content that accompanies the Gunsmoke: The Complete Series 65th Anniversary set is sadly limited mostly to commercials in which the series’ starts took part and episode promos.  The positive doesn’t really come until Season 15.  It is in this season and each season that follows, that audiences get treated to some history of the show in a feature titled “Ben And Beckey Discuss…”  The low-budget segments are co-hosted by authors Ben Costello and Beckey Burgoine.  The duo sits in front of a drop screen that looks like one of those screens used by Olan Mills for its photos.  The backdrop is anchored by a pair of red curtains on either side, while the duo sits at a table and talks about Seasons 15-20.  Given, some of the content that the pair reveals is at least somewhat interesting, such as the lack of ego among the cast.  Burgoine points out in one of the latter season’s segments that the cast would often offer lines to one another during table reads and that the cast members cared just as much for one another’s safety on set.  The pair also talks briefly during its Season 16 segment, about how the show’s directors would just as often run shoots on single takes.  That is enlightening, and could just as easily serve as a starting point for audiences about directorial styles for directors past and present in television and movies.  During the pair’s discussion in Season 17, it is revealed that there is a direct connection between the Apollo 8 space mission and the series’ cast.  That anecdote will be left for audiences to discover on their own. Additionally, the duo discusses in the Season 20 segment, why Amanda Blake (who played Miss Kitty) did not return to the series in its final season and how that was handled in the writing.  Between all of this and more, the pair’s discussions between Season 15 and 20 will engage and entertain audiences in their own right.  The issue that all of this raises is the question of why there were no discussions in the sets for Seasons 1-14.  Up until that point, the bonus content was relegated to the noted vintage ads and episode promos.  Keeping all of this in mind, the bonus content is positive in its own right, but only to a point.  Even with this in mind, that limited content together with the episodes’ presentations comes together to make the set at least somewhat appealing to the noted Gunsmoke devotees.

Paramount and DBS DVD’s recently released Gunsmoke 65th anniversary DVD box set is an intriguing presentation.  The audio and video presentation in the episodes is positive.  Again, that is understood just because the content is in fact just the previously released standalone sets released together in one larger box for the first time ever.  The set’s packaging detracts greatly from its presentation, but does not make it a total failure.  The bonus content that accompanies the series’ set is positive in its own right because of the “background” information that is provided to audiences in Seasons 15-20.  The problem is that said bonus content is the set’s only positive bonus content.  One is left wondering why there were no season discussions on Seasons 1-14.  Taking all of this into mind collectively, this new full series presentation of Gunsmoke is sadly a lackluster presentation that will appeal mainly to the series’ most devoted fans, especially considering its price.

More information on this and other title from CBS DVD is available at: