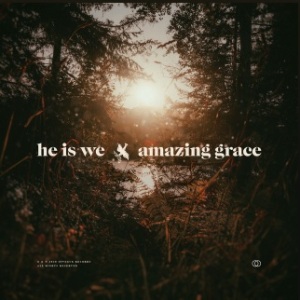 He Is We released its first new music in two years this week.

The group released its new single ‘Amazing Grace’ Friday.  Not to be confused with the popular hymn of the same name, this song shares only a name with that work.  This song presents an arrangement that will appeal widely to fans of Owl City while its lyrical theme will appeal to fans of love songs.

‘Amazing Grace’ is available to stream and download here.

He is We singer Rachel Taylor said in a recent interview, she was appreciative for all of the support that fans of He Is We have provided her and the band.

“Regardless of how far I’ve tried to run from this industry, the unconditional support has pulled me back in and reminded me of why it is I need music,” she said.  “I’m blown away that I’d given up on myself, and the heartbeat of He Is We never gave up on me.  The fan base kept air in my lungs and brought me back to life.  I just want to hug every person who held me together when falling apart became so easy.”

InVogue Records is handling the release of He Is We’s new single.  Company Owner Nick Moore offered praise for the group as he talked about the label’s part in the single’s release.

“I’ve been a huge fan of He Is We for years, so having the opportunity to release this new single, I couldn’t pass it up,” he said.  “I’m really excited to be working with Rachel on this new chapter of music she is creating.”

He Is We released its debut album in 2010.  The album accumulated more than 100 million streams following its release.  The group’s sophomore album followed in 2017, and pulled in almost 50 million streams.

More information on He Is We’s new single is available online now along with all of the group’s latest news at:

Tacoma, Washington’s He Is We has officially announced that is has made some big changes in its lineup.  the band has announced that it has brought vocalist Stevie Scott on board to handle vocal duties as health problems forced the band’s original vocalist, Rachel Taylor to leave the band.

Guitarist Trevor Kelly spoke about the new appointment.  ““He Is We has been our baby since we were 18 and it’s incredible to see how it has grown and affected people just as it has affected us,”…“Rachel has voiced that this is the right time to for her to step down for she has become unhealthy and restricted to what she can and cannot do with He Is We,” Kelly noted.  He went on to express his support for Taylor, saying, “I hope everyone supports her in this decision and continues to support her in any future endeavors she finds herself in.”

The band is currently in the process of working on new material for its upcoming sophomore album.  The band is hoping to have that album out by 2013.  Kelly did make a statement concerning fans’ reactions to the change.  “I know all of this seems unconventional and may be hard to understand, but as a fan, I want each and every one of you to know I will never give up and neither will anyone else on the He Is We team,” he said.

Fans of He is We can get all the latest news and more from the band online at http://www.facebook.com/heiswe.official.