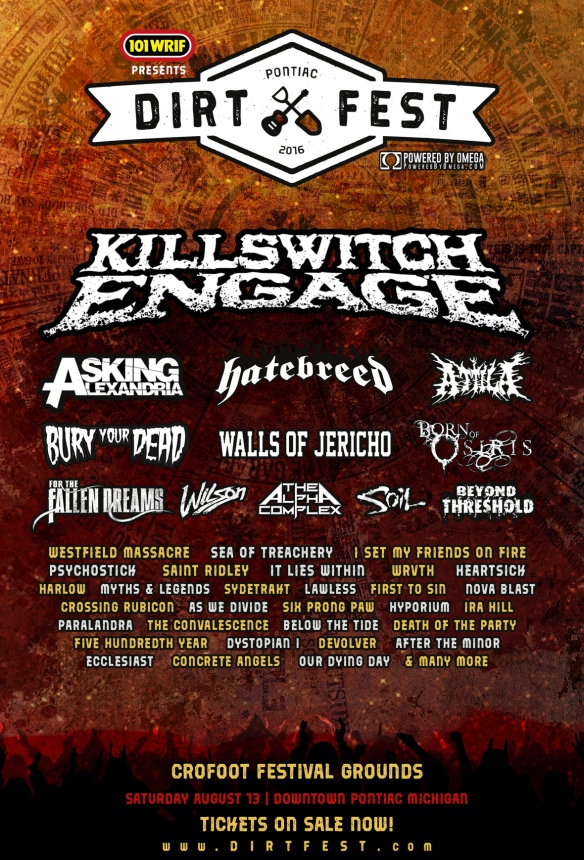 More names have been added to this year’s edition of the Dirt Fest.

r front man Michael Woodruff on vocals.  Matt Dalton is one of the festival’s promoters.  He discussed the addition of Born of Osiris and For The Fallen Dreams in a recent interview.  “I’m thrilled to have my friends in Born of Osiris and For The Fallen Dreams join our event,” he said.  This will bee the first time FTFD has played in their home state of Michigan in over two years and their first time back to Dirt Fest since 2006.  With Chad (Ruhlig) back fronting the band the timing couldn’t be better.”

This is not the first time that the annual festival, which is held every year in Michigan, has given bands from “The Great Lakes State” time in the limelight.  In 2012 Chiodos reunited after having taken some time apart previously.  And the band’s first show back was at Dirt Fest.  The performance featured original front man Craig Owens back at the helm.  Dirt Fest has also developed quite the reputation for itself for having launched the careers of other major metal acts such as: Battlecross, Wilson, and See You Next Tuesday.  Dalton discussed the festival’s reputation along with the new additions to this year’s festival in his interview.  “Our priority has always been Michigan bands and this year is no exception,” he said of the festival’s reputation.  “In addition to Walls of Jericho, Wilson, Saint Riley, and of course For The Fallen Dreams, dozens of up-and-coming Michigan bands like It Lies Within and Heartsick will have a chance to perform alongside the big guys.  You never know who the next break out artist will be.”

2016 marks the 19th year for the Dirt Fest.  Along with the bands already noted, this year’s festival lineup also features some of the biggest names in the metal community today including: Hatebreed, Killswitch Engage, Trivium, Soil, Asking Alexandria, Attila, Bury Your Dead, and many others.  It will be held at the Crofoot Festival Grounds in downtown Pontiac Michigan on Saturday, August 13th.  Tickets for the festival can be purchased online now here.  More information on Dirt Fest is available online now at: