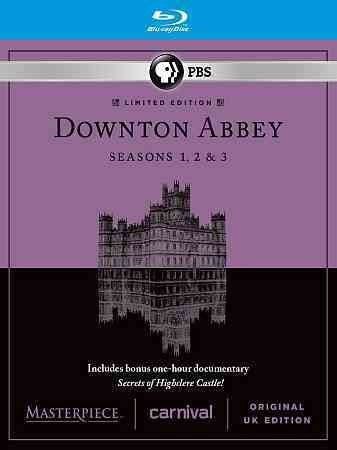 2014 is set to be a big year for Downton Abbey.  PBS’ British import has been nominated for a Golden Globe in the annual awards show.  The series’ fourth season is also set to premiere on PBS in just a matter of days.  The current date for its Season Four premiere is January 5th, 2014.  And Season Four is also currently scheduled to be released on DVD and Blu-ray January 28th, 2014.  So it goes without saying that the show’s fans have a lot to look forward to this Winter.  Before Season Four makes its U.S. premiere, the show’s fans can get caught up thanks to the new three-season gift set on Blu-ray and DVD.  This new set is a great gift for the most devoted of the show’s fans.  Not only does it include the series’ first three seasons together in their own entirety, but it also includes the companion DVD, The Secrets of Highclere Castle.  This is the central point of what this latest set offers audiences.  Those that might perhaps be new to Downton Abbey will appreciate in watching this box set the writing.  Most people don’t like the thought of watching a show about rich people.  But once said audiences allow themselves to get past that outer layer, they will be pulled in by the purely human drama that makes up the series’ plot.  The cast’s attire and the overall setting also play into the overall enjoyment of this series.  That together with the solid writing and the box’s bonus material makes this latest box set a wonderful addition to the library of any Downton Abbey fan.

Masterpiece Classic: Downton Abbey Season 1 2 & 3 is not the first of the Downton Abbey box sets released in 2013 by PBS and the BBC.  The show’s first two seasons have already been released in a special Blu-ray box set.  So what sets this latest box set apart from that set?  The first thing that audiences will notice is that the first three seasons are all included in this set.  Also included as an added bonus, is the companion documentary The Secrets of Highclere Castle.  This documentary had previously only been available as a stand-alone piece on DVD.  Now, it’s included in its proper place with this set for those that want the full show experience.  It’s not all that audiences get as a bonus, either.  There is also episode-specific commentary that adds even more to the overall experience.  It is all packaged in one relatively ergonomic set.  This is the case both with the DVD and Blu-ray box set.  And it’s just the tip of the proverbial iceberg for this set, too.

The packaging and bonus features that comprise the Masterpiece Classic: Downton Abbey Season 1 2 & 3 box set are important parts of the set’s overall presentation.  One would be remiss though, to ignore the show’s writing and its effect on the series thus far.  Most audiences don’t seem too interested in watching a TV show about a rich family.  The last time that such show had an audience as devoted as this one was the original Dallas, starring the late Larry Hagman.  What sets this rich family apart from the stereotypical aristocratic family is that its members actually don’t feel above everyone else.  The show’s writers actually give the family members a certain heart despite the cultural divide between themselves and the servants that live and work in Highclere Castle.  The family actually does everything to not get rid of the servants even in somewhat difficult financial situations.  While it may not make the family more relatable to average viewers, it does make them more human and in turn, more worthy of praise.  It makes audiences want to find out what happens next within the confines of the story, which goes back to the overall writing.  It makes the stories all the (pardon the term) richer for viewers.  And in turn, it exhibits just why the show is such a favorite among audiences and critics alike.  It shows why this is the center of what makes this new set so worth checking out especially for those that might be new to the world of Downton Abbey.

The writing behind Downton Abbey is some of the purest writing for scripted television shows today.  By comparison, it outshines so much of the programming that pollutes American airwaves today.  In direct relation to the writing, audiences that are new to this hit drama will be impressed by the backdrops and attire used throughout the show’s first three seasons.  It’s obvious that the show’s heads wanted to be as accurate as possible to the series.  They wanted to be respectful both to the show’s history and its fans.  This is something else that audiences will learn about in the set’s bonus material.  It’s nice to see that just as in Mr. Selfridge painstaking efforts were undertaken to make the series as real as possible.  That’s something else that is rarely seen in most American television offerings today.  It makes the series stand out even more.  Along with its equally solid writing and bonus features, it becomes one more part of what is one 2013’s top box sets for adults.  It is available in stores and online now, and can be ordered direct from the PBS online store at http://www.shoppbs.org/product/index.jsp?productId=29630176&cp=&sr=1&kw=downton+abbey&pg=2&origkw=Downton+Abbey&parentPage=search&searchId=29650486.  More information on Downton Abbey is available online at http://www.facebook.com/DowntonAbbey and http://itv.com/downtonabbey.  To keep up with the latest sports and entertainment reviews and news, go online to http://www.facebook.com/philspicks and “Like” it.  Fans can always keep up with the latest sports and entertainment reviews and news in the Phil’s Picks blog at https://philspicks.wordpress.com.