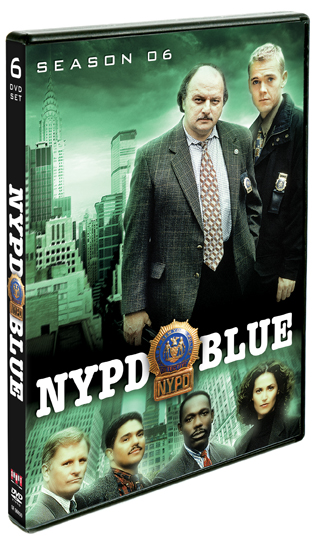 Shout! Factory will release the sixth season of the hit crime drama NYPD Blue this Summer.

NYPD Blue Season Six will be released on June 24th, 2014. Season Six of the Emmy® and Peabody award-winning series will be released in a six-disc DVD set containing all twenty-two episodes from the series’ sixth season. The series’ sixth season sees the addition of actor Rick Schroder to the show’s cast. Schroder plays the part of detective Danny Sorenson. Sorenson is Sipowicz’s (Dennis Franz) new partner this season. But he isn’t fully trusted by everybody in the department. That is thanks to his questionable methods. His arrival is just one of a number of major events that arise in Season Six.

The arrival of a new detective on the force and the major events that flush out Season Six are just part of what makes it one of the show’s more talked about seasons. This season also sees a who’s who of guest stars throughout its episodes. Terrence Howard (Hustle & Flow, Iron Man, Crash), Daniel Benzali (General Hospital), Mos Def (The Italian Job, Dexter, Hitchhiker’s Guide to the Galaxy), Kevin Dillon (Entourage), and Emile Hirsch (Twice Born, Into The Wild, Milk) all make appearances.