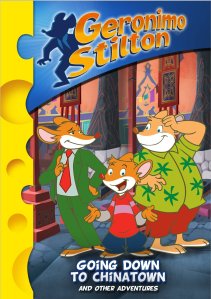 Geronimo Stilton is back again.  Everyone’s favorite rodent reporter is back in a brand new DVD courtesy of eOne.  Geronimo Stilton: Going Down To Chinatown And Other Adventures is available now on DVD in stores and online.  There is just as much to enjoy about this new DVD as eOne’s previous Geronimo Stilton compilations.  The first factor worth noting is of course the writing that went into each of the four episodes included on this disc.  Also worth noting is the series’ animation.  The original style animation to which audiences have become accustomed on previous Geronimo Stilton DVDs is present here, too.  And rounding out the whole thing is the return of the series’ voice cast once more.  All three of these factors, when taken into consideration both by themselves and collectively, show why any family will want to watch Geronimo Stilton: Going Down To Chinatown And Other Adventures.

The central reason for the overall enjoyment of Geronimo Stilton’s latest DVD compilation is the writing that went into each of the episodes included on the disc.  Stilton is essentially Scholastic’s answer to Indiana Jones.  While he’s a mild mannered reporter by day, he is also quite the adventure seeker.  In the disc’s title episode, audiences see Geronimo and his friends go on an adventure that leads to quite the unexpected end after finding a mysterious old letter and map.  What makes this episode really enjoyable is that it actually incorporates a light history lesson along the way.  That lesson is taught so covertly that young audiences wouldn’t even know.  The series’ writers are to be commended for balancing that educational content so well with the show’s more entertaining side.  The surprising end result will leave a smile on any viewer’s face as it in itself teaches quite the valuable life lesson.  And it’s just one of the wonderful lessons shared throughout these episodes that make them such a joy.  It’s just one lesson taught in this collection of episodes.  The overlying lesson that runs through each episode is that it’s perfectly fine to have a love of knowledge.  That is key to the enjoyment of these episodes more so than any other lesson.  Being that this lessons isn’t shoved down audiences throats, the end result is even more enjoyment of each of the compilation’s episodes.

The writing used in each of this set’s episodes is of the utmost importance in considering what makes the collection work.  As important as the writing is to the overall presentation, it isn’t the only factor to be taken into consideration in the presentation’s overall enjoyment and success.  One would be remiss to omit any mention of the original animation style used in this collection of episodes.  The animation style used throughout the Geronimo Stilton animated series looks to have been actually hand drawn.  While it is possible that there might have been some computer usage, it isn’t clearly evident.  If anything, the animation used in this series is similar to that of the short-lived DC series Krypto The Superdog.  Whether or not there was some computer usage, the fact remains that in an age of cookie cutter CG-based children’s shows, animation such as this stands head and shoulders above the rest.  And together with the continued solid writing, that animation makes this box set stand out among this year’s current crop in its own right.

The animation and writing that went into each of the episodes in this set both play their own role in making Geronimo Stilton: Going Down To Chinatown And Other Adventures enjoyable for audiences of all ages.  Having examined both factors, there is still one factor left to examine that makes this DVD worth the watch.  That final factor is the voice cast.  Included among the talents that worked on the series were the likes of: Brian Drummond, Erin Matthews, Sarah Edmonson, Richard Ian Cox and many other. The significance of the series’ voice cast is that many of them have also worked together on the likes of the hit anime series Inuyasha and Dragonball Z among other TV shows and movies. So, that familiarity with one another helped in its own way here as it helped to create a certain chemistry among much of the cast. The end result of that chemistry is an easily suspended disbelief among audiences. The ability of the show’s cast to make suspension of disbelief easy for audiences couples with the series’ animation and writing to make even clearer why any family not yet familiar with Geronimo Stilton will want to check out this DVD.