StarVista Entertainment and Time Life Entertainment will release another new set of episodes from the beloved Carol Burnett Show next month.

The Carol Burnett Show: Together Again will be released Tuesday, February 24th on DVD. The single-disc release will boast three more episodes from the classic variety/sketch comedy series. All three episodes are presented exactly as their aired in their original broadcasts on CBS in 1973 and 1978. This means that all three episodes will be completely uncut. The included episodes in question are Episode #705 (Original airdate: September 29, 2973), Episode #712 (Original Airdate: December 15, 1973), and Episode #1115 (Original Airdate: January 8, 1978). The episodes included in the upcoming DVD feature some of the greatest names from television’s golden era. Those stars include: Roddy McDowell (Cleopatra, Planet of the Apes Series, Fright Night), Ruth Buzzi (Laugh-In, The Dean Martin Celebrity Roasts), Gloria Swanson (Sunset Boulevard, The Gloria Swanson Hour), Richard Crenna (Judging Amy, JAG, Rambo series), and Ken Berry (Mama’s Family, F Troop, The Andy Griffith Show).

The Carol Burnett Show: Together Again will be available in stores and online Tuesday, February 24th. It will retail for MSRP of $12.95. It can be ordered online via Amazon at http://www.amazon.com/Carol-Burnett-Show-Together-Again/dp/B00NUSWZ9I/ref=sr_1_1?s=movies-tv&ie=UTF8&qid=1421421317&sr=1-1&keywords=The+Carol+Burnett+Show+Together+Again. More information on this and other releases from StarVista Entertainment and Time Life Entertainment is available online at: 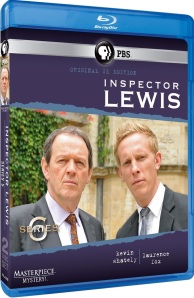 It looks like the end is here for Detective Inspector Robert “Robbie” Lewis and his partner Detective Sergeant James Hathaway….or is it?  If the final scenes of the third and final episode of Inspector Lewis: Series Six are any indication, it would seem that this show that debuted just over seven years ago has come to an end.  Though, the rumor mill is buzzing that this may not be the last that audiences see of Inspector Lewis after all.  If it is in fact the end for the fan favorite pair of detectives, Series Six is a fine send-off for this hit show.

Series Six is a fine send off for Inspector Lewis and his partner in these supposed final episodes.  The show’s writers have crafted a trio of stories that are some of the finest that audiences have seen over the course of its seven-year run.  This series takes Detective Inspector Lewis and his partner into the world of parapsychology in its opening episode, and then onto the very twisted trail of a drug smuggler before investigating the death of a man that was killed by someone with his own car shortly after being released from jail.  The murder victim had himself been jailed for accidentally killing another person in a wreck.  The three stories together offer just enough mystery to keep audiences fully engaged throughout this series’ four-plus hours.  The most deeply engaging of the episodes included in this new set is the series’ second episode, “The Ramblin’ Boy.”  This episode is a long, in-depth episode that starts with an unidentified body being found in a ditch.  Through all of its twists and turns, it eventually leads to a plot by an associate of Lewis who is running a complex drug smuggling scheme.  The story gets deeper and deeper as it progresses.  But it’s not so deep that audiences will get lost in everything.  Those audiences that allow themselves to be fully engaged in this episode will thrill in the way that the writers tie everything together.  Those audiences that do so will see that this is just one example of how rich the writing in this series is.

The writing in “The Ramblin’ Boy” is just one example of what makes Inspector Lewis: Series Six so enjoyable.  Audiences will be just as impressed as Inspector Lewis and Detective Sergeant Hathaway investigate the death of a man who claimed himself a clairvoyant.  The pair is drawn into the world of the paranormal after two people are killed by a mysterious individual, and a third person’s life is at risk.  The writing in this episode is just as solid as the series’ second episode.  Again, it offers just enough twists and turns to keep viewers engaged through the entire ninety minutes.  It’s not all that will keep viewers watching whether in this episode or either of the other two.  Audiences also have expert acting on the part of Kevin Whatley and Laurence Fox.

The scripts of the episodes on Series Six are just as expert as any of those in previous installments of this hit itv/PBS crime drama.  Solid scripts do plenty for any show.  But they can only go so far without proper acting on the part of the cast.  Thankfully for audiences, the acting on the part of Kevin Whately and Laurence Fox far exceeds expectations.  Having played their roles as long as they have (Whately has played Lewis since the late 1980s in the former series, Inspector Morse) the pair has learned each other.  Because of this, they gel better than ever on screen.  One wonderful example of this is seeing Lewis’ slight insecurities at working with someone other than Hathaway. “The Ramblin’ Boy” shows a rare side of Lewis when his partner goes on vacation, and he is forced to work with someone else temporarily.  It shows just how comfortable Lewis had become having one partner and how truly vulnerable he is.  It’s little intricacies such as this that makes this allegedly final series so wonderful.  Audiences finally see Lewis’ romance with Dr. Hobson (Clare Holman) revealed once and for all.  The reaction on the part of Chief Superintendent Jean Innocent (Rebecca Front) is classic.  It will leave any viewer, new or not, laughing.  His embrace with Hobson is another one of those moments that shows a more human side of Lewis.  Those moments really make Lewis so much more believable.  And they exemplify once more Whatley’s skill in front of the camera.  It’s just one more factor that makes this allegedly final series so enjoyable.  Though, there is one more factor that makes this final series so much better than any American crime drama.  That factor is something most audiences don’t take into account.  It’s the show’s costume department.

American crime dramas are a dime a dozen.  Just as common as the mass of crime procedurals on American television is their overt objectification of both male and female characters alike.  The exact opposite is the case with both Series Six of Inspector Lewis and its previous series.  The characters in this long-running series aren’t exactly “the beautiful people.”  That’s probably a big part of the reason that it isn’t largely popular among young American audiences.  The lack of overt sexuality in this latest series (and every series before) is one of the most subtle but important factors in the series’ success.  It forces the writers to write a compelling story, rather than rely on sexuality to drive it. It’s such a welcome change.  And along with everything else already noted, it makes this series one a wonderful jumping on point for new viewers, and equally wonderful for those who have seen this show through from its beginning.  Inspector Lewis: Series Six is available now on DVD and Blu-ray.  It can be ordered online direct from the PBS online store at http://www.shoppbs.org.