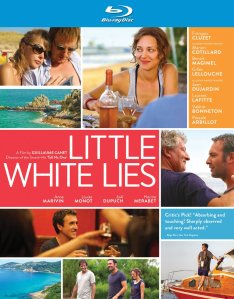 Little White Lies is a very emotionally powerful and moving story.  As powerful as it is, it is not a movie for anyone.  The reason for this is that it is a direct reflection of life.  Just because it is a French film doesn’t mean that the characters only reflect the French.  Rather, it reflects humans in general.  Whereas the BBC’s Keeping Up Appearances does this in a full on comical nature, this roughly two and a half-hour long allegory about the lies that we tell ourselves and others every day takes a far more dramatic turn on this subject.

Little White Lies was marketed as a dramedy of sorts.  And while there are some humorous moments, the humor of those moments is slight at best.  So it would be safer to consider this movie as leaning more in the direction of a drama than a dramedy.  The movie’s drama rises from the central theme that the group of friends have to put their annual vacation plans on hold when Ludo (Jean DuJardin—The Artist) is hit by a box truck while leaving a bar one day.  The drama starts right from the moment the group of friends leaves Ludo’s room at the hospital, their actions speak volumes.  They all agree to cut their annual vacation short by two weeks so as to be able to see Ludo, thinking that he will be okay.  The way that they act is almost that of people who feel inconvenienced by Ludo being in the hospital.  It is so subtle.  But it is there.  So it’s evident from early on just how much this story reflects real life.

The reflection of life doesn’t end with the moment the friends leave the hospital.  Throughout the time that the friends are together on their vacation, the lives that they live and that they use to impress one another are revealed.  From an unhappy couple to a gay man that is in the closet to lies about their own situation in life, each member of the group mirrors people in everyday life.  This ugly truth is eventually revealed in the story’s bittersweet ending.  The story’s end is its most powerful moment, too.  It leaves viewers to question what is really important in life.  Is it one’s own reputation or one’s own family and friends that are the most important?  Given, it is a foreign film.  But the message is one that will resonate among all audiences.  And because of that, it is worth at least one watch as emotionally charged as it is.

1.  The Artist:  While it originally made its debut overseas in 2011, it wasn’t until January 20th of this year that The Artist actually made its nationwide debut in theaters across the U.S.  Before then, only the lucky few at the big festivals got to see it.  That being the case, it should be considered a 2012 release.  So what makes it 2012’s best?  So much could be said.  At a time when so much of what Hollywood churns out is prequels, sequels, and remakes, this story—distributed by Sony Pictures—went the total opposite.  How simple and ingenious is it to make a silent film in a movie of major flash-bang-boom films?  Because the movie’s only sound is its music, viewers are forced to watch.  And the cast was force to really put on its best possible performance, rather than rely on everything else that most movies use to distract audiences from poor performances.  The music is quite enjoyable, too.  And of course, the general cinematography is just as impressive.  It all combines to make for a movie that any movie lover should see at least once.

2.  Mirror, Mirror:  Some of you might shake your heads at this pick.  But the reality is that this is really a fun and family friendly movie.  Both boys and girls will enjoy it as will parents.  While young Lily Collins (the daughter of superstar Phil Collins) is billed as the lead star here, it’s the dwarves who are really the story’s stars.  Their antics make for more than their share of laughs.  Though watching Prince Alcott (Armie Hammer—The Lone Ranger) put under the evil queen’s puppy love spell is pretty funny, too.  It’s obvious that this spoof of the classic fairy tale was aimed both at boys and girls.  With its mix of wit and charm, it will always be one of the best takes on the old Snow White story.

3.  The Odd Life of Timothy Green:  This is another truly enjoyable family movie.  The general story is one to which any parent can relate and will enjoy because of that.  Though the concept of what happens with Timothy might be a little bit tough to discuss with younger viewers.  The beautiful backdrop adds even more warmth to the story.  And the cast’s acting makes suspension of disbelief so easy.  Sure it’s sappy, emotional, and all that jazz.  But that can be forgiven as it’s such an original and heartwarming story.

4.  Skyfall:  This is where things begin to get a little bit touchy.  Skyfall is by far the best Bond flick to come along in a very long time.  That’s not to say that the previous two were bad.  But this one brought back memories of the old school James Bond that everybody knows.  It’s got the gadgets and the humor and none of the melodrama that weighed down the previous two Bond flicks.  The only downside to the movie is that it tends to drag in the final act.  Other than that, it is a nice return to form for the Bond franchise and gives hope for any future Bond films….that is at least if Christopher Nolan doesn’t get his hands on the franchise.

5.  The Avengers:  The Avengers was a very nice way to cap off the build-up created by Marvel Studios with the recent bevy of comic book based movies.  It had great special effects.  Its story was simple and solid.  And the shooting was equally impressive.  Considering all the action going on, audiences weren’t left feeling dizzy to the point of wanting to walk out (or in the case of home release, just turn it off).  But like so many ensemble cast movies, it suffered from a common problem.  That problem was the movie’s run time.  Most of the characters in The Avengers had already been introduced through their own separate movies.  So there was no reason to re-introduce them all over again this time.  A lot of that extra time could have been spared.  Hopefully those involved have learned from that and will present viewers with a shorter movie in the second of the Avengers movies.

6.  The Dark Knight Rises:  I am just as much a comic book fan as anyone else out there.  So it goes without saying that I was excited to see this movie.  It did a good job of wrapping up the trilogy.  The problem is that it did too much of a good job, as David Goyer and the Nolans tried too hard to cram everything into one movie.  Word is that this latest installment of the Batman franchise left many people checking their watches when it was in theaters.  It might have been better served to have been split up into at least one more movie because of everything added into the mix.  And having what seems to be a lack of commentary on the new home release, fans can only guess what the logic was in cramming so much into one story.  Much like The Avengers, the shooting and the special effects were great.  So it has that going for it.  But the writing was the story’s big problem.  Here’s to hoping that whoever takes over the Batman franchise next (whenever it’s re-launched) won’t make the same mistake as Christopher Nolan and company.

7.  Prometheus:  This semi-prequel to Ridley Scott’s hit Alien franchise was met with mixed reviews.  There seemed to be no gray area here.  Audiences either loved it or hated it.  Truth be told, it worked quite well as both a prequel and as its very own stand-alone movie.  Sure the special effects are different from those used in the original movies.  But times are different.  So viewers should take that into account.  And the shooting was just as impressive.  While it may not be as memorable as Scott’s previous works, at least audiences can agree that it’s better than the movies in the AvP franchise.

8.  Les Miserables:  This latest reboot of Victor Hugo’s classic story of love and redemption in one of history’s darkest eras is not bad.  But it’s not great, either.  Audiences who know the stage play will thrill at how director Tom Hooper (The King’s Speech) and his staff of writers paid tribute to the stage play both in its writing and its shooting.  At the same time, Hooper tried so hard to pay tribute with his shooting style and the transitions that the whole movie felt dizzying to say the least.  The shooting and transitions felt like nothing more than a bunch of cuts from one shot to the next.  There was never a total sense of fluidity anywhere in the story.  It was almost as if despite staying true to the stage play, the script for this latest big screen adaptation was written by someone with ADHD.  Hugh Jackman and Anne Hathaway did a superior job with their performances.  But despite that, odds are that the movie will sadly be remembered more for its flawed shooting and transitions than for its award-worthy performances.  Nonetheless, it’s still a good movie for any fan of Les Miserables or for fans of musicals in general to see at least once.

9.  Salmon Fishing in the Yemen:  Salmon Fishing in the Yemen is without a doubt an original story.  It’s next to impossible to find anything like it out there or present.  But it suffers greatly from an identity crisis.  It doesn’t know whether it wants to be a drama, a romance, or a little bit of both.  It’s nice to see the simple message of something as simple as fishing being able to bring the world’s people together peacefully.  But it really seemed to let the romance factor get too much involved.  As a result, it got bogged down in itself.  Had it not had the romance subplot, it might have been better.

10. Arbitrage:  It was once noted that three factors more than any other are the causes of crime.  Those factors are:  money, power, and sex.  Arbitrage has all three of these.  It’s an interesting movie.  And it definitely wastes no time noting the latter of the trio of factors, as it lets audiences know that Robert Miller (Richard Gere) is having an affair with another woman.  And also, Miller’s boss has a very firm talk with him early on letting him know that he knows about the financial inaccuracies that he’s causing.  It doesn’t take long to know where this story goes.  It’s something of a tried and true story.  Add in this critic’s pet peeve of movies, the “whisper scenes” and it makes for a movie that as good as it is it could have been better.  For those wondering, the “whisper scene” is exactly as it sounds (bad pun there).  The “whisper scene” is one in which actors essentially whisper throughout the scene against overpowering music to make the scene more emotional and powerful.  But put against the sudden transition to normal volume scenes (and above normal volume scenes), it becomes rather annoying as one has to constantly change the volume on one’s TV as a result of that.  It’ll be interesting to see if it gets the Golden Globe for which it was nominated.