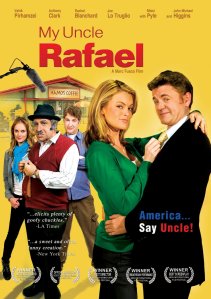 My Uncle Rafael is the best new independent movie of 2014.  And it is arguably one of the best new movies of the year, too.  Originally released in 2012, its release this week on DVD marks the first time that it has seen the light of day in home release format.  And while it obviously owes a certain amount of its success to Robin Williams’ 1993 hit movie Mrs. Doubtfire, it still manages to stand strong on its own merits as a movie that is at least somewhat original in its presentation.  That is the central point of the movie’s success.  It has all the heart and wit of Mrs. Doubtfire without Robin Williams’ cross-dressing and manic character portrayal.  And while it does maintain at least some similarity in its approach to the family-fixing plotline, it approaches the issue through a multi-cultural avenue rather than that of a desperate father. Sign of the times, it would seem.  Just as important to the movie’s enjoyment is the acting on the part of the movie’s cast.  It would have been so simple for the cast, which is relatively well-known and experienced to treat the movie like the independent movie that it is.  But each member of the cast approached this work with the same seriousness used in its other performances.  The professional approach taken by the cast of My Uncle Rafael adds so much enjoyment to the movie.  It adds so much especially considering the quality of the movie’s production values.  While released via an independent studio—TNP Films—the movie’s production values are just as quality as anything released by any of Hollywood’s “Power 5” studios.  That actor, along with the work of the cast and of the movie’s writers, makes My Uncle Rafael a complete joy for audiences of almost any age.  Again, it isn’t the first time that the story presented here has been utilized for a movie.  But its execution makes it a move well worth the watch.

The story that is presented in My Uncle Rafael is not the first of its kind.  It is the story of an outsider coming into a family’s home and fixing said family.  It has been used numerous times in the past.  In 1993, it was presented in the hit movie Mrs. Doubtfire. Two years prior, it was used in pro-wrestling legend Terry “Hulk” Hogan’s family comedy Suburban Commando.  And to a lesser extent it was also used in Vin Diesel’s 2005 flash-in-the-pan flick The Pacifier.  It could even be argued that a similar formula was used way back in the 1989 John Candy dramedy Uncle Buck.  Considering all of this, it leaves one wondering how many other ways in which the “family fix” formula could be used without it being stale and unoriginal.  Enter My Uncle Rafael.  My Uncle Rafael (not to be confused with Joe Pesci’s 1992 dramedy My Cousin Vinny—yes that bad pun was intended) takes the classic “family fix” formula and updates it by incorporating a multi-cultural theme into the story.  Most interesting here is the fact that the duo used an elderly Middle Eastern man as the movie’s central figure.  This was really interesting especially considering the tensions between Americans and those of Middle Eastern descent currently living in the United States.  It’s an angle that few if any writers would even begin to attempt.  For that alone, Pirhamzei and Yagemann are deserving of a certain amount of credit.  That the duo didn’t try to make a direct light of Rafael’s nationality as a soap box makes the script even more worthy of applause.  Omitting that from the script makes the rest of the story far more enjoyable and in turn more memorable.

The script behind My Uncle Rafael is not the first of its kind.  That goes without saying.  But there are aspects of the script that make it surprisingly enjoyable.  As enjoyable as the movie’s script proves to be in the long run, it would be nothing without the abilities of the movie’s cast.  John Michael Higgins (Yes Man, Happily Divorced, Bad Teacher) brings plenty of experience to the movie as do Missi Pyle (The Artist, Charlie and the Chocolate Factory, Gone Girl), Anthony Clark (Yes, Dear, Boston Common, Soul Man), Joe Lo Truglio (Role Models, Wreck-It-Ralph, Pineapple Express), Carly Chaikin (Suburgatory, The Last Song, In A World…), and Rachel Blanchard (Clueless—TV Series, 7th Heaven, Are You Afraid of the Dark).  The competition between Higgins’ Damon and Clark’s Jack makes for plenty of laughs.  It is a competition much like that seen in Mrs. Doubtfire.  Missi Pyle is just as entertaining as she becomes caught up in the movie’s central love triangle all while trying to maintain her place as mother to her children.  But it is really Vahik Pirhamzei’s portrayal of the loveable Uncle Rafael that really shines.  Pirhamzei’s portrayal gives Uncle Rafael so much heart and warmth.  He makes Rafael loveable not only to his fellow characters but to audiences, too.  One can’t help but agree in watching Rafael that maybe the uncle really is at the center of everything.  Only audiences that watch the movie or have watched it will get that reference.  In hindsight, Rafael’s portrayal makes that line make perfect sense.  That isn’t to take away from Pirhamzei’s cast mates by any means.  Both the more well-known actors and the lesser known cast members add their own enjoyment to the story in whole, too.  But it is his portrayal that holds everything together and makes each of his cast mates’ portrayals all the more entertaining with the end result of the cast in general doing its own part to show once again why My Uncle Rafael  is this year’s best new independent movie and one of the year’s best movies overall.

The writing that went into My Uncle Rafael and the acting on the part of the movie’s cast both play their own important part in the overall success of this surprisingly entertaining story.  Rounding out the presentation is its production values.  Being that this movie is independent, one would think that it would not have the production values of its bigger name family friendly counterparts that have come before.  But the reality is that its production values are quite high.  That includes the movie’s cinematography, its backdrops, costumes, and all other elements that went into bringing the movie to life.  Having such quality production values, it makes sense that the largely veteran cast would want its portrayals to be just as high quality.  The combination of that high quality acting and equally high quality production values adds to the ability of audiences to suspend their disbelief and in turn allow themselves to be immersed into the story and thus offer it the chance that it quite well deserves.  In giving it the chance that it deserves, audiences will agree that this movie is just as enjoyable as its more well-known predecessors and that it is one of this year’s best new movies as well as the year’s best new independent movie.