Legendary British rock band The Who is currently making its way across America on the North American leg of its new “The Who Hits 50! Worldwide Tour.” The tour is in support of its latest hits collection, which goes by the same name. That compilation was released late last year. Now as The Who makes its way across America (and later Europe and other nations), Eagle Rock has announced that it will release a new, archived live recording from The Who this summer for all of the band’s fans.

Eagle Rock Entertainment will release The Who Live at Shea Stadium 1982 on Tuesday, June 30th. The concert will be available on DVD, SD Blu-ray and digital formats. It was originally recorded on October 13th, 1982 at Shea Stadium. It was the second of the band’s concerts recorded during its two-night stand at Shea Stadium and featured the lineup of Roger Daltry, Pete Townshend, John Entwhistle, and Kenney Jones. The tour from which this concert was pulled–its 1982 North American Tour–was the last on which Jones would sit behind the kit for the band. Once the tour ended, The Who would not tour again until 1989. The show’s set list includes some of its biggest hits at the time including: ‘Pinball Wizard,’ ‘We Won’t Get Fooled Again,’ ‘My Generation,’ ‘Substitute,’ ‘Who Are You,’ ‘I Can’t Explain,’ ‘See Me Feel Me,’ ‘Baba O’Riley,’ and a number of others. The concert’s complete set list is noted below:

11) The Punk And The Godfather

23) I Saw Her Standing There

Audiences can get a glimpse of the concert now by clicking on the picture below. It will take fans to YouTube where audiences will get to see the band’s performance of ‘Love Reign O’er Me’ from the concert. 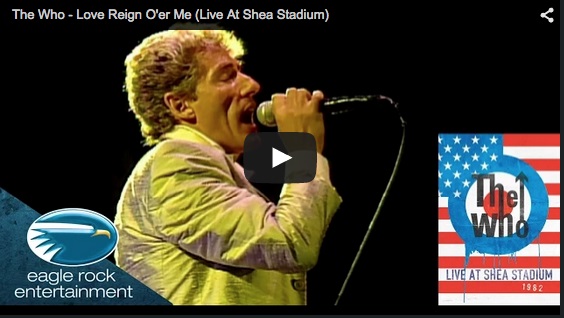