Clutch announced a string of new live dates this week.

The band announced Tuesday, it will headline a mini-Winter tour in December. The tour is scheduled to run from Dec. 37-31.Stoner (featuring Kyuss’ Brant Bjork and Nick Oliveri. Oliveri is also a member of Queens of the Stone Age) as support.

Tickets go on sale at 10 a.m. ET Friday. The tour’s dates are noted below.

The band said in a prepared statement that it is looking forward to getting back on the road.

“We are incredibly excited to hit the road again” the statement reads. “We’ve missed the shows, the fans, the venues and the opportunity to watch the other bands we share the stage with. It’s going to feel like our first show all over again and we can’t wait! Come out and let’s make some Rock and Roll!.”

More information on Clutch’s upcoming live dates is available online along with all of the band’s latest news and more at: 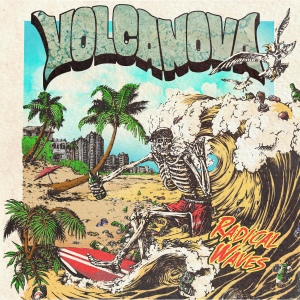 The world of stoner rock has produced a variety if notable names throughout its history.  From the likes of Clutch, Queens of the Stone Age, and Fu Manchu, to Fireball Ministry, Kyuss, The Sword and more, stoner rock fans have a lot of bands from which to choose as their favorite(s).  Fans of the genre added another option to that list Friday with the release of Volcanova’s debut album Radical Waves.  The 10-song record will appeal to any fan of the genre in part because of its musical arrangements.  They will be addressed shortly.  The album’s lyrical content works with its musical arrangements to add even more appeal for audiences.  It will be addressed a little later.  The record’s production rounds out is most important elements and will also be addressed later.  Each item noted here does its own key part for the whole of Radical Waves.  All things considered, they make the album a work that stoner rock fans will find radical in itself.

Fledgling stoner rock band Volcanova’s debut album Radical Waves is a good start for the group.  It is a work that will appeal to a wide range of the genre’s fans.  That is due in part to its musical arrangements.  From start to the end of the 42-minute record, the guitar-driven arrangements display all of the trademarks of the stoner rock genre.  The fuzz effect is there in the guitars as is the nuanced effect of the drums, with their heavy, thundering approach and the equally heavy low-end from the bass alongside the gritty, semi-screaming vocals.  That is not all that is exhibited throughout the record’s arrangements.  The noted instrumentation and styles also boasts a clear doom rock influence a la Black Sabbath.  ‘M.O.O.D.,’ which comes late in the album’s run, is one of the most notable of those arrangements that couples the doom and stoner influences.  One could go so far as to argue that the combination of the elements with this heavy, plodding composition is comparable to works from Crowbar.  Front man Samuel Asgeirsson’s vocal delivery couples with the noted heavy, fuzzed guitars, drummer Dagur Atlason’s time keeping and bassist Pornsteinn Arnason’s low-end to make the song’s arrangement a rich, heavy composition.  Asgeirsson’s vocal delivery style is very much like that of Crowbar front man Kirk Windstein and Fireball Minsitry front man James A. Rota.  His stylistic approach on guitar is instantly comparable to works from Queens of the Stone Age, Fireball Ministry, and Kyuss.  Much the same can be said of the drumming style from Atlason.

‘I’m Off’ is another notable of the album’s most notable arrangements.  Where ‘M.O.O.D.’ exhibits doom and stoner influences, ‘I’m Off’ is more of a pure stoner rock composition.  Its driving, fuzzed guitar approach, heavy low-end and drumming is immediately likened to works from Queens of the Stone Age in its own right.  Asgeirsson’s vocal delivery here continues to show that Kirk Windstein type approach.  The end result is a presentation that again will appeal to a wide range of stoner rock fans in its own right.

‘Sushi Sam’ is another way in which the album’s musical arrangements prove their value to its presentation.  Yes, the stoner rock sound that is so evident throughout the album is just as evident here as anywhere else on the record.  What is most important to note here is that while the stoner rock influence is as clear as ever here, the stylistic approach in this work is more of a classic rock vibe than something modern.  The use of the cowbell, the guitar solo and general arrangement gives the song that throwback vibe. There is also something in the song’s production that adds to that sense, considering the sound of the drums and guitars.  This will be addressed later.  Keeping in mind the arrangement here, that of the other songs noted and those of the rest of the album’s songs, the arrangement in whole leave little doubt as to their importance.  They collectively give audiences plenty to appreciate.  The arrangements are but one part of what makes Radical Waves a presentation that stoner rock fans will find worth hearing.  The album’s lyrical content presents its own interest.

The lyrical content featured throughout the course of Radical Waves’ nearly 43-minute run is varied in its own right.  ‘I’m Off’ is one of the most interesting of the song’s lyrical presentations.  Considering what is decipherable without a lyrics sheet to reference, the song comes across as a work that just celebrates having a good time.  Asgeirson leaves little doubt as to that as he sings in the song’s chorus, “We’re gonna get f*****’ wasted tonight.”  He additionally states, “bring a six-pack/Light a cigarette/We’re gonna get f*****’ wasted tonight.”  This critic does not advocate drug and alcohol use of any kind, as a reminder.  That aside, what the band infers overall between this note and the rest of the song’s lyrical content is that noted theme of enjoying life and making the most of a situation.  It is a celebration of sorts, which would explain the high energy in the song’s musical arrangement.  To that end, it will connect with audiences, ensuring their entertainment and engagement in its own right.  It is just one way in which the album’s lyrical content proves important.  ‘Super Duper Van’ is another key addition to the album in regards to its lyrical content.

‘Super Duper Van’ is a full on psychedelic stoner rock song.  While much of the song’s lyics are indecipherable sans lyrics, just enough is understandable that the noted content is clear.  There is a mention here of “eating a mushroom” (I.E. drug use), and “taking a never-ending ride in outer space.”  There is also mention in this song of putting the pedal to the metal and going on a ride across the desert sands.  The song’s companion video adds to the psychedelia with the band going on a ride in a car that they imagine is a van, which apparently goes into outer space after the pair goes on a trip from drinking some kind of liquid.  The group even goes so far as to even eat some moon cheese during the seemingly drug-induced trip.  Simply put, it can be inferred from the video and what lyrics can be understood, that this song is apparently an old school stoner rock work in every sense of the word. It will appeal to the noted listeners, too.   To that end, it shows even more why this album will appeal to its target audience, and is just one more way in which it does so.  ‘M.O.O.D.’ is yet another was in which the album’s lyrical content proves worth examining.

‘M.O.O.D.’ comes across as being a work about people who are not all that they seem.  This is inferred as Asgeirsson sings about the person being “covered in shame and lies/Behind your perfect wall.”  He adds what sounds like, “It’s not at all so sweet.”  The rest of the song’s lyrical content that follows is similar in style, difficult as it is to decipher.  Enough is just barely able to be understood that it helps to further illustrate the noted message.  To that end, the song will connect with listeners in its own way, too.  Between this song’s lyrical content, that of the other examined songs and of the rest of the album’s songs, the whole of that content proves to offer its own share of engagement and entertainment for audiences.  It still is not the last of the album’s most notable elements.  The record’s production rounds out its most important elements.

The production of Radical Waves is an interesting aspect.  That is because it is both good and bad.  It is good in that considering how much is going on throughout each song, it is clear painstaking efforts were taken to balance everything.  For the most part, the instrumentation was handled well through the production.  None of the instruments overpowers the other at any point.  On the other hand, the vocals many times sounded washed out and airy.  Asgeirsson’s vocals are difficult to understand at time as a result of this approach.  It sounds like in many cases, that airy effect was intentional.  And if in fact that was the case, it was a bad effect to use.  At other times, it feels like the vocals just blend in too much with the instrumentation.  Now all of this is not to say that the production is a loss.  Again, the balance of the guitars, bass and drums works relatively well here.  It is just that one aspect of the vocals and how they are joined with the instruments.  All of this in mind, it makes the album’s production at least somewhat of a positive to the album’s presentation.  When this is considered along with the album’s overall content, it all comes together to make the album a presentation that stoner rock fans will agree is worth hearing at least once.

Volcanova’s debut album Radical Waves is a positive start for the up-and-coming band.  It is a presentation that stoner rock fans will find worth hearing at least once.  That is due in part to its musical arrangements.  The arrangements exhibit more than just a stoner rock sound and style.  They also display doom rock influences to varying degrees throughout the album.  The album’s lyrical content will generate its own interest among listeners.  The record’s production adds to its interest even being slightly flawed.  Each item noted here is important in its own way to the whole of this album.  All things considered they make Radical Waves a musical wave that stoner rock fans will enjoy riding at least once.  Radical Waves is available now through The Sign Records.  More information on the album is available along with all of the band’s latest news at http://www.facebook.com/volcanova.