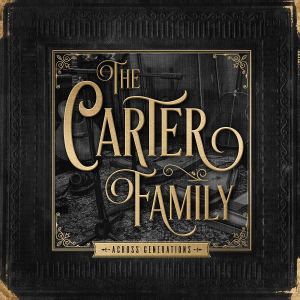 Country music purists received a very special new treat this week courtesy of Reviver Legacy, LLC.  The Carter Family: Across Generations was released Friday.  The 13-song record features songs recorded by one of the first families of country music from across five generations of that family.  Those songs are themselves the most important part of the compilation and will certainly leave listeners smiling.  The compilation’s companion booklet adds its own share of enjoyment to the recording and will be discussed a little later.  The collective mixing and production rounds out the recording’s most important elements.  When it is considered along with the collection’s featured songs and the liner notes, the whole of these elements makes The Carter Family: Across Generations a production that will be enjoyed by many more generations of country music fans.

Reviver Legacy, LLC’s new country music compilation The Carter Family: Across Generations is a presentation that country music purists will love.  That is due in part to the recording’s featured songs.  The 13 song that make up the body of the 41-minute collection feature songs recorded by all five generations of the Carter family, including but not limited to John Carter Cash, Roseanne Cash and “The Carter Girls,” Helen, June and Anita.  What stands out is that the original recordings have brought together the Carter family members who sang the original songs and members of the current generation of Carters for many of the featured works.  The collection actually opens with one of those multi-generational works in the form of ‘Farther On.’  The simple, acoustic piece features Sara carter, Dale Jett and Adrianna Cross – members of the Carter family’s first, third and fifth generations – coming together with John Carter Cash – third generation Carter family member who also produced the compilation – and other members of the Carter/Cash family for a beautiful start to the compilation.  The far more upbeat ‘Foggy Mountain Top’ brings together third generation Carter family members Carlene Carter and Danny Carter Jones and second generation members Helen Carter and Anita Carter for the almost southern gospel style work, which is another of the compilation’s most moving numbers.  ‘Will The Circle Be Unbroken’ features members from almost all of the Carter family’s now five generations, and is yet another of the most moving of the compilation’s numbers thanks to the simplicity of the harmonies and the guitar.  The mention of the family standing together and no one standing alone because of that is one of the song’s most powerful moments, though the full compliments of vocals creates a certain choral feel that can only be understand by hearing it for one’s own self.  It is just one more example of how the joining of the Carter family’s members from *ahem* across generations creates so much power in these simple arrangements.  Considering these noted songs and the rest of the recording’s featured songs, the whole creates a record whose song selections alone create a fully solid foundation for its presentation.  The liner notes featured in the recording’s companion booklet firm up that foundation even more.

The liner notes for this collection were crafted by John Carter Cash, who also produced the presentation.  The notes are so important to discuss because of the background that they provide on the songs and on the recording in whole.  Cash, who is the son of the late great Johnny Cash and June Carter Cash writes in the booklet’s liner notes, that the original Carter family got its start performing on a radio broadcast from Mexico, of all places.  He notes that the station’s signal reached 500,000 watts, which means it had a very wide reach.  As a matter of fact, he notes that the station’s power enabled it to reach as far as Boston and San Diego.  In other words, the Carter family had a very large audience, needless to say.  He adds that many who listened to those broadcasts were already great names in their own rights – performers, such as B.B. King, Hank Williams and Chuck Berry.  That is a wide range of talent and famous names to say the very least.  It also speaks to the group’s popularity.  Carter Cash additionally discusses in the liner notes, how he found the recordings of ‘Maybelle’s New Song’ and ‘Farther’ purely by chance.  It is a good thing that he did find those recordings.  There are even discussions on the unfinished tunes that were finished through many of the recording’s featured works.  All things considered here, the liner notes featured with this compilation offers listeners just as much engagement and entertainment as the songs themselves, and proves just as valuable to the whole of the presentation.  It still is not the last of the recording’s most important elements.  Its collective production and mixing puts the finishing touch to its presentation.

The production and mixing that went into this recording paid off in full.  The complimenting of the unfinished songs with the new vocals and instrumentals is seamless.  The same can be said of the completed songs and their new accompaniments.  What’s more, the transfer from the master tapes to the finished product here was done without a single bit of loss in the process.  That means the static from the original songs is still there, and there is little to no need to adjust the volume at any point, too.  That is a credit to the time and painstaking effort that was clearly taken to make this final product a reality.  The vocals and instrumentals, both new and old alike are expertly balanced in each song, adding to that lack of need to adjust the volume or even balance on the radio (for those who, like this critic, still listen to CDs in the car).  Simply put, everything that could be done right was done right here.  Carter Cash and everyone else behind the boards and glass are to be commended for their work.  The end result is a beautiful, moving tribute to one of country music’s most well-known and respected families.

Reviver Legacy, LLC’s new compilation record The Carter Family is a wonderful tribute to one of the great families in the country music community.  That is due in no small part to the songs selected for the recording.  They take audiences deep into the history of the famed family and its music.  The liner notes crafted by Carter family member (and the compilation’s producer) John Carter Cash add even more engagement and entertainment to the recording’s presentation.  When these items are considered with the recording’s production and mixing, that work shows even more why the collection is so impressive.  When it is considered along with the songs and the liner notes, the whole of those elements makes the recording in whole a work that country music fans will enjoy for many generations to come.  More information on this and other recordings from Reviver Legacy, LLC is available online now at: The members of Judas Priest made a big announcement regarding one of its classic albums this week.

Judas Priest just released its seventeenth full-length album Redeemer of Souls this summer. Fresh on the heels of that album’s release, the band has announced that it will re-issue its hit 1984 album Defenders of the Faith early next year. Defenders of the Faith will be re-issued on March 10th, 2015. While Defenders of the Faith will be re-issued next spring, this year marks the 30th anniversary of the album’s original release. The album, the band’s ninth at the time of its original release, is anything but just another re-issue. The upcoming re-issue will include Judas Priest’s original album re-mastered by producer Tom Allom and a complete live performance spanning two discs. The triple-disc package will be released via Columbia/Legacy.

The bonus full-length concert included with the upcoming re-issue of Defenders of the Faith was recorded at the Long Beach Arena in Long Beach, California on May 5th, 1984. The performance was part of the band’s tour in support of the then new release. Its set list features a total of twenty-one songs spread across two discs. Among those twenty-one songs are classic hits such as: ‘Metal Gods,’ ‘Breaking The Law,’ ‘Sinner,’ ‘ Electric Eye,’ ‘The Green Manilishi (Wit the Two-Pronged Crown),’ ‘Victim of Changes,’ and ‘You’ve Got Another Thing Coming’ among lots of others.

CD1 ‘Defenders of the Faith’ Re-Mastered

More information on Defenders of the Faith’s upcoming re-issue and all of the latest news and tour updates from Judas Priest is available online at:

The world celebrated the seventieth anniversary of the birth of the iconic musician Jimmy Hendrix this past November.  While the anniversary has passed, Experience Hendrix, LLC continues to celebrate his legacy with more new releases this winter.  The company is set to release a new compilation of previously unreleased material in March titled, People, Hell and Angels.  In anticipation of the upcoming release, the single, ‘Somewhere’ is now available online at http://www.rollingstone.com.  The song is just one of the twelve tracks that comprise the new release.  It will also be available in a variety of formats beginning February 5th.  It will be available as a CD single available only at Wal-Mart.  It will also be available as a digital single and a special double-sided vinyl single available only at independent record stores nationwide.  The vinyl single will come with a bonus B-side that is a previously unreleased recording of ‘Power of Soul’ recorded by Band of Gypsys.  The CD single will come with a bonus live recording of ‘Foxey Lady’ recorded live at the Fillmore East in January 1970.  Both the vinyl and CD singles will be limited editions.

The upcoming album and limited edition singles are just part of the ongoing celebration of Hendrix’s birth and life.  Now, Experience Hendrix, LLC has made a new announcement about even more releases.  Along with the upcoming release of People, Hell and Angels, Experience Hendrix, LLC will also release a pair of Hendrix’s classic albums on 12” mono vinyl’s for true Hendrix aficionados.   The companion releases will be re-issues of his classic albums, Are You Experienced and Axis: Bold as Love.  Both albums will be struck on 200-gram audiophile vinyl.  Each one will be individually numbered and will include original artwork and sequencing.

The track listing for each vinyl is as follows:

Are You Experienced (U.S. Sequence and Artwork)

Are You Experienced (U.K. Sequence and Artwork)

For all of the latest news on the latest Hendrix releases and more, fans can go online to http://www.jimihendrix.com.