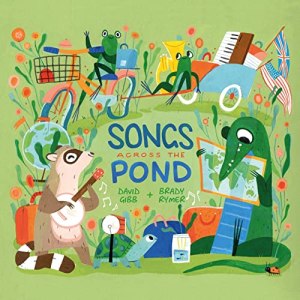 It’s amazing sometimes, what something as simple as a compliment can do.  Three years ago, David Gibb sent an email to Brady Rymer offering his compliments to Rymer for his body of work.  That chance email bearing a simple compliment was the catalyst for a friendship that since then, has gone on to produce a new album from each artist that features the other.  It also has led to the creation of a collaborative record from the duo that is scheduled for release Friday through Bumblin’ Bees/Little Seeds/SGO in the form of Songs Across The Pond.  The title comes from the fact that the friends live on either side of the Atlantic, one in the United States and the other in Great Britain.  The 12-song record is a work that is certain to appeal to listeners of all ages.  That is due in part to its featured musical arrangements, which will be addressed shortly.  The album’s accessible lyrical content adds to its appeal and will be discussed a little later.  Its sequencing rounds out its most important elements and will also be discussed later.  All three items noted here are key in their own way to the whole of this recording.  All things considered, they make Songs Across The Pond a work that families on both sides of the pond will enjoy.

David Gibb and Brady Rymer’s new collaboration album Songs Across the Pond is a successful offering from the duo.  That is due in part to the record’s musical arrangements.  The arrangements give audiences plenty to appreciate in themselves.  This is proven right from the album’s outset in its title track/opener.  The keyboard, guitars and vocal delivery join with the horns, bass and choral lines to create a blues-infused song composition that lends itself to comparison to works from the likes of Susan Tedeschi.  ‘Two Towns,’ the albums second song, meanwhile presents a distinct 80s-infused sound in its arrangement.  That is made clear through the combined vocal delivery style, piano line and guitars.  As the album makes its way into its third song, ‘Hey There,’ one can easily make a comparison between this song’s arrangement to works from say Gin Blossoms and – to a lesser extent – Wilson Phillips.  It is very much a 90s pop sort of sensibility.  Things change even more in the album’s fourth song, ‘Living in a Beatles Song.’  This song is arguably the album’s best song both because of its musical arrangement and its lyrical content.  The song’s musical arrangement itself is a direct tribute to the music of The Beatles, complete with the harmonica line from the band’s timeless song ‘Love Me Do.’  Gibb and Brady keep things quite interesting as they move into ‘Summertime Soul.’  There is a distinct classic pop rock influence in this song.  At the same time though, there is also a bit of a modern indie-pop sensibility to the song.  The modern folk approach taken in ‘Travelling David’ – the album’s midpoint – changes things up once more, keeping things interesting up to that point.  Listeners’ engagement and entertainment continues from that point on to the album’s end, as the arrangements continue changing style throughout the second half of the record.  Keeping all of this in mind, the musical content featured throughout Songs Across The Pond forms a solid foundation for its presentation.  It will appeal just as much to adults as to children.  It is just one part of what makes this album a success.  The album’s lyrical content adds its own share of appeal to its presentation.

The lyrical content featured throughout Songs Across The Pond are crucial to its presentation because they are just as accessible to listeners of all ages as their musical counterparts.  Case in point is the lyrical content featured in ‘Living in a Beatles Song.’  The duo pays tribute to so many Beatles songs here, including but not limited to ‘A Hard Day’s Night,’ ‘Lucy in the Sky with Diamonds, ‘Yellow Submarine’ and ‘I Want To Hold Your Hand.’  Throughout the course of the three-minute-plus song, that lyrical tribute is in whole, its own full-length tribute to The Beatles and their influence.  Yes, there are bands out there who are more well known than Gibb and Rymer, who have also paid tribute to The Beatles, but few if any have done so in the fashion of this duo.  It truly is a unique presentation in its own right.  ‘Two Towns’ is another example of the importance of the album’s lyrical content.  On the surface, this song features Gibb and Rymer singing about the traditions of their own countries.  There is a note about Halloween and Christmas – apparently Father Christmas “comes down to the river on a boat full of presents and sweets in Great Britain according to this song.  Meanwhile on this side of the Atlantic, people dress up their pets on Halloween, and festivals that celebrate agriculture and even crown a Strawberry Queen.” On a deeper level, this song is a starting point for discussions about cultural diversity.  Whether that function was manifest or latent is anyone’s guess, but it is there nonetheless.  What’s more, that discussion is needed and welcome in homes and classrooms especially now more than ever.  It is just one more way in which the album’s lyrical content proves so critical to its presentation.  ‘Get Up With Me and Dance’ is yet another way in which the album’s lyrical content proves so important to its presentation.  This is another of those songs that serves a dual purpose.  On the surface, it is a song that promotes dancing.  On another level, it is a song that promotes and celebrates the joy that it can and does bring to a person.  It goes so far as to even note, “It’s amazing what a song can do/If you don’t’ believe me/Then I’ll prove it to you/’Cause when a song makes you shiver down into your bones/It gives you a feeling/A feeling like you’re home/It might make you laugh/Or it might make you cry/It doesn’t really matter/Just welcome it inside.”  Again, this is promoting joy and just letting one’s self let go and let all those emotions out.  This is a message that will appeal to listeners of all ages any time, not just now during the stressful times caused by everything happening in the world.  When this positive, uplifting content is considered along with the rest of the album’s lyrical content, that whole strengthens the album’s presentation even more, proving that much more why this record is such an appealing presentation.  Together with the album’s musical content, the overall content proves itself unquestionably crucial to the album’s presentation and more than enough reason for audiences to hear this record.  Even with all of this in mind, it still is not the last of the album’s most important elements.  Its sequencing rounds out its most important items.

The sequencing of Songs Across The Pond ensures listeners’ engagement and entertainment because it keeps the album’s energy stable throughout.  The 41-minute record’s bluesy, mid-tempo opener is a stable opener.  That energy stays relatively stable throughout.  That is the case even as the musical styles change from one song to the next.  The only time when the album pulls back is its finale, ‘Happy To Be Going Home.’  The song’s arrangement is a reserved composition that conjures thoughts of Bob Dylan and Don Mclean, but is still a happy work even with that reserved nature.  That ability to so expertly balance the album’s varied musical influences and energies says a lot about those responsible for the album’s sequencing.  The result is an album that keeps ensures even more, listeners’ maintained engagement and entertainment through that thought.  When this is considered along with the impact of the album’s content by itself, the whole of the album proves unquestionably that it deserves its own spot on any critic’s list of the year’s top new family music albums.

David Gibb and Brady Rymer’s new collaborative album Songs Across The Pond is a work that the whole family will appreciate.  That is proven in part through its musical arrangements, which find themselves accessible to listeners of all ages, taking listeners back to the golden age of folk and rock and even back to the 90s.  The album’s lyrical content is just as accessible to listeners of all ages as its musical content.  Sometimes the messages in the album’s lyrical content are simple.  At others, they are actually quite deep.  The album’s sequencing puts the finishing touch to its presentation.  Each noted item is key in its own way to the whole of the album.  All things considered, they make the album another welcome addition to this year’s field of new family music offerings.  It is scheduled for release Friday through Bumblin’ Bee/Little Seeds/SGO.

More information on the album is available along with David Gibb’s latest news at:

More information on the album is available along with Brady Rymer’s latest news at: