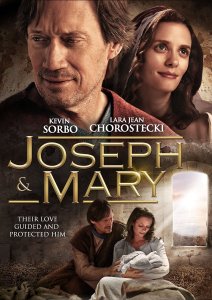 Earlier this month Cinedigm released its new biblically-based movie Joseph and Mary to retail and online outlets around the country.  The independent studio’s new offering is an interesting new presentation.  That is due in part to its story.  This will be discussed shortly.  While the story makes the movie worth at least one watch by Christian audiences, it is not a perfect presentation.  It does suffer from some casting issues that cannot be ignored.  That will be discussed later.  As much as the movie’s casting takes away from its presentation its production values make up at least somewhat for that one negative.  The combination of that positive couples with the movie’s central story to make the movie worth at least one watch even with its one glaring con.

Cinedigm’s new biblically based movie Joseph and Mary is an interesting new cinematic offering from the Los Angeles-based independent movie studio.  It is not the worst biblically based movie to ever be released, nor the best.  For all intents and purposes it is somewhere in the middle, a movie that for Christian viewers, is worth at least one viewing.  That is due in large part to the movie’s story.  One could argue that it is an in-between of sorts that connects The Greatest Story Ever Told and the many variants of The Nativity Story.  It tells the story of Jesus’ birth in the manger.  But it does more than that.  It also tells the story of Elijah, a rabbi who ends up caring for Aaron’s wife Rebekah after Aaron is killed by a tax collector.  The troubles don’t end for Elijah there.  Rebekah and Elijah end up losing not one but two sons as a result of orders by King Herod.  There should be a slight digression for a moment here.  Aaron’s murder and the scene involving the killing of the first-born sons are both very violent even for an independent movie.  So audiences should use their discretion in screening this movie.  There is also a somewhat intense scene in which Rebekah has to fight off the man who killed her children.  This scene could easily be considered a bit intense for some younger viewers, too.  More simply put the overall content presented within the movie’s story might not be suitable for all viewers.  Keeping this in mind, the movie is perhaps aimed less at younger viewers and more so at older audiences.  Now getting back on the subject at hand, all of the troubles faced by Elijah force him to make a very difficult choice.  That choice is between forgiving Herod and the others or exacting revenge.  Of course it is through Jesus’ own insight (even as a boy) that Elijah makes his ultimate decision.  It is obvious what that choice is.  Keeping this in mind, the central message of forgiveness that Jesus taught in the bible is just as prevalent here, too.  There is also an interesting addition to the story as it presents Josephs fate, which is not exactly a happy fate, either.  It is one more way in which the movie’s story stands out from so many other biblically based presentations.  To that end, Joseph and Mary, as misleading as its title proves to be, is still a story that truly devout Christian audiences will want to see (since it really focuses more on Elijah and Rebekah than on Joseph and Mary) at least once if no more.  While Joseph and Mary’s story makes it worth at least one watch, it is not the movie’s only interesting element.  The movie’s casting should also be examined but not for a good reason.

The story at the center of Joseph and Mary is an interesting part of the movie’s overall presentation.  It is one of the lesser-told of the bible’s many stories either orally or on screen.  To that end, it makes the movie at least one watch.  For all that the story does for this movie, it is not the movie’s only notable elements.  The movie’s casting is just as notable, but not for a good reason.  Others have noted, just as this critic will, that the movie’s cast is quite noticeably whitewashed.  Joseph and Mary are played by Kevin Sorbo (Hercules: The Legendary Journeys, God’s Not Dead, Andromeda) and Lara Jean Chorostecki (Hannibal, Camelot, Dan For Mayor) respectively.  Elijah and Rebekah are played by Steven McCarthy (Eye of the Beholder, The Skulls, The Crossing) and Katie Boland (The Master, Daydream Nation, Some Things That Stay).  Boland and McCarthy are both Canadian as is Chorostecki.  Sorbo, according to his bio on IMDB, is from Minnesota.  Even Sean Bell, who plays Tiberius, is from Canada.  Lawrence Bayne (Highlander: The Animated Series, Strange Days at Blake Holsey High, Dog Pound) plays Herod.  He is, yes, also Canadian.  Not even  young Jesus actor Lucius Hoyos (Bark Ranger, The Colony, What If) has any Middle Eastern roots.  Simply put it would have been nice to have seen actors of at least some Middle Eastern descent fill the movie’s key roles versus a full-on white cast.  Making matters worse is that in a number of cases, the actors more than likely were not entirely at an age that (if one wants to use the story’s source material properly) would line up with their seeming ages in the bible.  That makes the movie’s casting more of an issue within the bigger picture of the movie.  To its defense though, it is not the only movie to ever face this issue.  Most recently Exodus: Gods and Kings (2014) came under fire for its mis-casting.  And if one really wants to get specific, the cast of The Ten Commandments (1956) was completely improper, too as have been so many movies’ casts.  Considering this, there is no denying that the movie’s cast detracts from its overall presentation.  But taking the cast into consideration against other miscast movies, one can’t take too many points from the movie.  On that note, the movie’s casting is its only real negative.  So as much as it might take away from the movie, it doesn’t completely cancel out the movie’s positives, one more of which is its production values.

The issues with Joseph and Mary’s castings are undeniable in regards to the movie’s presentation.  It would have been nice to see the movie use actors with at least some Middle Eastern roots, even if said actors were not major name actors.  But keeping in mind that it is not the only movie to ever face this issue on cannot completely ignore the movie.  Considering this, the movie’s story couples with its other positive, its production values, to outweigh that negative and, again, make the movie worth at least one watch.  It is obvious in watching the movie that its production budget wasn’t very big.  The sets look exactly like something that one would expect from an independent Christian film.  In all honesty they give the movie the look of something that was produced by a church group without any major financial backing.  Yet even with that look, its equally novice  shooting style,  and special effects the movie’s presentation becomes even more worth the watch.  It shows that those behind the production didn’t try to make it look like perhaps Exodus: Gods and Kings, Noah, or other similar movies.  Rather, it honestly conjures thoughts of The Ten Commandments thanks to its look.  Believe it or not this is a good thing for the movie.  That look lets audiences know that the movie’s cast and crew just wanted it to be what it was, not one of those overblown mega-blockbusters from Hollywood that hardly tries to stay true to its source material.  It makes the movie that much more worth the watch.  When that natural look (including its shooting style and special effects) is coupled with the movie’s story, the two elements outweigh the movie’s one glaring negative and prove once more why it is worth at least one watch.  They are not enough to make the movie memorable.  One would be lying if one said it is.  But they are enough to make the movie worth, again, at least one chance.

Joseph and Mary, Cinedigm’s new biblically based movie is not the genre’s worst offering nor is it the genre’s best.  It is a movie that while hardly perfect, is still worth at least one watch.  It should be noted, though that considering the movie’s content, it is not a movie aimed at younger audiences, even being biblically based.  Audiences should take this immediately into consideration before watching it.  It story is one that has been very rarely adapted to literary or even cinematic form.  That in itself makes it worth at least one chance.  Its casting is problematic.  There is no denying this.  But it is not the only movie that is guilty of “whitewashing.”  To that end, one cannot take away too many points from its overall presentation.  That is especially the case considering its production values.  Its sets, shooting style, and special effects look like they were done by a church group rather than a studio with any financial backing.  Believe it or not this is actually a good thing.  It sets the movie apart from its counterparts churned out by Hollywood’s major studios (E.g. Exodus: Gods and Kings, Noah) an in a good way.  It makes the movie more endearing for lack of better wording.  When this is considered with the movie’s story and even its problematic casting, it still leaves the movie worth at least one watch.  It is available now in stores and online.  More information on this and other titles from Cinedigm is available online now at: