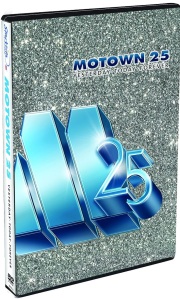 Television in America possesses a rich history in its modern era.  The moon landing, JFK’s assassination, The Korean and Vietnam wars, presidential elections, 9/11 and so many other events fill the history of television in its modern era.  While it would seem that many of the most important events broadcast on television in its modern history are memorable because they are tragic, there are positive events recorded in television’s modern history, too.  Some of the most memorable of those more positive events are concerts that have brought people together from all walks of life.  Live Aid, The Concert For New York, and the Beatles’ first ever live performance on American television each make the list of television’s top live broadcast draws.  Next Tuesday, September 30th, Time Life Entertainment and StarVista Entertainment will add another concert to that list of television’s greatest live concerts when they release Motown 25: Yesterday–Today–Forever.  Motown 25: Yesterday–Today–Forever was originally broadcast on NBC on May 16th, 1983.  This new three-disc DVD presentation marks the first time since its original VHS release in 1983 that the concert has seen the light of day.  Being that this is the first time in just over three decades that it has been released to the public, this edition of Motown 25: Yesterday– Today.-Forever is well worth the price and the watch.  The central reason for that is the sheer magnitude of material included in the overall presentation.  Audiences don’t just get the original broadcast.  They get to hear from the concert’s original heads and some of the artists that performed on that night.  Audiences also get a brief yet still insightful history on the famed “Hitsville USA” as a bonus.  Another reason that audiences will enjoy this recording is the overall audio and video mix.  The painstaking efforts undertaken by those charged with restoring the concert’s footage paid off in spades.  Both the audio and video presented here sound and look just as good as the concert’s original broadcast if not better.  Completing the set is its companion booklet.  The booklet includes a brief yet thorough history on the concert and its lasting impact by author Nelson George and Motown 25 EP Suzanne De Passe.  Also included in the companion booklet is a complete guide to the concert’s lineup and bonus material along with full credits listing those behind the show.  The booklet is the final touch to a package that any old school r&b fan and lover of music and music history will appreciate.

Motown 25: Yesterday–Today–Forever is one of the most enjoyable live recorded concerts in the modern history of television.  As enjoyable as it proves to be even today, it sadly is not one that most people think of when they think of major broadcast concerts.  That view will hopefully change though, after watching this presentation.  The amount of material included in this three-disc set alone is more than enough reason for viewers to change their view of Motown 25: Yesterday–Today–Forever.  That vast amount of material includes not just the original concert recording, but a number of bonuses to go along with it.  Those bonuses include roundtable interviews with both the show’s heads and some of the performers, a brief but still thorough history of Hitsville, USA, and even an in-depth look at the very creation of the concert from pre-production to the finished product.  Audiences will be moved to hear the emotion as the show’s heads discuss their favorite memories from the concert.  There are plenty of laughs along the way.  And there are some tears, too.  The history lesson on Hitsville, USA is especially enjoyable for those that might not be so familiar with the history of the label that started it all for so many legends.  And the insight into the concert’s creation will interest anyone with any interest in television production.  Collectively, those bonuses along with the concert itself more than make Motown 25: Yesterday–Today–Forever worth the watch whether one is a lover of old school lover of r&B, a music lover in general or even an individual with a love for music history.  And it is just part of what makes the collection worth the watch, too.  There is far more worth nothing that audiences will appreciate and enjoy just as much.  Another aspect worth noting is the overall quality of the concert’s footage (I.E. its audio and video mix).

The vast amount of material that makes up the body of Motown 25 is by itself more than enough reason for every lover of music.  It is just one part of the whole that makes the viewing experience a joy for audiences within this presentation.  The presentation’s collective audio and video mix adds to the presentation’s enjoyment.  StarVista Entertainment and Time Life Entertainment included a disclaimer before Motown 25’s central concert presentation begins stating the footage may have some minor discrepancies at various points throughout the concert.  But audiences will see that if there are any such discrepancies, they are too minute to see with the naked eye.  Those charged with restoring the footage for its presentation in this set are to be commended for their painstaking efforts as they paid off in spades.  That applies both to the audio and video mix.  Every note comes through crystal clear as does every single camera shot.  Again, kudos go out to those responsible for bringing the footage back to life as it most definitely looks and sounds as good as it must have in its original broadcast.

The work that went into restoring the footage from the Motown 25 concert and the amount of material included in the new upcoming box set collectively makes it such an enjoyable experience for anyone that has any love for the classics and for music history in general.  As enjoyable as they make the experience together, the people at Star Vista and Time Life didn’t stop there.  They also included a companion booklet with the set that adds even more depth to the presentation.  The companion booklet included with this three-disc set features its own look back at the Motown 25 concert from the show’s EP, Suzanne De Passe as well as one from author Nelson George, who wrote The Hippest Trip in America: Soul Train and the Evolution of Dance and Style.  Their shared insights offer a look at the concert that echoes the sentiments shared in the round table discussions that were included as bonus features.  Along with the additional insight and background on the concert, the set’s companion booklet also includes a complete song-by-song guide to the concert and bonus features.  And closing it out is a full listing of the names of those responsible for both the original concert and its re-working for its presentation here.  It finishes off a set that is arguably one more of this year’s best new archived live recordings.

Motown 25: Yesterday–Today–Forever is a diamond in the rough. With its full concert experience, bonus interviews and retrospective roundtable discussions, it offers audiences a concert experience unlike most others released so far this year.  The painstaking efforts on the part of those charged with re-mastering the concert’s original footage make the concert even more enjoyable for audiences.  And the bonus booklet added as a companion to the concert adds even more depth and insight to the show and its importance to the history of both r&b and the music world in whole.  All three factors together make Motown 25: Yesterday–Today–Forever one of this year’s best new archived live recordings and one that every lover of music will enjoy.  It will be available next Tuesday, September 30th and can be ordered online via Amazon at http://www.amazon.com/Motown-25-Yesterday-Today-Forever/dp/B00L9OPA56/ref=sr_1_1?s=movies-tv&ie=UTF8&qid=1411671053&sr=1-1&keywords=motown+25th+anniversary+television+special.  A special limited edition six-disc set and an expanded limited edition six-DVD/eight-CD set online via the Time Life online store at http://timelife.com/products/motown-25-yesterday-today-forever.  More information on these and other releases from Time Life and StarVista is available online at