The band premiered its new single, ‘The Modern World’ Wednesday, along with the song’s companion video. The song is available to stream and download through Spotify, iTunes, and Apple Music.

The musical arrangement featured in ‘The Modern World’ presents a sound that leaves audiences imagining what Train would sound like if it was a southern/stoner rock act, what with the use of the guitars, keyboards and vocals. Speaking of the vocals, the fuzzed effect makes comprehension of the lyrics difficult without a lyrics sheet to reference. Though, even without comment in the press release distributed about the debut of the song and its video, one can infer at least lightly, that the song is a contemplative work that focuses on the current state of the world.

The video for ‘The Modern World’ features the band performing its single against a desert backdrop as a woman makes her way on foot and by car through the landscape.

“The video for this song came together really only because of our amazing filmmaker friends from Silver Sky,” said Shlosser. “We had a rough concept in mind but they came in with the last minute vision and miraculously knocked out the shoot in a single day without sacrificing any artistic value. I think each shot is so provocative and beautiful and lends so much to what we were feeling with it. We’re fortunate enough to have our home base be Escape Studios in Pioneertown, California (@escape) and wanted to showcase the beauty of this land that inspires it all so we shot the entire thing here. Shout out to the visionary, Rocco Gardner for that!”

Shlosser also talked about the song’s musical arrangement during his interview.

“‘The Modern World’ has been through a few production steps before we landed here,” he said. [Front man] Chris [Ayden] and I had taken it from a very progressive rock type of track and attempted to simplify things and focus on the vocals. We then sat in the studio with our dear friend, Matt Sorum (Guns ‘N Roses, Velvet Revolver) who worked on the arrangement with us which pulled the whole thing into focus. A bit more production and the addition of Greg Cahill on Hammond and piano and Michael Johnson on drums and we felt we totally nailed our sound that is now stretching across the entire album we’re finishing up right now”.

More information on Illumination Road’s new single and video is available along with all of the band’s latest news at:

The video, captured Nov. 11, 2018 at the Aztec Theater in San Antonio, TX was of Gibbons and his fellow musicians — drummer Matt Sorum (Guns ‘N’ Roses, Velvet Revolver) and guitarist Austin Hanks — performing the song ‘Missin Yo’ Kissin.”  The performance was part of Gibbons’ 2018 tour in support of his album The Big Bad Blues. Gibbons’ long-time guitar tech Elwood Francis performed on harmonica during the tour.

Photographer/videographer Harry Reese recorded the new featured performance.  Reese used four cameras to capture the performance, two of which were GoPro cameras mounted on Sorum’s drumset. The other two cameras were handheld units that Reese used as he traversed the stage.

The video, which was saved to a hard drive, was allegedly forgotten once the tour was over, and unearthed by Sorum just two weeks ago, leading to its  premiere.

Gibbons talked about the video’s discovery in a recent interview.

“It’s fortuitous that Matt remembered the video and fished it out of his stick bag,” he said.  “Now, more than ever, this is an example of our go-to phrase, ‘Blues you can use.'”

Gibbons’ album went on to earn top honors at the 2019 Blues Music Awards, taking home the Best Blues Rock Album award. Due to a scheduling conflict caused by a ZZ Top performance the same night, Gibbons was unable to accept the award, so his wife Gilligan Stillwater accepted the award on his behalf.

More information on The Big Bad Blues is available online along with all of Billy Gibbons’ latest news at: 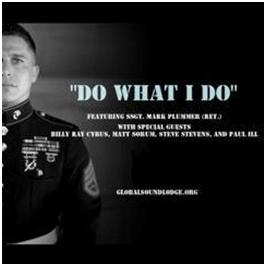 The duo will appear alongside retired SSGT. Mark Plummer on HLN TV’s Morning Express With Robin Meade to  discuss the new song ‘Do What I Do.’ The trio’s appearance is part of the network’s Veteran’s Day coverage. The performance is scheduled for 9:45am ET.

‘Do What I Do’ is an original song written by Plummer. It highlights the impact of Post-Traumatic Stress Disorder (PTSD) on veterans. The song was released Monday, November 10th in honor of Veterans Day. The video for the song, which also features Steve Stevens (Billy Idol), can be viewed online now via YouTube. Plummer originally wrote the song about his own personal ongoing battle with PTSD after serving three tours of duty in Iraq. Plummer discussed the song in a recent interview noting how the song came to life and his hopes of it serving as an aid to other veterans suffering from PTSD. “Music therapy helped me find a way to express myself when nothing else worked,” he said. “It helped me give a ‘VOICE’ to a message that many of our veterans share and cannot speak of. I can now share this message with others thanks to the healing power of music. Music has always been a part of my life, but I never knew it would be one of my biggest weapons to fight and win my own personal battles with PTSD.”

Matt Sorum (Guns N’ Roses, Velvet Revolver) expanded on Plummer’s thoughts. He explained how his experience working with veterans suffering from PTSD played a role in his willingness to help record the song. “PTSD is a serious issue among our veterans–it takes 22 lives a day due to suicide,” he said. “I have seen first-hand how healing music can be to the men and women suffering from this disorder, and hope to bring this program to many more vets around the country.” Sorum’s own work with veterans started after he partnered with the Wounded Warrior Battalion at Camp Pendleton in San Diego, CA. That partnership led Sorum to found the Global Sound Lodge. The Global Sound Lodge is a charity that provides a music for healing program. It donates instruments to orphanages, shelters, and veterans’ programs around the world. More information on the Global Sound Lodge is available online at:

Cyrus and Sorum’s fans can keep up with their latest news and more online at: