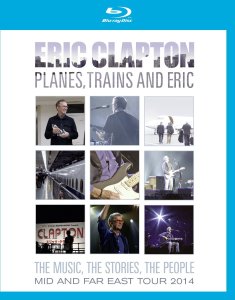 Planes, Trains, And Eric will be released on DVD and Blu-ray on Tuesday, November 4th.  The film documents Clapton’s 2014 tour through the Middle East and Japan.  It features both documentation of his tour and thirteen full-length performances.  There are also interviews with Clapton and his band mates during rehearsal, soundcheck and even in the course of travelling from venue to venue.  On board for the ride on Clapton’s 2014 tour were: Paul Carrack (Hammond organ & vocals), Nathan East (bass/vocals), Chris Stainton (keyboards), Michelle Jordan (backing vocals), Shar White (backing vocals), and legendary drummer Steve Gadd (drums).  The complete listing of songs performed in this documentary is noted below.

5) I Shot The Sherriff

9) Key To The Highway

10) Before You Accuse Me