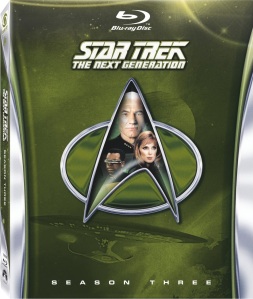 One of the most anticipated movies of the Summer 2013 movie season is the upcoming sequel to the 2009 reboot of Star Trek.  Just in time for the release of Star Trek: Into Darkness, Paramount Studios and CBS Home Entertainment have released the third season of the highly acclaimed series, Star Trek The Next Generation.  From here on out, it will be shortened to Star Trek TNG.  Star Trek TNG Season Three is considered by many fans of the show to be one of its best.  It is where the show started to turn around and start to take off.  That is thanks in large part to the leadership of head writer Michael Piller.  It was under his leadership that great episodes including: “The Offspring”, “Yesterday’s Enterprise” and “Sins of The Father” came about.  And who can forget what is considered one of television’s best ever episodes in the two part episode, “Best of Both Worlds?”  These episodes are just part of the whole that make Season Three so great now that it is available on a five-disc blu-ray box set.  The bonus features included also play a role in this new set’s success.  And of course, one has to also take into account the set’s packaging, which is just as impressive as every other aspect of the box.  All assembled together, it makes for a box set that any true hardcore fan of Star Trek TNG will appreciate and enjoy with every viewing.

The episodes included in the third season of Star Trek TNG are some of the series finest.  A prime example of this comes in the form of “The Offpspring”, “Yesterday’s Enterprise” and “Sins of The Father.”  In “The Offspring”, Data has one of his first tastes of being human when he creates an android child for which he can care.  This episode is a wonderful example of art imitating life.  Just as Data didn’t know what to expect as a parent, neither do real parents.  And Captain Picard’s reaction to Data on Data’s announcement was just like that of a parent to perhaps his or her own child announcing the expectation of a new child.  Data is forced to learn his “offspring” and she is forced to learn about the world around her.  Again, it is such a mirror image of actual life.  Much the same can be said of the episode, “Sins of the Father.”  This episode gave the show’s writers more chance to show a more “human” side to Worf when he is forced to return to the Klingon home world and answer for charges placed against his father.  This episode also introduces Worf’s brother.  It is those family interactions with his brother and standing up for his father that shows a largely hidden side of Worf.  Again, this is art imitating life.  There are people much like Worf who would prefer to keep their gentler, more caring side hidden so as to maintain a certain reputation.  Again, this mirror image of life makes the suspension of disbelief that much easier, and thus enjoyment of the episode that much easier in turn.

Both “Sins of the Father” and “The Offspring” are episodes to which audiences can relate so easily.  That’s because of the ability to relate to these episodes.  Season Three also offers audiences episodes that are less related to regular life and more related to scientific theory.  Such is the case of “Yesterday’s Enterprise.”  Audiences get in this episode the concept of whether wormholes exist and whether they are more closely related to black holes or are perhaps extraterrestrial passageways between time and space.  Yes, this is a deep concept.  And the writers obviously knew this.  That’s because they didn’t present the theory in a fashion that would be above the heads of casual sci-fi fans and not too much below those that are far more deeply involved in scientific theory.  This episode also sees the return of Tasha Yar, who in herself presents another theory linked to the interconnectivity of events at given points in time.  That, along with the general storytelling, makes this another wonderful addition to the hit sci-fi show’s most integral season.

The writing for the episodes noted here (and the others not listed) makes Star Trek TNG Season Three the best in the show’s seven season run.  Audiences will understand and appreciate this even more in the bonus three part feature, “Resistance is Futile – Assimilating Star Trek: The Next Generation.”  Audiences get to hear from the writers and the main cast of Star Trek TNG in this feature.  Viewers will be quite interested to hear just how much went on behind the scenes in order to bring Season Three’s episodes to life.  There apparently was a lot of turmoil among the show’s staff of writers; so much so that at one point, there might have been either a mutiny or an all out walk-out.  There are also discussions from members of the main cast, including: Patrick Stewart, Michael Dorn, Gates McFadden, and Brent Spiner.  McFadden discusses coming back to the show after having been away for a season.  Marina Sirtis, who played Counselor Troi, adds her own thoughts on McFadden returning to the show.  She shares that she was quite happy to have her friend back.  Brent Spiner’s thoughts on being addressed by the public as Data instead of Mr. Spiner are definitely worth checking out.  He makes perfect sense in what he shares.  And Michael Dorn sharing some funny moments in taping episodes of the show will have audiences rolling with laughter.  Again, it is one more positive to a set that already has so much going for it.

The episodes written for Star Trek TNG Season Three and the discussions about the writing processes together make this latest box set another must have for any true Trek fan.  There is at least one more aspect of the set that viewers will appreciate.  That aspect is the set’s packaging.  The set is comprised of five Blu-ray discs.  Each disc is placed in its own spot inside the case in what is increasingly becoming the standard for multi-disc box set packaging.  Following this model protects the discs, thus preserving them for a much longer period of time than those sets from other shows that might have otherwise been packaged in a less ergonomic style.  That is another positive to the set’s packaging.  Because of the style in which this set was packaged, it takes up less room on a DVD and/or Blu-ray rack than more traditional box sets.  This is an example of the adage that less is more.  This combined with everything else presented in the new Star Trek TNG Season Three box set, makes this set an absolute must have for those who perhaps would rather see the show in high definition rather than standard def.  It is available now in stores and online.