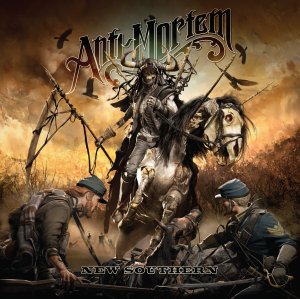 Anti-Mortem’s debut record New Southern is one of the best new hard rock records of 2014. The band’s debut record, which is available now in stores and online, has taken the best elements of Black Label Society, Hellyeah, and Pantera—just to name a few—and has blended them together to make a record that clearly shows why the band signed with what is one of hard rock’s “big three” labels in Nuclear Blast Records. For those that might be curious, the other pair of labels that comprise that “big three” are Metal Blade Records and Century Media Records. The band grabs listeners right off the top in the album’s opener ‘Words of Wisdom’ and doesn’t let go until the final strains of the album’s closer. Along the way, the band more than makes its argument as to why it deserves to be on any critic’s list of the year’s best new hard rock records. Case in point the band’s latest single ‘Truck Stop Special’ and the southern rock sludge of ‘Black Heartbeat.’ These songs are just a few examples of why Anti-Mortem’s New Southern has earned a spot at least on this critic’s list of the year’s top new hard rock records. Audiences will agree that any of the songs on this record show why the band deserves such an honor from any critic.

Anti-Mortem proves to audiences why its debut record is one of the year’s best new hard rock records right off the top in the album’s opener ‘Words of Wisdom.’ The comparisons to Black Label Society and Hellyeah are instantaneous thanks to the heavy guitar riffs of Nevada Romo and Zain Smith, and front man Larado Romo’s searing vocals. In an era when it seems that crunching down-tuned guitars and indecipherable cookie monster growls seem to be leading the way in the rock world, this combination of musicianship is a breath of fresh air even in the rock community. Of course the equally pounding drumming of Levi Dickerson and bassist Corey Henderson’s solid low end aren’t to be forgotten, either. They add their own depth to the song’s musical side as Larado Romo sings (Yes, he actually sings to a certain extent unlike so many rock vocalists today), “I was told my whole life/Don’t do this/Don’t do that/Force your opinion on me/Like it was fact/You tried to hypnotize/And teach me to act/the truth is you lied/And there’s no going back.” He and his band mates go on to sing in the song’s chorus, “You wonder/What’s under/What’s underneath my skin/You wonder what is under/Underneath my/I see no reason why/We should lay down and die/No words of wisdom.” There is no cryptic hidden message here. This song is a full-on, horns-high hard rock anthem. And it will have any true fan of the genre singing along with pride. That pride doesn’t lessen at all even after this song ends. That’s evident in another of the album’s highest points, ‘Truck Stop Special.’

‘Truck Stop Special’ is southern sludge rock at its finest. What can be said of this song but it is destined to be just as much a favorite for audiences both on the album and in a live setting. It’s a powerful song both musically and lyrically. Lyrically, Romo comes across as singing about making the most of life. This argument could be made in noting the song’s chorus. Romo sings in the chorus, “You can’t live your life, no/With your head in the sand/You can’t waste your time, son/On a fool’s errand.” That argument is made even stronger as he sings in the song’s second verse, “No money to drown in/No hope to hang/Trouble’s the way I’m living child/When there ain’t no fame/Our education boy/I’ll show you how to be yeah/To never want nothing son/To take all you need.” In the song’s final verse, Romo goes on to note how the last to a given point suffer the possibility of losing everything. He is speaking metaphorically here saying that those that waste their time in life are in danger of negative consequences. Overall, he is saying people shouldn’t waste their lives and let life pass them by. That carpe diem message of sorts next to the song’s solid driving musical makes this song one more of so many of New Southern’s many high points.

The members of Anti-Mortem show time and again throughout the course of New Southern’s twelve tracks and forty-six total minutes just why the band’s debut record is so deserving of being added to any critic’s list of the year’s best new hard rock records. ‘Truck Stop Special’ and ‘Words of Wisdom’ are both prime examples of why it deserves to be on that list. There is one more song that could be noted among the many standout tracks on this album proving that argument. The song in question, ‘Black Heartbeat’ comes almost halfway through the album. The song focuses on broken relationship, lyrically. But it doesn’t come across in the typical ‘oh woe is me’ style of so many songs. It really captures the mixed emotions of anger and pain felt by someone that has been on the receiving end of a broken relationship. And Romo makes no bones about the song’s subject matter as he sings, “It’s safe to say/It’s over now/At least until you call/Sometimes I wonder why I care/And loved you at all/Go on and pretend/It’s not your fault/Your cold black heartbeat/Has come to a halt/So use me/Abuse me/To get what you need/Confuse me/Lie to me/Your damage has been done/You can’t take advantage of my love anymore/No trust/Don’t wanna see/Then just walk out the door.” Some out there might not like the comparison, but one could almost compare this piece to Theory of a Deadman’s song ‘Get What You Deserve.’ The two songs are very similar both in terms of their themes and musical sides. This isn’t necessarily a bad thing, either. ‘Get What You Deserve’ is rather scathing in its own way just as this song proves to be. And it comes from a similar vantage point. It’s one of those pieces that when one is going through a separation of any kind will most definitely empower listeners and help them to get through such times. Ergo, ‘Black Heartbeat’ will have done its job. And in turn it will have proven once more just why New Southern more than deserves to be considered one of this year’s best new hard rock records.

All three of the songs noted in this review are prime examples of why New Southern deserves a spot on every critic’s list of the year’s best new hard rock records. They are also prime examples of why this album deserves a spot on the CD rack of every purist hard rock and metal fan. They aren’t the only examples of the album’s solidity. Every song on this album could be used for this argument. That’s truly saying something. The album is available now in stores and online. It can also be purchased at any of the upcoming live performances on the band’s current concert schedule. The band will kick off a summer tour at Strummer’s in Fresno, California on Tuesday, July 8th. Audiences can check out the band’s current tour itinerary online now and even buy New Southern at the band’s official website, http://anti-mortem.com. The band’s current tour schedule and updates are also available via Facebook and Twitter at http://www.facebook.com/AntiMortemUSA and http://twitter.com/antimortemusa. To keep up with the latest sports and entertainment reviews and news, go online to http://www.facebook.com/philspicks and “Like” it. Fans can always keep up with the latest sports and entertainment reviews and news in the Phil’s Picks blog at https://philspicks.wordpress.com.