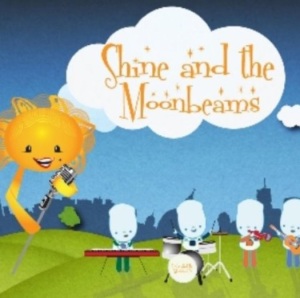 The brand new self-titled album from Shine and the Moonbeams is an easy candidate for one of the year’s best albums for kids.  With its mix of upbeat music an equally uplifting lyrics, this album is one that even parents will appreciate.  It all opens with a fun Latin-tinged piece titled, ‘The Melody in Me’ that is sure to have kids and parents alike on their feet and dancing to the music.  It starts off with a group of horns set against the band clapping in time to the music while drummer Russell Carter kicks in a light New Jack swing beat.  That alone is enough to get kids and their parents up and moving.  Singer Shawanna “Shine” Kemp’s vocals make the song even more fun when she comes in.  What she sings isn’t just some kid friendly happy happy joy joy type of song.  It’s a song that celebrates the joy of music, period.  She sings, “There’s a melody/Music in my feet/Can you hear this beat/Right here in my feet/There’s a melody/Music in my hands/Can you hear this band/Right here in my hands/And I can clap my hands/And I can stomp my feet/And I can dance and I can sing/Sing it with me.”  It’s a fun song, plain and simple.  It’s one to which the whole family will find itself singing and dancing.  Suffice it to say that it is one heck of a first impression for this band.  Things only get more fun for families as the band launches into the album’s second song, ‘Imagination,’

‘Imagination’ is just as fun as the album’s opener for a couple of reasons.  The first and most obvious of those reasons is the song’s lyrical side.  It’s a song that encourages young listeners to—in simple terms—use their imaginations.  As the years have passed by and technology has advanced with each year, young audiences have increasingly demanded instant gratification.  It’s even gotten to the point that rather than learning to use their imaginations, children can just turn on Nick, Jr. or Disney, Jr., and voila, there’s the imagination right in front of them.  It takes away their reason to think for themselves.  Here in this song though, Kemp tells her young audiences just how fun it is to not get that instant gratification; to think for themselves and reap the rewards of doing so.  She sings, “I can be a lion or a jellyfish/I can be anything that I wish/Soccer player, rocket scientist/A peanut butter sandwich/When I use my/Use my imagination/yeah/I’m in a forest with two hundred-foot trees/I’m on the ocean sailing the seven seas/I’m a river/I’m a mountain/I’m even a breeze/I’m a bee/I’m a beehive/I’m even a sting when I use my/Use my imagination/Yeah/It comes in handy/In any situation/Yeah, yeah.” This is just one of a handful of inspiring and uplifting songs that parents will have no problem playing with and for their kids.  There’s at least one more prime example of what this album offers to its listeners.  It’s one of so many for which parents will be thankful.  That song is ‘Bully Bully.’

‘Bully Bully’ is a fitting song in the current era as the country continues to tackle the ongoing bullying epidemic of childhood bullying.  Kemp and her band mates sing straight forward about the problem of bullying, “It won’t stop until we all say stop/So STOP/Stop bullying me/Stop bullying me.”  This is a simple statement.  But it’s such a powerful statement at the same time.  It’s a true statement.  Rather than letting children be victims and in many cases become martyrs of sorts, all it takes is simply standing up to bullies and telling them to stop.  It’s incredible what someone standing up to a bully can do for a person.  The force that Kemp and company use when they say “STOP” really drives home the importance of not being mousy about standing up to bullies, either.  One doesn’t have to be as mean as the bullies.  One needs just stand up to a bully and be firm.  Tell that bully in a voice that lets them know a person means business plain and simple, “STOP!”  They’ll typically back down pretty quickly.  This is just one more of so many outstanding songs on this debut effort from Shine and the Moonbeams.  It’s one of so many songs that again, makes it one of the best albums of 2013 for both children and parents alike.  The album is available now.  It can be ordered online via Amazon at http://www.amazon.com/Shine-Your/dp/B00DDBEBE4/ref=sr_1_cc_2?s=aps&ie=UTF8&qid=1371757895&sr=1-2-catcorr&keywords=Shine+and+the+Moonbeams.

The band is currently touring in support of its album.  Its next performance is at the River Celibration Day festival at West Harlem Piers Park on June 29th.  Fans can get a complete listing of the band’s tour dates and all of the latest news from the band on its official website at http://shineandthemoonbeams.com and on its official Facebook page, http://www.facebook.com/pages/Shine-and-the-Moonbeams/234481786657193.

PBS debuted earlier this Spring, a new episode of its hit science program, NOVA that is a good fit for the start of the annual hurricane season in Hurricane Sandy: Inside the Megastorm.  Being that this year’s hurricane season starts tomorrow, June 1st, what better time for audiences to check out this episode?  Hurricane Sandy: Inside the Megastorm is an interesting look into what was the single most destructive storm of the 2012 hurricane season.  It offers viewers a first-hand look at the destruction caused throughout New York and New Jersey through those that were affected by the storm.  It also uses interviews with professionals and academics to explain what exactly led to the creation of what would eventually be termed, “Frankenstorm” because it hit right around Halloween.  In connection, the discussions on whether or not global warming played a role in its power is certain to become a point of contention as they seem to counter one another.  Despite noting discussions on what can be done to better protect ourselves from megastorms, those discussions are in fact extremely brief.  Luckily, everything else that went into this program more than makes up for that lack, leading this episode to be another interesting feature from NOVA.

The majority of the roughly hour-long feature on Hurricane Sandy is spent telling the story of Sandy’s creation to its aftermath.  Most interesting to note here is how those in the Northeast largely played it off because of the ineffectiveness of Hurricane Irene, which hit the New York region in 2011.  This is the same mentality shared among so many throughout the East Coast and Gulf Coast to this day.  But obviously that view has changed as a result of Sandy.  The sights of flooding and the stories of the lives affected by the storm will move any viewer; sometimes even to the point of tears.  This is just the tip of the iceberg.  The very brief discussion on the European hurricane models and how they, too were ignored makes the story of this originally unassuming storm even more interesting.  Viewers will take interest in the note that officials with NOAA had themselves ignored European models that had months prior predicted Sandy would in fact make its fateful Westerly turn and head straight into the heart of New York and New Jersey.  This adds interest in that Americans rarely—if ever—hear anything from forecasters in the U.S. about European models versus American models each year.  Perhaps this could be the point of discussion in a later episode of NOVA.

While this episode serves as a starting point for a deeper discussion on European hurricane models versus American “spaghetti models”, the discussions on whether or not global warming played a role in Sandy’s size and destructive power are sure to become even more of a point of contention among viewers, whether citizens or professional meteorologists.  Viewers should know that the program does in fact note that a Nor’easter did play a role in the storm’s size and strength.  That fact is not ignored here.  But later in the program, individuals are interviewed to discuss the role of global warming on Sandy and potential future storms.  Those that pay close attention will note that the discussions tend to contradict one another. At first, it is noted that there is no definitive link between global warming and the size and strength of storms, nor their frequency.  In almost the same breath though, those same individuals note that there is a connection between rising atmospheric temperatures and water temperatures, which are in turn, linked to the decrease in ice at the polar ice caps, rising ocean levels, and rising water temperatures thus causing an increase not so much in the quantity of storms, but in their power.  The discussions in question are even more in depth.  This is just a quick overview.  But from this alone, it certainly seems that the discussions included here are very contradictory and are certain to be a point of major contention.  Is this a good thing or a bad thing?  The answer to that is sure to be rather contentious in itself.  Because of that, it’s just one more factor that makes Hurricane Sandy: Inside the Megastorm a program that anyone will want to see, whether casual viewer or a professional within the “weather industry.”  Hurricane Sandy: Inside the Megastorm is available now.  It can be ordered online via the PBS store at http://www.shoppbs.org/product/index.jsp?productId=17355946&cp=&kw=inside+the+megastorm&origkw=Inside+The+Megastorm&sr=1.

To keep up with the latest news from NOVA, fans can follow the show on Facebook at https://www.facebook.com/NOVAonline and at http://www.pbs.org/nova.