PBS is renewing its focus on the topic of engineering in a newly released episode of NOVA.

NOVA: Why Bridges Collapse is available now on DVD and digital.  The program opens with the story of the collapse of the Morandi Bridge in Genoa, Italy in Aug. 2018.  The collapse led to the death of 43 people.

From that point, the program delves into the world of engineering and what may have led to the collapse of the bridge, which had stood for half a century.  It compares that bridge’s failure to the collapses over the years of similar structures in West Virginia — the Silver Bridge over the Ohio River — and in Minnesota — the I-35W Bridge — in an effort to find out what can and should be done in the future to ensure such disasters no longer happen.

NOVA: Why Bridges Collapse is retailing for MSRP of $24.99, but can be ordered at a reduced price of $19.99 through PBS’ online store.

More information on this and other episodes of NOVA is available online at:

PBS is examining the rise of automated vehicles in another new episode of its hit science-based series NOVA.

NOVA: Look Who’s Driving is scheduled for release Tuesday.  The program focuses on the increasing presence of automated vehicles on America’s roads.  The new episode also examines the safety of those computer-driven vehicles.

In the process, the program examines the number of start-ups that have come into existence in the rush to take advantage of this latest technological advance from the auto industry.  It examines whether those companies are just cashing in on the trend or if they are actually working to produced a safe product for consumers.

More information on this and other episodes of NOVA is available online now at: 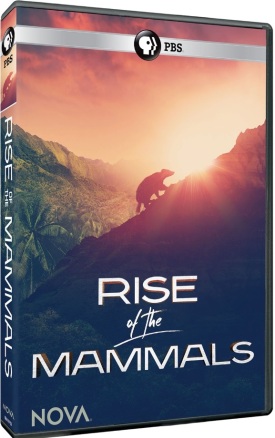 Approximately 66 million years ago, an asteroid collided with Earth and caused an ecological disaster that wiped out the dinosaurs and led to the start of what has since been dubbed the “Age of Mammals.”  Now in a new episode of its hit science-based series NOVA, audiences are taken through that age and the evolution of mammals.

Scheduled for release Jan. 21 on DVD and digital, NOVA: Rise of the Mammals examines which creatures survived the disaster that wiped out three out of four every kind of living being following the impact of the noted asteroid.  It also examines how quickly the noted surviving species returned to prominence and how the planet in whole recovered from the noted global cataclysm.

The examination comes from the discovery, in 2016, of fossils that show how various plants and animals came back from the brink of extinction.

NOVA: Rise of the Mammals will retail for MSRP of $24.99, but can be ordered now at a reduced price of $19.99 through PBS’ online store.  More information on this and other episodes of NOVA is available online at:

PBS Distribution will release a new episode of PBS’ series NOVA later this month that focus on the Dead Sea Scrolls.

NOVA: Dead Sea Scroll Detectives is scheduled for release Jan. 21 on DVD and digital.  The program follows scientists as they work to figure out why some of the Dead Sea Scrolls have survived for more than 2,000 years while other others have fallen victim to the elements in that time.

The Dead Sea Scrolls are the oldest known copy of the Hebrew Bible.  To this day, it is still not known who composed the writings in the scrolls.  It is also unknown if more scrolls exist anywhere else.

As the scientists work to decode the writings on the scroll fragments, they also discover counterfeit copies of the scrolls.

NOVA: Dead Sea Scroll Detectives will retail for MSRP of $24.99, but can be ordered at a reduced price of $19.99 through PBS’ online store.

More information on this and other episodes of NOVA is available at:

Movies based on actual events and biased news from both sides of the aisle have done so much damage to the world.  The movies based on actual events are over embellished forgettable works that tell half the story if even that.  The biased news on both sides of the aisle tells just as little as the noted movies, if not less.  To that end, one can’t help but be very thankful for all the new documentaries that are released each year.  The documentaries released this year went a long way toward making up for the problems caused by the noted news and movies, so many that there were more than enough to fit on any critic’s list of the year’s top new documentaries, but this critic tried to assemble a fitting list.

This year’s list features documentaries centered on topics, such as the history of Country Music, the Apollo 11 mission and a famed movie star.  Each documentary brings its own important and enjoyable presentation for audiences thanks to its unique content and story.  From one to the next, each proves itself fully deserving of a spot on any critic’s list of the year’s top new docs.  This critic’s list features, as with previous lists, the top 10 titles from the year as well as five honorable mention titles for a total  of 15 titles.  This list’s titles come from PBS, Cohen Media Group, Magnolia Pictures and even Shout! Factory, so they are not just from one company.  In other words, there is some diversity here.  Without any further ado, here for your consideration if Phil’s Picks 2019 Top 10 New Documentaries

PBS Distribution is taking audiences back into the cosmos again with another new episode of NOVA.

NOVA: The Planets is scheduled for release Aug. 27 on Blu-ray and DVD.  The five-episode presentation takes viewers from the Milky Way’s inner planets all the way to its outermost regions.

Narrated by actor Zachary Quinto (StarTrek, Star Trek Into Darkness, Star Trek Beyond), takes viewers on the intergalactic journey using the most up-to-date planetary research and footage captured by orbiters, landers and rovers.  From the mystery of why Earth is the only planet of the rocky planets that can sustain life to how the outer planets and gas giants came to form and sit where they do now, the program takes viewers on a previously inexperienced journey through the galaxy. PBS Distribution is taking audiences on another archaeological dig next week in another new episode of NOVA.

NOVA: Lost Viking Army is scheduled for release Aug. 13 on DVD.  The program follows a bio-archaeologist named  Cat Jarman who believes that a mass grave discovered roughly forty years ago is the final resting place of an infamous Viking force known as the “Great Heathen Army.”

The “Great Heathen Army,” also known as the “Great Danish Army,” was a group of Vikings who came together from Norway, Sweden and Denmark to invade England in 865 AD.  The army’s conquest lasted a total of 14 years.  The legend behind the raid is that it was a reprisal for the execution of the Viking King Ragnar Lothrbok by Aella of Northumbria.

As this episode of NOVA presents, investigations of the mass grave and stories behind the Viking raid lead to revelations about items, such as female warriors taking part in the conflict and a king reunited with his son in death.

NOVA: Lost Viking Army will retail for MSRP of $24.99, but can be pre-ordered at a reduced price of $19.99 through PBS’ store.  More information on this and other episodes of NOVA is available online now at:

philspicks
Create a free website or blog at WordPress.com.