The wait is almost over.  Eagle of Death Metal will release worldwide its latest live recording I Love You All The Time: Live at the Olympia In Paris.  This 19-song (technically 22 with the three bonus performances) recording is an electrifying performance from the band, and a truly powerful statement in itself to those who would try to spread fear and terror around the globe.  It is a statement to those individuals that they will not leave any one living in fear and terror, but rather will unite the world.  That is evident through the band’s fiery performance, which will be discussed later.  Examining the performance on another level, it is a concert that new and more seasoned fans alike will appreciate in part for its wide-reaching set list, which will be discussed shortly.  The concert’s production values round out its most important elements.  Each element, audiences will note, is important in its own right to the recording’s whole.  All things considered, they make this recording one more of this year’s top new live recordings and yet more proof of why Eagle Rock Entertainment is still the leader in live recordings.

Eagles of Death Metal’s latest live recording, I Love You All The Time: Live at the Olympia in Paris, is a strong new musical effort and statement from the veteran rock outfit.  That is evidenced in part through the recording’s extensive set list.  The primary set list consists of 19 total songs, which are lifted from each of the band’s now four full-length studio recordings.  The addition of the three bonus songs, which are themselves pulled from the band’s first three albums, pushes that total to 22 songs.  Audiences will be pleased to see that a clear attempt to balance the set list was made in reading through the show’s featured songs.  Counting the bonus tracks, Peace, Love, Death Metal and Death By Sexy each received seven nods throughout the concert.  The band’s most recent album, Zipper Down (2015) is represented with five songs.  Heart On, the band’s third album, is the most lightly represented of the band’s albums, with three songs pulled for the show.  Why it was so conservatively represented is anyone’s guess.  Regardless, it is clear that the band made a full-on effort to give audiences the fullest picture possible of its catalogue in this concert.  That being the case, it becomes clear why the show’s set list is so critical to this recording.  It takes the audiences quite impressively through the band’s body of work from beginning to present.  Keeping this in mind, the concert’s set list is only one of its key elements to be examined.  The band’s performance of that set list is just as important to examine as the set list itself.

The band’s performance of its rich set list is so important to discuss here in that it one must take into account that this is a make-up show from the band’s Feb. 16, 2016 show at the Bataclan Theatre that was tragically cut short by terrorists.  The band’s energy throughout the course of the 90-minute-plus concert is so frenetic.  From front man Jesse Hughes’ full-on performance to Josh Homme and Julian Dorio’s often-time synchronized drumming to the work put in by the rest of the musicians on stage, not a single second is spared.  The band puts everything on that proverbial table throughout and leaves nothing there by the show’s end.  It shows entirely how much being able to perform the show meant to the band.  The audience in attendance showed its appreciation for that devotion, too, giving its all back to the band.  The result is a performance that will have home viewers just as enthralled and engaged as the audiences who were present at the concert’s taping, making the show pass before audiences even realize it is done.  That is a powerful statement in itself.  It is not the concert’s last important element either, even as important as it proves to be.  The concert’s production values round out its most important elements.

The production values presented throughout the course of EODM’s new live recording are collectively so important because they serve to heighten and really illustrate the energy exuded by the band in its performance.  This includes the original production and post production.  The camera work gives audiences the best seat in the house (or rather in their own houses; yes, that bad pun was intended), as they take viewers on stage with the band, into the crowd, and even into one of the theatre’s elevators with Hughes.  Through those various angles (and the hard work put in by the editors in post), audiences get a full picture of the Olympia’s size, which is apparently not that big.  The audio mix is just as important to note here.  Even with the Olympia being a semi-quaint venue, its openness absolutely cries out for a home theater system for those wanting a full concert experience.  That is not to say that the audio doesn’t sound good without a home theater system, but it such a system would not hurt the experience. Again, kudos go to those behind the editing for making the sound come out so well in the end. When this is all joined with the positives of the concert’s set list and the band’s performance the result is a concert that EODM fans everywhere will appreciate and enjoy and a work that is another one of this year’s top new live recordings.

I Love You All The Time: Live at the Olympia in Paris is one of this year’s top new live recordings and more proof of why Eagle Rock Entertainment remains today the leader in live recordings.  It is a strong, bold statement from Eagles of Death Metal and its fans, that shows that the good will always triumph over the evil in the world.  From a deep-reaching set list to a fiery performance by the band of that set list to top-notch production values, this recording boasts plenty of positives.  The whole of those elements makes this recording a concert that will keep audiences completely engaged from start to finish, not even realizing how much time has passed by the concert’s end.  It is that enjoyable.  Considering this, the whole of this recording makes the concert, once again, one of the year’s top new live recordings.  It will be available in stores and online Friday, Aug. 4.  more information on I Love You All The Time: Live at the Olympia Theatre is available online now along with all of Eagles of Death Metal’s latest news and more at:

More information on I Love You All The Time: Live at the Olympia in Paris and other titles from Eagle Rock Entertainment is available online now at: 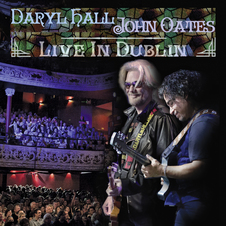 Eagle Rock Entertainment will release its second new live recording of the year this spring.

Officials with Eagle Rock Entertainment have announced that the label will release Daryl Hall & John Oates Live in Dublin this spring. The concert, originally recorded on July 15, 2014 at the Olympia Theatre in Dublin, is the duo’s first live recording in seven years. It will be released on Tuesday, March 31st on Blu-ray, DVD+2CD, and via digital formats. It marked the first time ever that the Hall of Fame inductees had performed in Dublin. The concert’s set list consists of fifteen songs from its four-decade plus career. It includes: ‘Sara Smile,’ ‘I Can’t Go For That (No Can Do),’ ‘Out Of Touch,’ ‘Kiss On My List,’ ‘Private Eyes,’ ‘Rich Girl,’ ‘Maneater’ and a number of others. The concert’s complete set list is noted below.

The concert’s DVD presentation includes an interview with Daryl Hall and John Oates as an added bonus feature.

Daryl Hall and John Oates is the number one selling duo in music history. The pair has to its collective name seven platinum albums, a number of gold records, and a lengthy list of hit singles including six U.S. #1 hits on the Billboard Hot 100.

More information on this and other releases from Eagle Rock Entertainment is available online at: