One in the Chamber debuted the video for its latest single over the weekend.

The band debuted the video for its new single ‘To The Gallows‘ Friday. The song and its video came more than seven months after the debut of the band’s then latest single, ‘Blow.’

The video for ‘To The Gallows’ features the band performing its new single in what is meant to reflect a live setting. The video was shot in black and white to help heighten the song’s impact and that of the visuals.

The musical arrangement featured in ‘To The Gallows’ presents something of a dark, contemplative vibe. It incorporates a touch of sludge rock and some grunge for a whole that stands as its own unique presentation comparable to few if any other acts.

The lyrical content that accompanies the song’s moody, brooding sense adds its own touch to the song. If the lyrics, provided with the video, are any indication, it seems to center on someone who is anything but good. The subject in question comes across as that seed, sleazy type who hides in the shadows.

‘To The Gallows’ is available to stream and download here.

More information on OITC’s latest single and video is available online now along with all of the band’s latest news and more at:

One in The Chamber released its latest single this month.

The band debuted the video for its new single ‘Blow‘ April 5.  The song’s musical  arrangement is a catchy blues-rock based arrangement whose foundation is formed through its solid guitar work.  Drummer Gerrod Harris, bassist Christian Dotto and front man Mike Biase add their own touch to the whole, which overall will keep listeners engaged and entertained.

The song’s lyrical content seems to center on a topic familiar to lots of listeners.  That is inferred as Biase sings in the song’s lead verse, “She rides the wave/Comes crashing down/her body grips the moonlight/I need to know what it takes to move in her/She fits me like a glove, so tight/Let it blow/Gotta breathe/Liquid love/Trying to hypnotize me/Feel the rush/Wanna scream/Hit it hard/Know you’ll never let it be.”  As the song enters its second verse, that seemingly obvious theme is made even more so as Biase sings, “She gets herself up so high/She likes to set the speed/I map the way with my eye/I can take care of all your needs.”  He adds in the song’s third verse, “And you burn what you break/As the lies overtake/All your mind/And you run.” 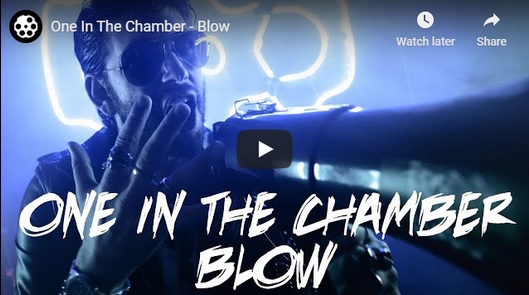 More information on OITC’s latest single and video is available online now along with all of the band’s latest news and more at:

Courtesy: One In The Chamber

One in The Chamber debuted its latest music video last week.

The band debuted the video for its new single ‘Itchin’ Back‘ March 21. The video for the almost five-minute bluesy-rock style song, directed by Diego del Rio, crosses footage of the band’s members performing the song in a rather tight space with front man Mike Biase trying to make his way through the day.

The band explained the purpose of the visualization in a recent interview.

“The video explores the often internal conflict between chasing one’s passion while balancing regular, conforming responsibilities,” the band noted in its collective statement. “It’s a juxtaposing collision that hits all aspiring musicians, but just like Bon Scott said, ‘It’s a long way to the top if you wanna rock & roll.’ There is a dangerous sense of liberation in being an artist; it’s a risk not all are willing to take.”

More information on One In The Chamber’s new video is available online now along with all of the band’s latest news and more at:

Courtesy: One In The Chamber

Independent rock outfit One in the Chamber is giving audiences the first preview of its forthcoming debut EP.

The video sees the band performing its new single in a dimly lit bar setting much to the pleasure of the audience.  The song can be streamed sans video online now here.

More information on ‘Bills To Pay’ is available online now along with all of One In The Chamber’s latest news and more at: