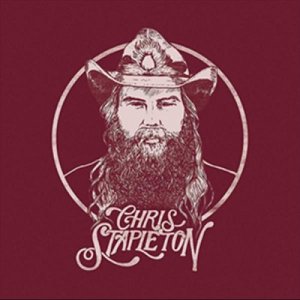 Country music, Americana, Bluegrass and Folk are some of the most closely related sounds out there today.  They are so closely related that it is easier to find acts from the noted genres on one radio station oftentimes than bands in the worlds of rock and metal.  It seems that there are much more finely defined lines in those two worlds even with their similarities.  Considering that the noted genres tend to be so close to one another, it is easier to group them all together in one list for the purpose of the year’s best new albums.  That having been noted, this critic’s list of the year’s top new albums from those realms is spread widely across each one.  Topping this year’s list of the best new country/bluegrass/Americana/Folk albums is Chris Stapleton’s latest offering, From A Room: Volume 2.  From start to finish, this record takes listeners back to the good old days of country while also touching on southern rock and even some blues.  That’s just the musical aspect of his latest album.  The lyrical content works expertly with each arrangement.  If you are a country, blues and southern rock fan but haven’t yet picked up this record, get it.  Period.  Also on this year’s list are new releases from North Carolina-based outfit Mipso, David Messier, Zakk Brown Band and others.  It runs the gamut.

As with every other list, this list features the year’s Top 10 new albums plus five additional honorable mention titles for a total of 15 albums.  Without any further ado, here for your consideration is the Phil’s Picks 2017 Top 10 New Country/Bluegrass/Americana/Folk Albums.

While the list above is this critic’s own list of the year’s top new records from the country/bluegrass/Americana/Folk realm.  There were certainly more albums than what’s listed here that deserve at least one listen including Lady Antebellum’s latest album Heartbreak, Luke Bryan’s What Makes You Country, Rascal Flatts’ This Is Us and so many others.  Keeping that in mind, there is plenty out there for fans of every noted genre within that universe.

Next up from Phil’s Picks are lots more lists to try to get to before the year lets out.  Lots to do and not enough time, so we’re going to step things up from here.  There are new Children’s albums, rock records, hard rock/metal, live recordings, and the DVD realm.  So there will likely be multiple lists from this point forward.  Stay tuned!

Imagine for a moment, southern rock fans, what would happen if a band took the easygoing influences of The Allman Brothers Band, crossed that with the slightly edgier sounds of Lynyrd Skynyrd and crossed that mix with more modern influences from the likes of Shooter Jennings, Blues Saraceno, and Brand New Sin (among other similar acts) and out them all together for one album?  The answer comes in the form of Outlaws & Moonshine’s debut full-length studio recording The Devil in the Moonshine.  Set to be released in stores and online next Friday, Nov. 24, this 10-song record boasts a kick that is just as strong as the most potent mason jar of moonshine.  That is evidenced in part through the album’s collective musical arrangements, which will be discussed shortly.  The album’s lyrical content is just as important to its whole as its musical arrangements.  It will be discussed later.  The record’s sequencing brings those aforementioned elements together, solidifying the album.  Each element is important in its own right in showing what makes The Devil in the Moonshine such a powerful debut for Outlaws & Moonshine. All things considered, this record proves to be a work that Southern rock fans of all ages will enjoy.

Outlaws & Moonshine’s debut full-length studio recording Devil in the Moonshine is a work that is certain to appeal to Southern rock fans of all ages.  That is due in no small part to the album’s collective musical arrangements.  As has been noted already, this album boasts a wide range of arrangements.  Right from the album’s outset, audiences get a work in the album’s title track that mixes influences of guitarist Blues Saraceno’s with those of Zakk Wylde’s Pride & Glory and Shooter Jennings.  The end result of that solid southern rock recipe is an infectious arrangement that is certain to become a favorite among audiences both on record and in live settings.  ‘(Here Comes) Bobby; the album’s second offering, slightly changes things with its driving, acoustic rock arrangement, which boasts a clear influence from Lynyrd Skynyrd and the Allman Brothers Band.  The album moves from those influences to something more akin to a cross between Kenny Wayne Shepherd and Brand New Sin as it makes its way into ‘Don’t Be Scared,’ the album’s third entry.  Things don’t let up from there.  The arrangement at the center of ‘Boom,’ which comes halfway through the album’s run, conjures thoughts of some of Black Stone Cherry’s more upbeat works while ‘Redneck Me,’ the album’s penultimate track, presents an arrangement that takes listeners back to the 80s.  That is of course just this critic’s own interpretation.  If that is not enough for listeners, there is plenty more hard-hitting southern rock throughout the course of the album’s other arrangements, half of which are also featured in the band’s 2015 debut EP 1919.  Considering those arrangements and the arrangements more directly noted here, it becomes clear why the album’s arrangements are so important to its overall presentation.  While purely southern rock at their heart, they present a wide range of influences that is certain to keep southern rock audiences of all ages engaged and entertained.  They are collectively only one of this album’s most important elements.  The song’s lyrical themes are just as important to its whole as its musical arrangements.

The lyrical themes presented throughout the album are important because of the variety in their messages and the fact that those messages are put out so clearly.  Front man Beau Van noted in a recent interview that the album’s opener/title track is a straight forward song about drinking.  He said of the song that “this is about the whole concept of ‘the devil made me do it.’ I’ve been bitten by this more than once, so I’m describing my ten-foot-tall and bullet-proof persona in the form of warnings from my pop – ‘That stuff turns you to the devil,’ he would warn me.”  The album takes a decidedly deeper turn in ‘Ride or Die,’ which Van noted is more of an introspective piece that looks optimistically forward on life while also looking back.  “This one was about putting your boots on one at a time, walking that country mile, and taking that deep breath when you realize you made it out alive,” Van said of this song’s lyrical theme.  ‘Hey Y’all’ is far lighter in its tribute to Van and company’s country roots.  That is obvious as van sings here, “Well I got people talkin’ ‘bout the way I’m talking/I’m city boy livin’, but I’m country boy walkin,’…I’m Waylon Jennings, Johnny Cash/You can kiss my outlaw a**…’scuse me while I whip out my hey y’all.  This song is just as certain as any of the album’s other songs to become a fan favorite if only for its concrete solid, country proud lyrical theme.  When that theme is set alongside the song’s raucous and infectious musical arrangement, the end result is one of the album’s absolute best numbers.  When that whole is joined with the lyrical themes noted in the other discussed songs — and those not directly noted here — the whole of the themes shows clearly why the album’s lyrical content is just as important to its whole as its musical arrangements.  Those themes are collectively still not the last of the album’s key elements.  Its sequencing rounds out its most important elements.

The sequencing at the center of The Devil in the Moonshine rounds out the most important of the album’s elements.  It is so important because it shows a lot of time and thought was put into ensuring listeners’ maintained engagement in this album.  The album starts loud and proud with its title track, but very quickly pulls back in the emotional family tribute ‘(Here Comes) Bobby.’  That reservation doesn’t last long as the album’s energy picks right back up in ‘Don’t Be Scared’ before pulling back just a little again in the introspective mid-tempo ‘Ride or Die.’  Yet again, that reservation only lasts so before picking right back up again in ‘Boom,’ which is about that certain woman that makes every man move.  This time around, the energy stays relatively solid right up until ‘Redneck Me,’ which drives, but is still slightly more reserved in its energy than its predecessors.  ‘Different Kind of Man’ takes the energy present in ‘Redneck Me’ and builds on it just enough to help the album end with the same energy with which it opened almost 40 minutes ago at its start.  That balance of energy from one song to the next goes a long way toward ensuring audiences’ engagement.  It shows that those charged with the record’s sequencing didn’t just throw the songs in randomly and hoped they stuck, but rather deliberately set the album’s order.  That consideration paid off greatly, too. The same can be said of the thought obviously put into the album’s sequencing in regards to its lyrical themes.  The album’s lyrical themes vary from one to the next, giving just as much for audiences to enjoy.  Considering all of this along with the value of those lyrical themes themselves and the musical arrangements, the album in whole proves to be a solid first full effort from Outlaws & Moonshine – a work that is certain to appeal to southern rock fans of all types and ages.

Outlaws & Moonshine’s debut album The Devil in the Moonshine is a solid record that boasts a kick that is just as strong as the most potent home-brewed mason jar of moonshine.  It is a record that is certain to appeal to southern rock fans of all types and ages.  As has been noted here, that is due in no small part to the variety presented in the songs’ musical arrangements.  The arrangements boast a variety of energies and influences.  The songs’ lyrical themes are just as varied as its musical arrangements, presenting stories of family loyalty, facing life optimistically, and even the positive impacts of that certain significant other among other topics.  When this is all considered along with the albums sequencing – the order in which it was all placed – the whole of this record becomes a work that is solid from start to finish.  It will be available to the masses next Friday, Nov. 24 via Nemesis Records/Vanity Music Group.  More information on The Devil in the Moonshine is available online now along with all of Outlaws & Moonshine’s latest news and more at:

Outlaws & Moonshine is giving audiences a preview of its latest album.

Front man Beau Van talked about the song in a recent interview, saying that lyrically it leaves little doubt about its subject matter.

“Well, the inspiration for the song is … remember when you were a kid and you put toothpicks in cinnamon and sucked on them?  Well, now I mix ¼ pure moonshine – not the store-bought crap – with ¾ Fireball and that’s my Devil,” Van said with a laugh.  “As for the song, there’s no mystery there, it’s just a damn good drinking song.”

‘Devil in the Moonshine’ is the debut for the band’s newest member, steel guitarist Travis K, who lead guitarist Mike Back referred to as “an accomplished slide player and with a great ear who teaches guitar on the side.  He tends to be the quiet one of the band, but, his slick slide guitar give our music more of that southern core.”