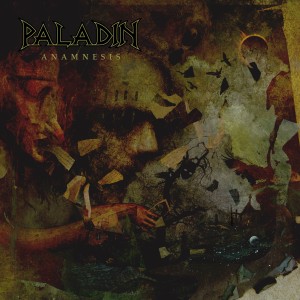 Up-and-coming metal band Paladin announced a new slate of live dates Thursday.  The almost three-week schedule, which launches April 22 in Charlotte, NC and runs through May 9 in Raleigh, NC, is in support of the band’s 2019 debut album Ascension and its follow-up, the three-song EP Anamnesis.  The latter of those two records was a tribute to Nevermore and its late front man Warrell Dane.  The record was released Dec. 13, on the second anniversary of Dane’s untimely passing.  Anamnesis is another good exhibition of the talents of Paladin’s members while also serving as a reminder of why Nevermore is still one of metal’s most important bands even though the band is not longer together.  That statement is supported through the EP’s featured songs.  This will be discussed shortly.  The songs that Paladin chose are themselves good choices and representations of what made (and still makes) Nevermore an elite metal act.  Paladin’s performance of the songs adds even more engagement and entertainment value to the EP.  This will be addressed a little later.  The record’s production rounds out its most notable elements.  When it is considered alongside the songs featured in the EP, the whole of the record is a good tribute to Nevermore and another good example of why Paladin is one of the next big names in the hard rock and metal community.

Paladin’s new EP Anamnesis is a positive new offering from the up-and-coming metal outfit.  The group’s second studio recording, whose title means a recalling of mind, was released Dec. 13 as a tribute to Nevermore’s late front man Warrel Dane on the second anniversary of Dane’s passing.  The three-song compilation succeeds in paying tribute to Dane and Nevermore and in showing Paladin’s promise all in one.  That is due in large part to the songs that are featured in the record.  Paladin reaches as far back as Nevermore’s 1996 sophomore album The Politics of Ecstasy and as recent as the band’s 2005 album This Godless Endeavour, which would go on to become the band’s penultimate album.  The band’s fourth album Dead Heart in a Dead World is also represented in the EP.  The musical and lyrical content featured in each song builds on the engagement and entertainment generated just through the songs.  ‘Final Product’ for instance takes on the slow demise of society, taking on the impact of the media on that decline.  ‘42147’ meanwhile finds Worrell seemingly addressing his own conflicted thoughts about an unknown topic.  This, perhaps, could be a discussion on mental health.  If so, despite its brevity, it is a powerful statement in its own right.  ‘The River Dragon Comes’ is powerful in its own undeniable way, with Dane seemingly presenting a sociopolitical commentary in the song’s lyrical content.

The musical arrangement featured within each of the EP’s songs works with the songs’ lyrical content.  Case in point is the arrangement at the center of ‘Final Product.’  The arrangement is a high-energy work that does well to illustrate the frustration at what has become of the world and the causes of what has happened.  The subtleties in the arrangement within ‘The River Dragon Has Come’ serve to paint a vivid picture alongside the song’s almost biblical style lyrical content.  The coupling of those elements makes the song a powerful work in its own right.  ‘42147’ boasts a certain energy in its musical arrangement that does just as well to illustrate the inner turmoil that the song’s subject is enduring in that song.  Simply put, the arrangements at the center of each featured songs, and their companion lyrical content go a long way to show why Nevermore was (and still is) so respected within the metal and hard rock community, and why Paladin, in its cover of each song, has great promise in its own right.  The band’s performance of each featured song shows even more why Paladin has great promise for the future.

The performance that Paladin’s members display in each of the covers in its new EP does its own share to show what makes the band a promising new name in the metal community.  From start to end, the band stays true to the songs’ source material in each song while also displaying its own talents.  Front man Taylor Washington does not try to copy Dane’s delivery style, rather using his own distinct style and sound while he and fellow guitarist Alex Parra’s dual guitar approach takes Nevermore’s arrangements and gives them a whole new life without changing the songs at all.  Drummer Nathan McKinney and bassist Andy McGraw round out the arrangements, showing their expertise just as much as their band mates throughout each song.  The end result is a collection of songs that is just as enjoyable for its performances as it is for the songs themselves.  Of course, as much as the songs and their performances do for the whole of Anamnesis, they are not the record’s only important elements.  The EP’s production plays its own important part to the record’s presentation.

The production of this record is as noteworthy as the songs and their performance in that said work ensured each part of each arrangement was balanced expertly with one another.  Listeners will be glad to know that at no point in the record’s body does one line overpower the others.  That is evident partially in the “softer” brooding moments of ‘The River Dragon Has Come.’  Washington’s vocals are right in line with the guitars, ensuring each part is heard fully.  As the song progresses into its heavier moments, McKinney’s drumming and McGraw’s bass line add their own strength to the song’s whole, again thanks to the work of those behind the glass.  The musicians’ work is just as well-balanced through the much heavier ‘42147’ and ‘Final Product,’ making the record that much more engaging for listeners.  McGraw’s bass line, McKinney’s drums and Washington’s bass are balanced precisely with Parra’s guitar line in ‘42147’ to make the song in whole a tribute to Nevermore that fans of both bands will fully appreciate.  Much the same can be said of the production (and mixing) of each part in the band’s cover of ‘Final Product.’  Taking all of this into consideration, it becomes clear why the production behind each of the songs featured in Anamnesis is just as important to the record’s presentation as the songs themselves and the performances thereof.  All things considered, each noted element makes Anamnesis a strong follow-up to Paladin’s debut album and more proof of Paladin’s promise for the future while also being a fitting tribute to one of the great metal acts that preceded Paladin.

Paladin’s recently released EP Anamnesis is a strong new effort from a band that is certain to be one of the next big names in the metal community, given the right support.  As noted here, that is due to the songs featured in this three-song, the performances thereof and the production of each recording.  Each item noted is key in its own way to the whole of the EP’s presentation.  All things considered, they make Anamnesis a nice tribute to Nevermore and an equally strong presentation of Paladin’s possible future.  Audiences might be able to hear the songs featured in Anamnesis on Paladin’s upcoming live dates, which are noted below.

More information on Paladin’s upcoming live dates is available online now along with all of the band’s latest news and more at: