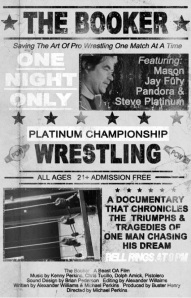 Professional wrestling is one of the biggest businesses in the world today. From America to Mexico and all the way to Japan, professional wrestling brings in millions of fans and dollars every year. This is despite the reputation that it still bears even now in the twenty-first century. Most of that business is brought in by the powerhouse that is World Wrestling Entertainment. However, WWE is not the only wrestling brand out there. Any number of tiny indie brands exists throughout the world. In the brand new documentary The Booker: Saving The Art of Pro Wrestling One Match at a Time, audiences will see the fight of just one brand to try and make a name for itself in the huge market that is pro wrestling. It has already been noted that there is still a stigma attached to pro wrestling and its legions of fans. So why watch this documentary? The first reason that anyone should take the time to watch this documentary is that in watching it, they will see that it isn’t just a documentary about wrestling. It’s a documentary about a business. Secondly, audiences will see just how hard hopeful wrestlers work especially at the indie ranks. Lastly, audiences will see just how hard hopeful promoters (one in particular in this case) work to get their brands off the ground. All of this taken into consideration, audiences that give The Booker a chance will see what makes both this documentary and pro wrestling as an art so important.

The Booker: Saving The Art of Pro Wrestling One Match at a Time is a surprisingly interesting documentary for what it is. On the surface, it’s a documentary about an indie wrestling brand trying to make a name for itself in the multi-million dollar world of pro-wrestling.  On a much deeper level though, audiences get a much more in-depth story in the course of the documentary’s run time.  It clocks in at just above the ninety-minute mark.  That in itself is another positive to the overall presentation on a side note.   Getting back on topic, audiences get a story here about a business trying to get off the ground; a traveling theater group even as one interviewee reveals he has come to learn. It could be argued that it is just one of so many models of a small business just trying to get its foot in the door. Viewers see the struggles and hurdles that have to be overcome by the business’s head in order to try and get the business above water. If audiences can take in the documentary from this angle, they will see that pro-wrestling is more than just pro-wrestling.  It is a business and a way of life for so many.  Speaking of a way of life, audiences will take away a new appreciation not just for pro wrestling in watching this documentary, but also for those that make it their life.

Audiences will have a new appreciation not just for pro wrestling in watching The Booker.  They will also gain a new respect for those that make pro wrestling their life.  Audiences will see that for those trying to make a name for themselves in the business, life isn’t easy.  Many, if not all, upstart wrestling hopefuls have to balance being on the road doing shows with their regular workaday lives.  And many of those workaday lives are quite mundane to say the least.  The juxtaposition of the two lives is itself intriguing.  To top it off, many of these people also have families.  That’s one more factor that many hopefuls have to consider.  As is shown here, all of these considerations have led to some casualties.  Some of those hopefuls admit in interviews that they simply couldn’t try to balance it all and chose a normal life.  In an odd way, it’s heartbreaking to see those struggles and casualties.  It makes the entire feature all the more worth the watch.

The struggles of those trying to balance their everyday lives with their in-ring lives is just one part of the human drama that makes The Booker such a surprisingly interesting story.  Just as interesting to behold are the emotional struggles of PCW’s head Paul Scarborough/Paul Platinum.  Scarborough is so dedicated to getting his brand off the ground.  And it shows both when he is working with his wrestling hopefuls and when he is by himself.  It presents a man who is not just a wrestling head or promoter but a struggling businessman trying to make his business work.  At times, viewers will feel for Scarborough.  At others, they might yell at him.  One of those points comes when Scarborough tells his wrestlers that their success or failure at a particular show means whether or not he and his wife would have to take out a second mortgage on their home.  That was rather harsh.  And he could have taken another route to motivate them.  But one can really see his desperation to get the best out of his team.  Taking that into consideration, it will have viewers feeling for Scarborough even more.  It shows again how dedicated he is to what he’s doing.  That dedication ties in with the dedication of PCW’s wrestlers and the very premise of this documentary to make The Booker a piece that both those inside and outside the world of pro wrestling will appreciate after having watched it.  Outsiders will hopefully gain a new respect for the business and those trying to make it in the business, too. Insiders will hopefully smile at the very real portrayal of the lives of those in the business.  It shows in the long run that pro wrestling isn’t just a hobby.  And it deserves far more respect than it gets today from outsiders.  The documentary is available now on DVD.  More information on The Booker is available online at http://www.facebook.com/pages/The-Booker/301962783176574.  To keep up with the latest sports and entertainment reviews and news, go online to http://www.facebook.com/philspicks and “Like” it.  Fans can always keep up with the latest sports and entertainment reviews and news in the Phil’s Picks blog at https://philspicks.wordpress.com.