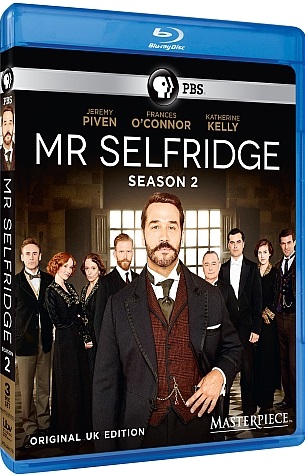 ITV Studios’ hugely popular series Mr. Selfridge just wrapped its second season across the pond. And it just started here on Masterpiece yesterday. In coordination of the U.S. debut of Season 2, ITV Studios and Masterpiece have partnered to release Season Two on Blu-ray and DVD this Spring.

Mr. Selfridge Season Two will be released to the masses on Blu-ray and DVD April 29th. The series, starring Jeremy Piven (Entourage, PCU) follows the famed businessman that changed the face of business in London in the early twentieth century and his business, Selfridge & Co. Season Two of Mr. Selfridge runs a total of 7.5 hours over three discs and features the original U.K. edition of Season Two. Frances O’Conner (Madame Bovary) returns for Season Two in the role of Harry Selfridge’s wife Rose as does Aisling Loftus (Page Eight) as Agnes Towler. Also back for Season Two are: Amanda Abbington (Sherlock Season 3) as Miss Mardle, and Ron Cook (Little Dorrit) as Mr. Crabb.
There is sure to be more drama for Harry Selfridge in Season Two as Katherine Kelly (Coronation Street) returns once again as Lady Mae. Gregory Fitoussi (World War Z) is back, too as Henri LeClair. Samuel West (Any Human Heart) reprises his role as enterprising journalist Frank Edwards. Selfrdige’s personnel director Mr. Grove is once more played by Tom Goodman-Hill (Downton Abbey). And Trystan Gravelle (Anonymous) also returns again as the dashing manager of Selfridge’s Palm Court Restaurant, Victor Colleano.

Season Two of Mr. Selfridge opens in the Spring of 1914. The store is now celebrating its fifth anniversary. There have been lots of changes at Selfridge & Co. in terms of staff. Harry’s wife Rose has even inexplicably returned to London after having left Harry to return to America at the end of Season One. There are sure to be even more changes as the shadow of World War I looms over London.

More information on Mr. Selfridge Season Two and the series in general is available online at https://www.facebook.com/masterpiecepbs, http://twitter.com/masterpiecepbs, and http://www.pbs.org/wgbh/masterpiece. It can be pre-ordered now via the PBS online store at http://www.shoppbs.org/product/index.jsp?productId=32224996&cp=3529703.20384186&ab=Aspot_Selfridge_3.30.14&parentPage=family.