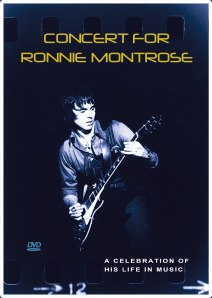 2013 has seen quite the surplus of live concert recordings.  Bands the likes of Jane’s Addiction, The Rolling Stones, Black Sabbath and so many others have been released to the masses.  Each of those live recordings has proven to be exceptional in its own way.  These recordings will be seen by countless audiences thanks to being released via some of the music industry’s biggest labels. It doesn’t mean that they’re the only live recordings to hit the market this year.  One independently recorded and released live concert event that deserves just as much coverage as those aforementioned recordings is the Concert for Ronnie Montrose.  Recorded April 27th, 2012 at the Regency Ballroom in San Francisco, California, this live concert event will impress anyone that is a fan of true, pure, guitar-driven rock and roll.  This applies to even those that might not be so familiar with the work of Ronnie Montrose.  There is much to like about this new live recording.  The most obvious of factors is the concert’s audio and video mix.  For a show that was independently recorded and released, it looks and sounds surprisingly good.  The show’s set list and guest lineup collectively make up another of the reasons to check out this concert.  And while it is something relatively subtle, those charged with finalizing the concert included names and titles for each artist on each song.  For those that might be unfamiliar with the artists, this inclusion will help to introduce the artists to said new audiences when they look up each name.  In turn, it could open audiences’ eyes and ears to a whole new world of music.  Together with the aforementioned factors, the Concert For Ronnie Montrose proves to be just as enjoyable as any live recording released by the industry’s major labels.

The Concert for Ronnie Montrose is an independently recorded and released live concert event.  The automatic thought that might be raised in some audiences’ minds upon reading this is that it probably doesn’t match up with the live recordings released by the record industry’s major labels.  That belief could not be any more wrong.  The reality of this concert recording is that it looks and sounds just as good as any of the countless other live recordings released on said labels already in 2013. The camera crews charged with capturing the concert expertly carried out their duties.  Home viewers get the best seat in the house.  They are taken right on stage with the musicians and even above the crowd to see the full extent of the audience in attendance.  Seeing how packed the house was on the night of April 27th, 2012 just goes to show that while Ronnie Montrose might never have been one of the biggest names in the industry, he was and still is one of the most respected individuals to pick up a guitar. It is truly a telling statement, and one that any Ronnie Montrose fan will appreciate when they watch this concert for themselves.

The Concert for Ronnie Montrose was captured just as expertly on video as any live recording released via the industry’s major labels.  It is crystal clear.  And the camera work itself is just as impressive.  Having examined the recording’s high-quality video, the next logical step is to examine its audio mix.  Having been recorded in the semi-intimate setting of San Francisco’s Regency Ballroom, it goes without saying that it was extremely important that the audio be perfect.  Those that are more familiar with the science of acoustics will appreciate the painstaking efforts taken to ensure that the concert’s sound was on par with any major live recording.     Not one of the guitarists overpowered the other at any point throughout the evening.  And none of the musicians overpowered their fellow guest vocalists, either.  That set alongside the equally top notch camera work and video editing serve as the foundation for a concert recording that proves in the long run to be just as good as any of the year’s major concert recordings.

The audio and video mixes in the Concert for Ronnie Montrose collectively make for a solid foundation for this recording.  Having examined both, the next logical step in examining the presentation is to look at the collective set list and the guest lineup.  The set list that comprises this tribute concert spans the late guitarist’s rich career before his passing.  From his days with the Edgar Winter Group to his work with the band that bore his name to his solo career, this concert is front loaded with more than its share of great music.  Even audiences that might perhaps be less familiar with Montrose’s work will likely recognize the Edgar Winter Group’s hit songs ‘Frankenstein’ and ‘Free Ride’ and the cover of The Rolling Stones’ ‘Connection.’  What’s more, those that might be fans of Dream Theater will hear quite the similarity between the concert’s opener, ‘Overture’ and certain work by Dream Theater guitarist John Petrucci on the first of Liquid Tension Experiment’s two records.  Petrucci wasn’t one of the artists on hand at the Concert for Ronnie Montrose.  However, some equally big names were in attendance. And their presence is sure to impress audiences just as much as the show’s set list.

The lineup of artists on hand to pay tribute to Ronnie Montrose is just as eye-opening as the show’s set list.  Classic rock fans will recognize former Journey band mates Steve Smith and Neal Schon and Tesla front man Jeff Keith.  Also on hand were two equally big names in the form of Montrose’s former band mate and friend Sammy Hagar (Montrose, Van Halen, Chickenfoot) and world renowned guitarist Joe Satriani (Chickenfoot).  Hagar and Montrose’s fellow former band mates were on hand for the concert, too.  Anyone that was a fan of the band in its heyday will appreciate seeing its members back together if only for a one off show.  If the set list that makes up the show isn’t enough for audiences, then this megastar lineup of artists is certain to convince audiences to check out this recording.

So much has already been noted as to what makes the Concert for Ronnie Montrose such a joy of a live recording, even having been recorded and released independently.  There is still one factor in the recording to examine.  It is a subtle, yet important factor to examine.  It is the inclusion of what is called “supers” (or superimposed images) highlighting the names and titles of each musician to take the stage throughout the concert.  Their inclusion is important for those that might happen to be new to each musician.  The names and titles are placed right in front of each musician.  This allows audiences to directly link a name with a face.  Audiences that are less familiar with said artists can in turn link the names and faces when looking up information on each one online or otherwise.  The latent effect of all of this is the potential introduction of a whole new world of music to new audiences.  For that alone, those charged with making sure the supers matched with each artist deserve their own round of applause.  And together with the camera crews, sound editors, and performers themselves, it all comes together to make the Concert for Ronnie Montrose a concert that any purist rock and roll fan will appreciate no less with each watch.  It is available now and can be ordered online at http://www.ronniemontrose.com/merchandise/index.php?main_page=product_info&cPath=65&products_id=238.  More information on this and all things Ronnie Montrose is available via the official Ronnie Montrose website, http://www.ronniemontrose.com.  To keep up with the latest sports and entertainment reviews and news, go online to http://www.facebook.com/philspicks and “Like” it.  Fans can always keep up with the latest sports and entertainment reviews and news in the Phil’s Picks blog at https://philspicks.wordpress.com.