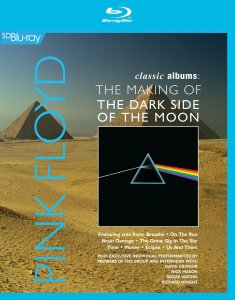 The Dark Side of the Moon is one of the most iconic albums of not only the 20th century but of all time. This record is one of those pieces that even decades after its original release continues to influence a whole new generation of music lovers and musicians alike. The reasons for this are varied. Whether one asks the average listener, music historian, or educator, each will have his or her own reasons for including The Dark Side of the Moon on their list of the best records of all time. Now thanks to Eagle Rock Entertainment, audiences from every walk of life will get an even more in depth evaluation of the album’s importance in the release in Pink Floyd: The Making of The Dark Side of the Moon. Audiences are taken song by song through an explanation of the album’s creation from Pink Floyd’s members. The explanations from the band members comprise one reason that audiences will appreciate this latest Pink Floyd documentary from Eagle Rock. Audiences will also enjoy learning from those behind the glass how the various tracks came to life. In simpler terms, audiences learn through this documentary how various tracks were produced and mixed. It offers an extra vantage point, adding to the depth of both the album and the documentary. The history behind the album and its production are both valuable additions to the presentation in while. The finishing touch to the presentation is its bonus material. Eagle Rock has included as bonus material on this presentation, even more discussions on the album’s songs that didn’t make the primary feature. Those extra discussions along with the primary discussions make the presentation a whole that any Pink Floyd fan and any classic rock fan will appreciate.

Much has been written and spoken of The Dark Side of the Moon. The album, which is to many the band’s most iconic album, has been evaluated time and again by everyone from average listener to academic. Each has found one reason or another behind the album’s continued importance to this day. Now thanks to Eagle Rock Entertainment, the members of Pink Floyd—Roger Waters, David Gilmour, Nick Mason and Richard Wright—give audiences perhaps the most in depth explanation ever of the album’s importance through this new documentary. The men explain track by track what inspired each song, and how each song sprung to life. From discussions on how ‘Time’ and ‘Money came to be to Syd Barrett’s death influenced another track and more, each explanation gives each song (and the album as a whole) even more importance and emotion. The “in-studio performances” by Gilmour and Waters help to illustrate and heighten the discussions in question. To add to it, audiences get some on the spot musical moments of sorts as a result. Those musical moments essentially serve to help viewers get a better grasp of the songs in question. And those moments succeed at their goals, too.

The explanations and stories offered with each of the album’s songs by Pink Floyd’s members create so much depth behind the album. Just as much depth and substance is added to the album through the discussions from those behind the glass. Anyone that has any interest in music production will appreciate the discussions on how the songs were produced, engineered and mixed. Audiences see on that side of the glass with songs such as ‘Money’, ‘Time’ and others how each one was layered. Audiences will see how certain sounds were created through sound effects mixing and how certain guitar riffs came to be the basis for others. What’s incredible about all of this is seeing just how much technology was available for bands to utilize even at that point in time. And engineer Alan Parsons utilized as much of that technology as possible. Such understanding makes this documentary all the more important for fans of Pink Floyd. It gives an angle rarely seen or heard when it comes to any music documentary. And it serves to show just how intricate the album was and how much work went in to making the album a reality.

Both the stories from the band and the technical discussions from Alan Parsons work together to make Pink Floyd: The Making of The Dark Side of the Moon an important addition to the library of any Pink Floyd fan. The added discussions included as bonus features collectively put this documentary over the top. On one level, they could be compared to perhaps deleted scenes on a DVD that ended up on the cutting room floor. Audiences learn extra little bits of information such as the social commentary that is meant to be interpreted in ‘Money.’ There are also discussions by Waters on his personal world view and how it led to much of the album’s rather grim lyrics as well as much more for audiences to take in. These additional stories along with those shared in the documentary’s main feature and the technical discussions make Pink Floyd: The Making of The Dark Side of the Moon all the more valuable an addition to any Pink Floyd fan’s home library.

The annual Texas Kickoff has a new name that will debut beginning with this season.  Thanks to a new partnership between ESPN Regional Television and Advocare International, LP, it will now be known as the Advocare Texas Kickoff.  It will be featured on Labor Day weekend at Reliant Stadium in Houston and will be held in cooperation with Lone Star Sports and Entertainment (LSSE).  The inaugural game of the newly named kickoff show will feature a match-up of Mississippi State and Oklahoma State.  The game is schedule to be played Saturday, August 31st on ABC and ESPN2.  Kickoff is scheduled for 3:30pm/2:30pm CT.

Advocare President and CEO Richard Wright and ESPN Regional TV Senior Director of Events Clint Overby both shared their thoughts on the new partnership in recent interviews.  Both expressed optimistic feelings about what the partnership has to bring for both organizations.  “The AdvoCare Texas Kickoff will be an exciting way to start another college football season,” said Overby.  “AdvoCare is a Texas company and the opportunity to support college football in their home state was a natural fit.”  Wright shared Overby’s outlook.  “AdvoCare has always been a strong supporter of college football and this partnership gives us an opportunity to share our brand with the consumer,” he said.  “We immediately knew this was an event AdvoCare needed to support and we look forward to presenting more exciting matchups in the years to come.”

More information on the Advocare Texas Kickoff and other college football related news is available online at http://espnplus.com/home/, https://www.facebook.com/ESPNEvents and https://twitter.com/ESPNEvents.

Pink Floyd’s album, “Wish You Were Here” is considered by many to be one of the band’s most iconind recordings, next to its predecessor, “Dark Side of The Moon.”  That record was received to praise from critics and fans alike.  Now, when a band releases any album that’s considered landmark, it’s always a tough call on how to follow up such success.  And as with any other band, the road to creating a successful followup was not an easy one for Pink Floyd.  Thanks to Eagle Rock Entertainment, Eagle Vision and director John Edginton, fans of Pink Floyd flinally get to hear from the band members themselves just what went into making this amazing opus.

The documentary opens and closes with the band members discussing former guitarist Syd Barrett.  It opens with the song, ‘Shine on You Crazy Diamond’, which was about Barrett, according to Roger Waters.  It was a tribute of sorts.  He and David Gilmour discuss how the pair really fought over the song, and whether it would mean the inclusion or not of two other new songs that the band had written.  That, apparently, is how “Wish You Were Here” started.  It started with just four notes.  From there, the band members go into discussions on each one of the album’s songs.  They go from ‘Set The Controls For The Heart of The Sun’, to the protest against record labels in ‘Cigar’ all the way to the eery sounds of ‘Welcome To The Machine.’  All the while, including their own personal stories of recording the album.

The band members aren’t the only stars of this new documentary.  Brian Humphries, who originally served as recoding engineer on the record, is featured throughout the documentary.  Humphries offers his own take on how each track was constructed, piece by piece.  For those who are interested in audio production, this is an invaluable addition to the album’s story.  He explains to audiences about little nuances that went into each song that brought them to life.  Humphries is joined by the man behind the album’s cover design, Storm Thorgerson.  Fans will love his note about how he had no training in graphic arts, and didn’t like this or that.  So he ended up coming up with the “Burning Man” cover in the end.  That in itself is worthy of its own discussion.

The actual feature documentary presented here clocks in at just under an hour long.  However, there are an additional twenty-five minutes of never before seen footage that serve as bonus features.  Fans will get to hear Roger Waters and David Gilmour playing a full acoustic version of the album’s title track, as well as even more in depth interviews that didn’t make the main feature.  All combined together, they make for an excellent look at what is perhaps not just one of the greatest records from Pink Floyd, but also one of the greatest records ever created, period.