Split Second Meltdown, the brainchild of singer-songwriter Rob Clores, debuted the video for its new single this week.

The group debuted the video for its new single ‘Nobody Left But Me’ Friday at allthatshreds.com.  The song is the second song from Split Second Meltdown’s debut self-titled record.  Clores debuted the record’s lead single, ”Flesh and Blood‘ in July.

The musical arrangement featured in the song is a straight-forward, guitar-driven work that takes listeners back to the rock sounds of the early 90s.  According to information posted to allthatshreds.com, the song’s lyrical theme focuses on the issue of immigration. 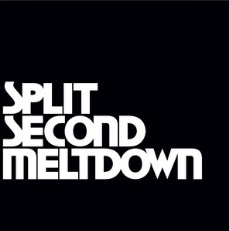 Independent singer-songwriter Rob Clores released the debut self-titled EP from his new project Split Second Meltdown last month.  The five-song record is an interesting pure guitar rock presentation that fans of the genre will agree is worth at least one listen.  That is thanks to the record’s musical and lyrical content together.  The EP’s opener/lead single ‘Flesh & Blood’ serves well to support the noted statements.  It is just one of the songs that serves that purpose here.  The aptly titled ‘Heavy Song’ supports the noted statements in its own way.  It will be discussed a little later.  ‘The End Of Your World,’ the EP’s closer is one more way in which the EP shows its strength.  It will be addressed later, too.  All three songs noted here are crucial in their own way to the whole of Split Second Meltdown.  When they are considered along with the EP’s other two songs, the whole of the EP becomes a presentation that again, Clores’ fans and rock fans in general will agree is worth hearing at least once

Split Second Meltdown, the self-titled debut EP from Rob Clores’ eponymous new project, is a project that is well worth hearing at least once.  That is thanks to the record’s musical and lyrical content combined.  The EP’s opener/lead single is just one of the songs that serves to support the noted statements.  The song’s musical arrangement is a mid-tempo, blues-rock composition that lends itself to comparisons to early Stone Temple Pilots works.  That comparison is made in part through the guitars, which use a familiar string bend or pedal effect, and which use the noted stylistic approach.  Clores’ own vocal delivery couples with that element, the bass line and drums to make the song a work that throws back to STP circa 1994, when the band released its breakthrough album Purple.  That infectious musical arrangement is just one part of what makes the song work as well as it does.  Its lyrical theme plays into its general  effect, too.

Clores sings in the song’s lead verse, “Woke up feeling kinda sick today/My head is pounding/It won’t go away/Didn’t even have a drink last night/My instinct tells me something isn’t right.”  He continues in the song’s second verse, “Cup of coffee didn’t do no good/Can’t see the doctor ‘cause I’m un-insured/I hope the virus didn’t come my way/I think about it almost every day/Yeah/I wish it would all go away/Before it’s too late/Yeah, I hope I survive another day/I’m only flesh and blood.”  He adds in the song’s third verse, “Imagination has me running scared/I don’t think I’m very well-prepared/Keep watching so-called experts on the news/Got me feeling more and more confused/I have delusions that I’m gonna die/I see the future and try not to cry/New York City is the place to be/Except when there’s a killer that you can’t see.”  This is all a response to everything going on in the world.  From the mention of the “killer that you can’t see” to the mention of the emotional impact of watching the so-called experts, it voices everything that so many people are feeling and thinking as a result of the COVID-19 pandemic.  The tone in the arrangement and its feeling does well to help illustrate the message.  All things considered, that message and the song’s musical arrangement make ‘Flesh and Blood’ a strong example of why this record deserves to be heard.  It is just one of the EP’s most notable entries, too.  The aptly titled ‘Heavy Song’ does its own share to make the record stand out.

‘Heavy Song’ is just that.  It is a heavy song at least musically speaking.  The guitar, bass and drums create a sort of doom metal sound together.  When Clores’ vocal delivery ,which conjures thoughts of the late, great Alice in Chains’ front man Layne Staley, is joined with that instrumentation, the end result is a musical work that hits hard in its own right.  Interestingly enough, the addition of the keyboards and guitar solo in the bridge changes things up, making for more of a comparison to say, Deep Purple.  It sounds like quite the odd mix, but it works here in a strange way.  It is certain to generate lots of engagement and entertainment for listeners.  It’s just one way in which the song shows its importance to the EP.  Its lyrical theme adds even more to its presentation.

Not having a lyrics sheet to reference, some of the lyrics here are difficult to decipher.  From what can be deciphered, the song comes across as presenting a decidedly introspective message.  Clores notes in the song’s lead verse, “When I die/I’ll know the reason why/I won’t let it get to me/’Cause I know in my heart/Can’t let it get to me.” Much as with the song’s early lyrical content, the lyrical content in the song’s chorus hints at repeating the previous message about not letting something get to a person.  Again, what can be inferred here is that this song’s subject is someone who is perhaps looking at things that have happened in life, and perhaps come to terms with it all.  That might be why the song goes from the heavy, brooding sound of its first half to its more energetic, upbeat arrangement in its second half.  Again, this is all a matter of interpretation.  Hopefully this critic’s interpretation is close to being correct if not spot on.  Regardless, the song’s lyrical content and musical content combined make the song another strong entry for Split Second Meltdown.  It is just one more of the EP’s most notable works.  The record’s finale, ‘The End Of Your World’ brings even more interest to the presentation.

‘The End Of Your World’ stands out in part because of its own musical arrangement, which stands starkly against the rest of the record’s works.  The brooding piano line, subtle cello line and vocals that open the song conjure thoughts of works from Shooter Jennings’ 2010 album Black Ribbons.  As the song progresses, it developed more of a mainstream sound alongside the noted foundation.  The guitar solo and keyboards featured in the song’s bridge collectively bring about a kind of progressive metal sound a la Dream Theater.  The whole sounds like a rather interesting mix.  It is, too, but in a positive fashion.  It brings each influence together for a whole that makes this arrangement just as solid of a finale for the EP as its lead single is for an opener.  When this unique amalgam of influences is examined alongside the song’s lyrical theme, the whole of the song stands out even more.

Speaking of the song’s lyrical theme, it creates its own interest.  Clores sings in the song’s lead verse introspectively, “Why did it have to end this way/A…life just thrown away/Where was the will to live/That greets us day to day/Why did it have to end this way?/You must have known how much you were loved/A gift of God from up above/Where was the thought of the ones you’d leave behind/It didn’t have to end this way/How does it feel to be/How would it feel to be/How does it feel at the end of your world?/A million people walk above/Would it be better/To be old and fade away/Why did it have to end this way?”  This is clearly some very heavy material.  A quick glance would seem to infer that this song’s lyrical content focuses on someone dealing with the aftermath of a friend of loved one’s suicide.  That might even explain why the song ends as abruptly as it does, musically.  It almost is as if that abrupt ending is that accent that illustrates how quickly that noted life ends.  The subtlety in the lyrics adds even more impact to the song’s impact.  It would have been easy for the song’s subject to go over the top here, but he/she didn’t.  Because of that, the impact is so powerful.  That so many people can relate to this situation adds even more impact to the song and its lyrical theme.  Keeping all of this in mind, there is no doubt left about why this song is so important to the whole of Split Second Meltdown.  When it is considered along with the other songs noted here and the EP’s other two songs not directly addressed, the whole makes Split Second Meltdown unquestionably, a record that is well worth hearing at least once if not more.

Split Second Meltdown, the self-titled debut EP from Rob Clores’ new eponymous project, is an interesting new addition to this year’s field of new EPs.  That is due to its combination of musical and lyrical content.  The musical and lyrical content featured in this record is equally diverse while the lyrical content is deep in its own right.  All three of the songs featured here support those statements.  When the songs noted here are addressed alongside the EP’s other two songs, the whole of the record makes for a presentation that holds its own against the rest of this year’s new EPs and deserves to be heard at least once if not more.  Split Second Meltdown is available now. 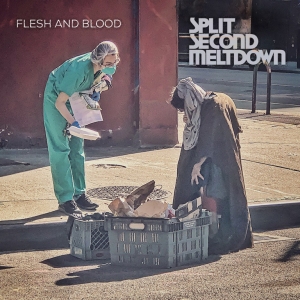 The five song record is available to stream and download here.  Its release comes less than a month after Clores debuted the lyric video for the EP’s lead single ‘Flesh and Blood.’

The EP’s track listing is noted below.  The record features guest appearances from performers, such as Charlie Paxson (Smashmouth), John ‘JD’ DeServio (Black Label Society) and Jimmy Messer (Awolnation) among others.

Clores, who is also a well-known keyboardist and composer, debuted the lyric video for his new single ‘Flesh and Blood‘ Thursday.  The song and video are the first from his forthcoming debut EP Split Second Meltdown.

The video places the song’s lyrics over shots of various city scenes, some of which are presented in time lapse fashion.  The song’s musical arrangement is a mid-tempo, blues-rock song that lends itself to comparisons to early Stone Temple Pilots works.

The song’s lyrical theme comes across as coming from the mind of anyone who is dealing with the mental and emotional stresses being brought on by everything happening in the world today.  In other words, it is a social commentary.

‘Flesh and Blood’ is one of five songs featured on Split Second Meltdown.  It is available to stream and download here.

The EP’s track listing is noted below.  The record features guest appearances from performers, such as Charlie Paxson (Smashmouth), John ‘JD’ DeServio (Black Label Society) and Jimmy Messer (Awolnation) among others.