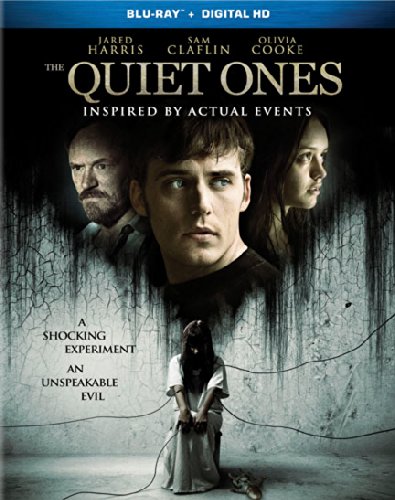 The Quiet Ones, the latest horror/thriller from Lionsgate Films, is one of the scariest movies that horror fans will see this year if not the single scariest.  The phrase edge-of-your-seat is tossed around far too often in various film genres.  However in the case of The Quiet Ones, that far too oft term is quite properly used to describe this story.  It will keep viewers on the edge of their seats from start to finish even with the movie coming in at just over an hour and a half.  It all starts with the script.  The script is one that while based on actual events, has crafted a story that successfully creates its own story.  It will leave viewers questioning quite a bit right up to the story’s twist ending.  The script is but one part of what makes The Quiet Ones work.  The acting on the part of the movie’s cast makes the story even scarier.  There is something about the cast’s acting that will pull viewers in and at times, even send chills up viewers’ spines, thus leading to the edge-of-your-seat term even more justified here.  Last but hardly least worth noting that makes this movie work now in its home release is the bonus “Making of” documentary.  Much like the far too oft used phrase noted already, “Making of” featurettes hardly ever live up to the expectation of being bonus material.  The “Making of” featurette here only serves to deepen the overall experience and in turn makes the movie even scarier.  These three factors are but the tip of the iceberg that can be noted in what makes The Quiet Ones one of 2014’s scariest movies.  Audiences will find plenty more for themselves when they purchase this movie for themselves.  And when they do, said audiences will themselves be making quite the noise (yes, bad pun intended) about The Quiet Ones.

So much can be said of the script behind The Quiet Ones.  This script isn’t just another one of those run-of-the-mill, over-the-top slasher flicks or even just another ghost story.  The movie’s script writers have crafted in this piece a story that combines an absolutely terrifying tale of the occult with an unexpected human drama, both of which combine to make a story that will leave even the hardest of unbelievers questioning what they believe right up to the story’s twist ending.  And the script itself is only part of what makes the story work as surprisingly well as it does.  The movie’s trailers made it come across as just another found footage film.  The reality of this movie is that it in fact is not just another one of those works.  Audiences will note that while there is an element of the found footage genre, it isn’t just another found footage flick.  That element is used more as part of the story rather than as the story itself, if that makes any sense.  It is used to help advance the story at various points rather than being used as the crux of the script, to hopefully make that clearer.  This is all discussed at length in the bonus “Making of” featurette that has been included in the movie’s new home release.  The discussions on those and so many other topics add even more depth to the movie.  The end result is a respect for the movie that some viewers might not have previously had should they have seen the movie while it was in theaters early this year.

The deep and deeply terrifying script crafted for The Quiet Ones is the center of the movie’s terrifying success.  It’s just one element of what makes the movie work.  Also worth taking into account is the acting on the part of the movie’s cast.  The Quiet Ones is a low budget film.  Going back to the in-depth bonus “Making of” featurette, this is noted in that featurette.  The thing is that typically, when one thinks of low budget films (such as the ones churned out by Syfy), one thinks of everything wrong with the movie industry.  But in the case of The Quiet Ones both the script itself and the acting on the part of the cast made this movie a success.  Actress Olivia Cooke (The Signal, Bates Motel, Ouija) steals the spotlight as the troubled young Jane Harper.  Viewers can’t help but watch her as the movie progresses.  At no one point does she ever try to take things over the top.  There is just something on which a finger can’t be placed about her acting that makes it work.  Perhaps as (again) noted in the bonus “Making of” featurette, it is her ability to go from zero to sixty in the blink of an eye.  Her cast mates—Jared Harris (Natural Born Killers, Lincoln, Sherlock Holmes: A Game of Shadows), Sam Claflin (Pirates of the Caribbean: On Stranger Tides, Snow White and the Huntsman, The Hunger Games: Catching Fire), and Erin Richards (Open Grave, Breaking In, Gotham) feed off of that energy and serve to heighten the story’s tension and terror.  Audiences will see that in their gradual transition from believers in science to believers in something much darker and less capable of being explained away.  They expertly interpret the script and present a fear that audiences can almost feel as they watch the story unfold.  It proves to be a feeling of terror that audiences will find it hard to shake even after the movie ends.   That is one more sign of acting done right.  So, kudos are in order for the cast of The Quiet Ones for doing their part to make this movie a terror in the best possible way.

The acting and writing that went into bringing The Quiet Ones to life are both key to the movie’s success.  Despite the work of the scribes charged with bringing the movie to life and that of the movie’s cast, this underrated horror was largely lambasted by audiences and critics alike.  Now that it is being released to DVD and Blu-ray/VUDU, audiences will see it for its true value especially thanks to the movie’s bonus “Making of” featurette.  Far too often, moviemakers and studios try to throw in these additions to movies in hopes that they will make their movies more accepted.  The problem is that hardly often enough does that actually happen.  That’s not to say that it doesn’t always work.  The case with The Quiet Ones proves that it can and does at times make a movie more worthy of respect.  Audiences get an in-depth look at the movie’s script, the location shooting, acting, and so much more.  There are discussions on the inspiration behind the script, why the house in question was chosen and even on the choice of Olivia Cooke as the movie’s lead.  Audiences will learn why this story isn’t just another movie that is based on actual events.  They will learn about the terror factor in the house and Cooke’s ability to simply turn her emotions on and off for the cameras with ease.  There is so much to note that audiences would be best served to watch this featurette for themselves.  In doing so, both those that have and haven’t already seen The Quiet Ones will have a new respect for a movie that is one of the year’s scariest movies, hands down.