Yesterday, Phil’s Picks kicked off the countdown to the year’s end with the first of its year-ender “Best Of” lists. The first of those lists was the list of the year’s best new EPs. Today, we move away from EPs to full-length records. In today’s list, Phil’s Picks presents its list of the year’s Best New Independent Albums. Just for clarification, Independent does not necessarily refer to albums released by unsigned acts. It also includes albums released by acts signed to independent labels as compared to the major labels (Capitol, Warner Brothers, etc.) This was anything but an easy list to compile. That is because there were so many deserving acts this year including the likes of the independent rock act Rubikon, Americana act Sugarcane Jane, and even legendary musician Carlos Santana’s son Salvador Santana just to name a few. Topping the list this year is Washington, D.C.-based electronic/hip-hop act Fort Knox Five with its new album Pressurize The Cabin. As with yesterday’s list, this list also features the top ten new titles as analyzed by Phil’s Picks. That list is followed by five other albums that receive honorable mention. Having said that why don’t we jump right in? In the second day of the Phil’s Picks year-ender countdown we have the year’s best new independent albums. 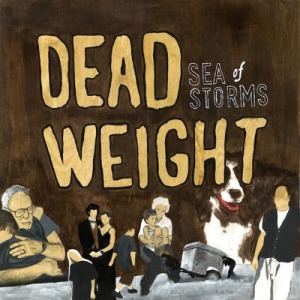 “These songs won’t ever be on the radio, but they could’ve been.” Those are the words of the publicist for the underground rock act Sea of Storms. What the band’s publicist meant in saying this was that thanks to its multitude of influences, it might have fit on most mainstream radio stations in the heyday of said acts. But because the mainstream radio landscape has changed so much over the years, the sound that the band has built from those influences doesn’t fit nicely into any of the molds that mainstream programmers have established for their respective radio stations. Rather the Richmond, VA-based band has mixed the sounds of those influences for a sound that is all its own. It is a sound that makes the band’s new album Dead Weight a record that is deserving of at least one listen. The album’s title track is one example of how that sound makes the record worth the listen. The album’s closer ‘Cedar Run’ The post-90s grunge vibe of ‘Exit Strategy’ is one more example of what makes Dead Weight worth the listen. The combination of its sound and its personal lyrics once again exemplify what SOS’ publicist meant in saying that the band’s music at one time could have been on the radio. It stands out from the likes of ‘Cedar Run’ and the album’s title track both lyrically and musically. Together with the those tracks and the remainder of the record’s nine total tracks, the record in whole shows without a doubt that Sea of Storms’ music at one time could have been on the radio. Even though they might not be on the radio today, the songs that make up the body of this record are works that any child of the 90s will fully appreciate when they give this record at least one listen.

Sea of Storms’ new album Dead Weight is a good listen for any child of the 90s looking for the multitude of sounds that came from that era specifically in the rock community. The sounds that come from the album embrace the likes of Smashing Pumpkins, The Get Up Kids, and so many others all without sounding like a carbon copy of any of those acts. The fact that the band could balance its influences with its own music on this album in itself makes the record well worth the listen. That argument is supported clearly by the album’s title track. Examining the song’s musical content, there is a hint of old school Smashing Pumpkins in the song’s verses while the choruses have more of an indie rock vibe a la Jimmy Eat World. Again, what makes this so interesting is the fact that the band was able to take both influences and meld them together into a sound that is all the band’s own. In terms of its lyrical content, the song offers just as much to talk about. Front man Brandon Peck sings in this song, “I’ve grown tired of waking up/With the sinking feeling you’ve had enough/You’re so cold/I’m alone in this house/This façade that we call home/So get lost in the sound/It’s the same old story of dead weight in this town/It’s the same as it ever was.” He goes on to sing, “So we go our own ways/We are the sum of our parts divided unequally/And each step that we take puts us further and further away/So don’t wait up/I’ll be back soon enough/I’ll be back when the morning comes/Don’t waste your time/And I won’t waste all of mine.” He closes out the song looking back at the past saying maybe looking back, it would be possible to figure out what led things to be how they are. The verses examined, it would seem that Peck is singing about a divorce or a broken relationship in general. Regardless of which topic is being discussed, the story presented in the song’s lyrical content is relatively clear. That alone makes the song’s lyrical content that much more of a boon to the composition in whole. Combined with its thankfully non-emo musical content that one would otherwise expect from the song considering its lyrics, the two elements together make ‘Dead Weight’ a clear example of why SOS’ new album is so worth the listen especially among the now grown up children of the 90s.

Dead Weight’s title track comes early in SOS’ new album. It is the third of the record’s nine tracks. Coming so early in the record it is easy to ask if the band maintains its separation from its influences throughout being that ‘Dead Weight’ is just one song. Luckily it can be said that the band does indeed maintain that separation as is evident in the album’s closer ‘Cedar Run.’ ‘Cedar Run’ boasts a clearly indie rock influence throughout its nearly five and a half-minute run time. More specifically, it runs five minutes and twenty-two seconds. But that’s irrelevant here. That indie rock vibe partnered with the song’s somewhat introspective yet optimistic lyrical content makes this song one of the record’s best moments. Peck sings here, “Let the secrets that I’ve kept/Meet the whiskey on my breath/I let my youthful pride/Make suicidal pacts/With my regret/In the time it used to take/Sometimes I can’t survive the weight/But not this time/I know I’ve made mistakes/But those mistakes made me/So make a bath in the wounds we make/We’ll make the best of our worst mistakes.” This is just one part of the whole of the song’s lyrical content, obviously. But the message is clear. It is a hopeful, optimistic outlook on life that coupled with the song’s earlier introspection, will have any listener thinking and maybe even smiling. The picture painted by the combination of the song’s music and lyrics is so rich and vivid. It plays out like something right out of a movie. Such overall depth shows clearly why ‘Cedar Run’ is another impressive addition to the whole of Dead Weight and why in turn Dead Weight proves yet again to be well worth the listen.

‘Dead Weight’ and ‘Cedar Run’ are both clear examples of what makes Dead Weight an indie album that is well worth the listen. Their lyrical content and musical content both stand apart from each other and even from other indie and mainstream acts. This is even with its variety of influences. They are only a small example of what makes the record worth the listen. The post-grunge sound of ‘Exit Strategy’ is yet another example of what makes this record as interesting as it is. John Martin’s bass line drives this song while Peck’s guitars are more of an additional element of sorts. Their parts and that of drummer Chris Brown come together to make a sound that clearly echoes that of so many well-known mainstream 90s rock acts. Yet at the same time it still manages to maintain that same separation from the noted influences as the previously noted songs. In terms of its lyrical content, the song becomes even more interesting with Peck singing, “Take the set down and redress/When the groundwork has all been set/We’ll make the call/And what you call romance is a cyclical dance made for one and played for two/And off you go/It’s unending/So stop pretending it’s alright/The lies you’ve been spreading all your life/Just like it was the best that you could give.” This comes across as coming from a rather personal point. Such personal lyrics coupled with the song’s rather mainstream, almost pop punk sound leads the song to show itself as yet another clear example of what makes Dead Weight so well worth the listen. It is another work that despite its influences still maintains its separation from those sounds, leading to a song that is patently SOS’ own. Together with ‘Cedar Run’ and ‘Dead Weight’ all three songs show clearly why Dead Weight is a surprisingly enjoyable indie release. All things considered, it could be argued that all three tracks along with those not noted show Dead Weight to be one of the best new independent albums of 2015.

In listening to each of its nine tracks, Dead Weight proves in the end to be one of this year’s best new independent albums. The songs noted here are just small samplings of what makes it such a surprisingly entertaining work from the Richmond, VA-based band. It would be unfair to not make mention of its other songs. Each of the album’s remaining six songs each offer their own enjoyment. The album taken wholly into consideration, it proves the band’s publicist completely right. Audiences likely won’t hear SOS’ songs on the radio today. But that doesn’t mean that audiences today shouldn’t hear them. Rather audiences—especially the now grown up children of the 90s—should hear this record if only once. In doing so, they will agree with the sentiment that Dead Weight is indeed one of the best new independent releases of 2015. It is available now online via the band’s Bandcamp page at http://seaofstormsrva.bandcamp.com. More information on Dead Weight is available along with the latest tour updates and news from Sea of Storms at: