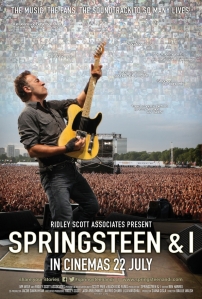 Lots of documentaries have been made over the years that include fan submissions.  But it’s rare for music documentaries to consist nearly entirely from the perspective of the fans.  It makes this a very special presentation.  What’s so interesting in terms of the fan submissions is just how many people from so many backgrounds Bruce Springsteen has reached throughout the course of his career.  Audiences see fans from every walk of life.  There are truckers, housewives, hopeful musicians, and so many others in between.  Just as interesting is the sentiment shared throughout the fan submissions.  Every fan notes just how important of a role Springsteen’s music has played in their life.  At one point, one fan tells his story of the importance of Springsteen’s music as he drives, and begins to become very emotional.  It’s one of the most moving of the main feature’s barely hour plus run time.  On the completely opposite end, there’s an appearance by “The King” in one fan story that will have audiences laughing and smiling together.  Whereas the previous moment noted was one of the film’s most moving, this moment is one of the most memorable for the wonderful feelings that it will bring about.  The story shared by the Elvis impersonator is one of this documentary’s most enjoyable of highlights.  There are plenty more highlights that could be shared.  But that would mean endless rambling.  And that is not what this critic is here to do.  However, it does bring about another aspect of the documentary that audiences will enjoy just as much as the stories shared by their fellow fans.  That enjoyable secondary aspect of the documentary is the fan and professional footage used for the feature.

The professional footage included in the feature makes up a healthy portion of its live performances.  As a matter of fact, the second hour of the feature is nothing but live footage of Springsteen and company culled from over the years.  While both the live and “bootleg” footage are combined throughout the first hour of the documentary to help illustrate the stories shared by Springsteen’s fans, the documentary’s more professionally recorded performances complete everything.  The second half of the documentary is comprised largely of live performances.  It culminates with the now infamous London 2012 performance in which the plug was pulled because the show went past the city curfew.  It makes sense as to why the London show was used as the final performance in the documentary.  The way in which it went out literally with the lights made for even more impact.  That’s because the show didn’t end there.  Springsteen stayed devoted to the audience and played one more song before having to leave the stage.  It was one last tribute to what it is that makes people love Springsteen so much to this day.  Sir Paul McCartney (The Beatles, Wings) was there along with John Fogerty (Creedence Clearwater Revival), Tom Morello (Rage Against The Machine, Audioslave, Street Sweeper Social Club).  The footage sound and video were expertly mixed both with this concert and with the others included throughout the documentary’s second half.  Even after the concert ends, there’s one more surprise for audiences that takes up the last ten minutes or so of the documentary.  It will leave audiences feeling entirely fulfilled, knowing they have just experienced something very special.

The mix of live footage and fan submitted stories makes Springsteen and I more than just another concert documentary or documentary.  All things considered, it will be a wonderful experience for any true fan of Bruce Springsteen from start to finish.  And it will be an equally welcome addition to any Springsteen fan’s home library when it is eventually released to DVD and/or Blu-ray.  But first, it will run exclusively in theaters one time today, July 22nd and again next Tuesday, July 30th.  Audiences can check to see if it will play at their nearest theater online at http://www.fathomevents.com/#!springsteen-and-i.  Fans in Greenville, North Carolina will get to see this feature tonight at the Greenville Grande 14.  Audiences in Raleigh will also get to see it as it will play at the Brier Creek Stadium 14.  Fans in the mountains of North Carolina will also get to see the presentation as it will run at theaters in Asheville, Charlotte, Concord, Greensboro, and Salisbury.  Tickets for showings can also be purchased online at http://www.fathomevents.com/#!springsteen-and-i.

Former Beatle and veteran musician Sir Paul McCartney has proven once more on his new release, Live Kisses, why he is still one of the music industry’s most respected names.  This live in-studio performance presents McCartney from Capitol Studios as he recorded the tracks for his most recent release, Kisses on the Bottom.  The recording session was recorded on February 9th of this year.  A lot went into making Live Kisses the enjoyable in-studio performance that it was and will be for any McCartney and Beatles fan this holiday season and well into the New Year.

Live Kisses takes audiences not so much behind the scenes of the recording of Kisses from the Bottom but into the recording process as it happened.  Watching the recording process at work is just as entertaining as listening to the finished product.  The whole mood of the “performance” is set through simple factors such as lighting, the use of older style microphones, and even recording pieces of the session in black and white.  That alone really helps to elevate the nostalgic vibe of the classic standards included in the record as each is being recorded.  If that isn’t enough, the very setting of the recording room at the legendary Capitol Records adds even more to the throwback feeling of the music.  Especially those who have any knowledge of the history behind Capitol Records will appreciate the session being filmed at the company’s headquarters.  There is even a note about the space in which the recording session took place in the booklet that accompanies this recording  Along with the session’s other factors, they all come together to make a performance that will create a strong sense of nostalgia in any listener’s mind.

The setting and general effect went a long way toward making this performance something very special.  They were just part of the overall enjoyment of Live Kisses though.  While enjoying the songs performed in this session, audiences are also presented with images of his own childhood as he sings, ‘Home (When Shadows Fall).  The combination of the two adds a truly emotional moment to McCartney’s performance here.  Famed jazz musician Diana Krall’s inclusion on the piano on this song makes it that much more of a joy to experience.

Speaking of Mrs. Krall, both she and her husband Elvis Costello play a role throughout the recording session presented on this Blu-ray disc.  Costello shares with viewers both an introduction to the performance and a transcript of the conversation between himself and McCartney in the accompanying “book” in which the disc comes.  There’s even a joke shared between the two veteran musicians about the inclusion of Krall in the performance.  Of course, the comments regarding her are nothing but positive.  Audiences can find out for themselves what the pair discuss, and can also experience this amazing performance when they pick up this brand new Blu-ray release in store or online.  Live Kisses can be ordered direct online via Eagle Rock Entertainments, website, http://www.eagle-rock.com/product/EVB334289/Live+Kisses and at McCartney’s own official website, http://store.paulmccartney.com/livekisses/usd.php.

Music, it’s said, is the universal language.  It’s been said that it has the power to unite people of every background from every corner of the world.  In the aftermath of September 11, 2001, that adage never proved truer than with the Concert for New York.  And in Paul McCartney’s recently released dvd, The Love We Make, audiences get a glimpse into everything that led up to the concert.  Needless to say, The Love We Make is not a concert dvd.  It’s a documentary.  And anyone who is left dry-eyed by the end of this work is either not human, or simply has no emotion.

One of the most intriguing aspects of The Love We Make is how it portrays McCartney.  Generally in music documentaries, audiences just see the artists as artists.  But with this documentary, audiences see another side of McCartney.  They see Paul McCartney the person equally balanced with Paul McCartney the artist.  It shows how much performing for the people of New York meant for him, in the wake of that tragic day.  He tells the story during the documentary that his decision to headline the concert was influenced by his father.  He explains that his father was a firefighter in WWII, and seeing what happened on September 11th reminded him of how important it was to honor those men and women who give of themselves every day.

McCartney’s story about his father has a lasting impact throughout the documentary.  Audiences get to see his human side as he signs autographs for people, and talks to them about what had happened.  What it serves to do is show that while yes, he’s a celebrity, he’s still a normal average person.  He’s someone who wanted to help, even if it means having to appear on Howard Stern.  Speaking of Stern, his reaction to Stern’s showing at the concert only added to his humanity.  Along with seeing his humanity, viewers see someone who is a true musician.  Again, yes he’s a celebraity.  But the documentary shows him as someone who is more about the music and the people than about the celebrity status.  It makes the 94-minute run time seem to pass by without effort from either the director or audience.

It’s been just over ten years since what is now considered this generation’s Pearl Harbor.  Since that time, some people have forgotten the sense of togetherness and community that was felt across the country at that concert.  People from every walk of life came together for a singular reason, and a single night to honor those men and women who lost their lives on one of this nation’s darkest days.  But thanks to The Love We Make, hopefully those who might have forgotten that feeling will remember it anew after watching this outstanding film.