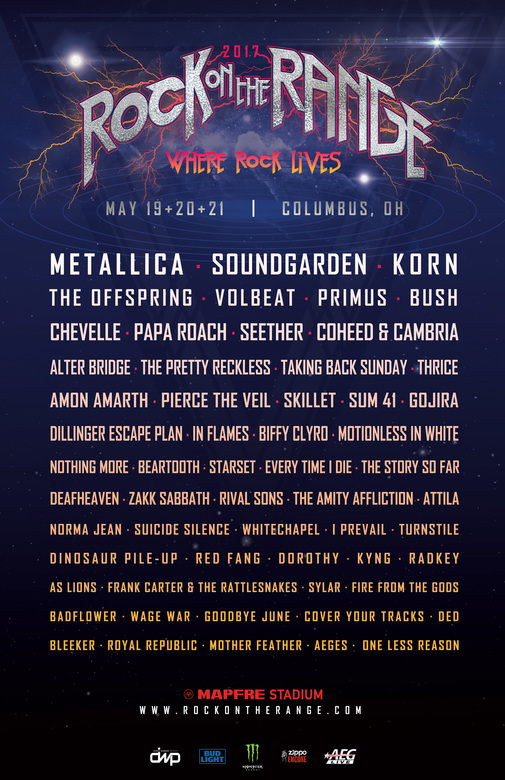 The lineup for the 2017 Rock on the Range Festival has been announced, and once again it has proven to be quite the collection of acts.

The three-day festival will be headlined by Metallica, Soundgarden and Korn.  It will feature more than 50 bands over the course of that time along with some of the country’s top comics at the festival’s Rock on the Range Rolling Rock Comedy Tent.

Rock on the Range—fueled by Monster Energy—is billed as America’s largest and most acclaimed rock festival.  The festival will also feature in 2017 “The Music Experience,” art installations, and unique on-site activities over the course of the festival’s three days.

Weekend Field, new Weekend Field VIP, Weekend Stadium and a limited number of Weekend Stadium 4-packs are available now for purchase.  A layaway option is also available for concert-goers.  That option allows audiences to split the cost of their ticket/ticket packages into four separate monthly payments.

General on-sale for tickets is Friday, Dec. 2 at 10 a.m. EST.  Tickets will be available online at the festival’s website, at Ticketmaster locations and the MAPFRE Stadium box office.

Audiences who want an even more special concert experience can purchase the new Uber Ranger Camping Package.  The package includes amenities for four people such as luxury RV on a double campsite at the Ohio Expo North Campground (May 18 – 21), a dedicated concierge with golf cart shuttle, 4 Weekend VIP Field Admission Tickets, a backstage tour, access to the stadium club (with catered lunch and dinner), access to the Side Stage Viewing Platform, access to the VIP Lounge and more.  More information on the new Uber Ranger Camping Package is available here.

Rock on The Range celebrated its 10th anniversary in 2016.  More than 120,000 people attended the festival from around the world.  As part of its 10th anniversary celebration, Columbus, OH mayor Andrew J. Ginther and the Columbus, OH city council presented festival organizers with awards of recognition.  A resolution was also announced from the Franklin County Board of Commissioners acknowledging the festival’s economic impact on the city.

The commissioners pointed out in their resolution pointed out the festival brought in more than $140 million for the city over the course of its ten years in the city.

Rock on the Range is produced by Danny Wimmer Presents, AEG Live and MAPFRE Stadium.  It is supported by Monster Energy, Bud Light and Zippo.  They and other partners will feature interactive experiences, meet & greets, and other special fan engagement opportunities throughout the festival.

More information on the 2017 Rock on the Range Festival is available online now at: 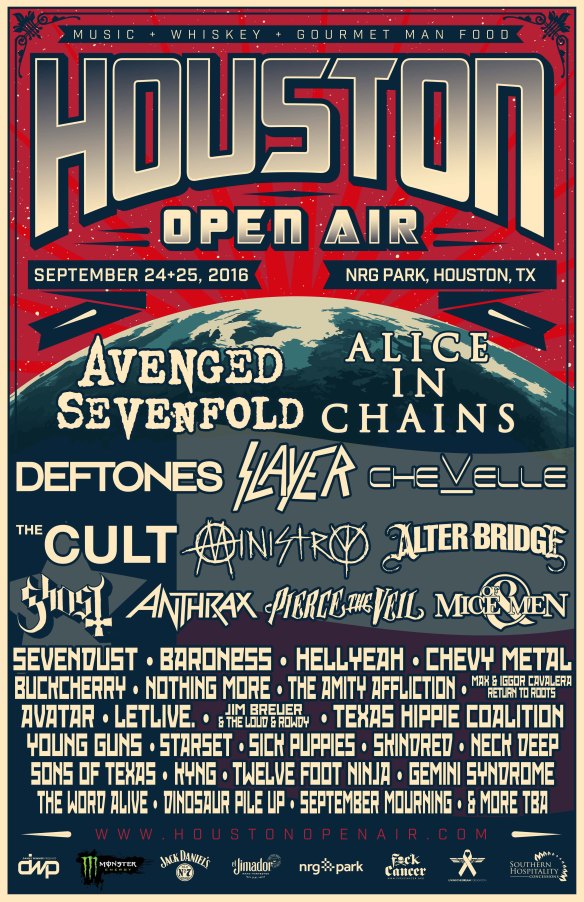 The lineup for the 2016 Houston Open Air Festival has officially been announced.

A rolling discounted Early Bird pre-sale for Weekend General Admission tickets begins this Tuesday, May 17th at 12pm CDT/1pm EDT.  A very limited quantity of tickets will be available during this pre-sale.  They can be purchased online at http://www.HoustonOpenAir.com and will only be available while supplies last.  Their prices are noted below.

VIP weekend tickets will also be available at a cost of $234.50.

Public on-sale tickets will go on sale Friday, May 20th at 12pm CDT/1pm EDT.  They will also be available for purchase online at http://www.HoustonOpenAir.com.  Their prices are listed below.

A portion of all proceeds from ticket sales for the festival will go toward aiding the Greater Houston Storm Relief Fund.  The Greater Houston Storm Relief Fund was established by Houston’s mayor Sylvester Turner in order to accept donations for flood relief in the Houston community.  This includes aiding victims of the flooding that stemmed from recent storms that hit the region.  More information on The Greater Houston Storm Relief Fund is available online at http://www.houstonrecovers.org.  Danny Hayes, CEO of Danny Wimmer Presents, spoke with the media recently.  He discussed the timing of the festival’s announcement in relation to the city’s recovery from said storms as well as the motivation for teaming with Mayor Turner in his recovery efforts.  “Houston Open Air has been in the works for almost a year now,” he said.  It’s awkward to announce a major music festival in a city that has experienced such recent hardship and, in fact, we delayed our announcements out of respect for what Houston has endured. But at the same time, our festivals are about highlighting the strengths (or sometimes the needs) of our host city. There’s no more important way to do that right now than to support Mayor Turner’s efforts to help Houston recover from this spring’s flooding and we will be incorporating this message throughout our launch campaign.”

Danny Wimmer is the founder of Danny Wimmer Presents.  He shared his thoughts on the logistics of the concert’s location, its lineup, and more in his discussion with the press.  “Houston is one of the country’s biggest rock markets and, when combined with the impressive food scene happening here, it’s a natural location for a DWP festival,” he said.  “We’re thrilled to have such a diverse first-year lineup that includes Avenged Sevenfold, Alice In Chains and Chevelle. With the inclusion of an incredible food experience and the Jack Daniel’s Whiskey Row, we are kicking off a powerhouse experience that will live in the market for many years to come!”

NRG Park is the home of the NFL’s Houston Texans and the annual Houston Livestock Show and Rodeo.  It is located at One NRG Park in Houston, TX.

More information on the Houston Open Air Festival is available online now at: 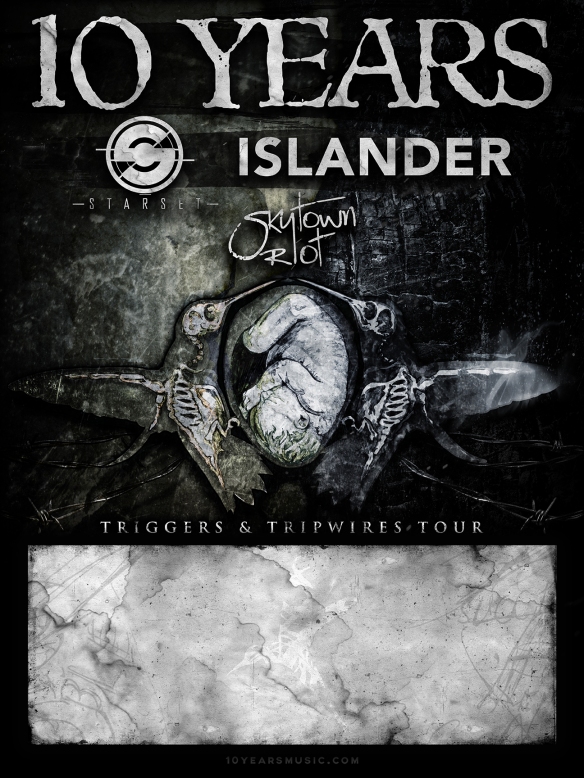 Veteran hard rock band 10 Years announced today that it will hit the road this summer.

The band announced that it will embark on the “Triggers and Tripwires” tour this spring beginning May 27th. Starset, Islander, and Skytown Riot will join the band on the 21-date tour. The tour is in support of the band’s upcoming sixth full length studio effort From Birth To Burial, which will be released next Tuesday, April 21st via the band’s own label Palehorse Records. Palehorse Records is an imprint label distributed by Megaforce Records. 10 Years’ front man Jesse Hasek recently shared his thoughts with the media on getting back on the road again saying, “We’re stoked to hit the road on the “Triggers & Tripwires” tour representing our new album. Since our new album drops April 21st it’ll be cool to tour after its release so people will be more familiar with the songs and can sing/scream along.” He went on to express his happiness at touring alongside Starset, Islander, and Skytown Riot, saying, “We’re also very happy to share the stage with Starset, Islander, and Skytown Riot which I am personally fans of all these bands. It will be a great show start to finish!” Breaking Benjamin will also join 10 Years on a pair of dates on the upcoming tour.

Before 10 Years launches the “Triggers and Tripwires Tour,” it will perform a handful of warmup dates to get ready. The band’s warmup schedule kicks off this Friday, April 17th and runs through Sunday, April 26th. That schedule includes a pair of dates in Charlotte, North Carolina and Raleigh, North Carolina next Friday and Saturday, April 24th and 25th respectively. Hellyeah will join 10 Years on the opening date of the band’s warmup schedule. Seether will join 10 Years at both of its North Carolina dates.  10 Years’ complete tour schedule is listed below: 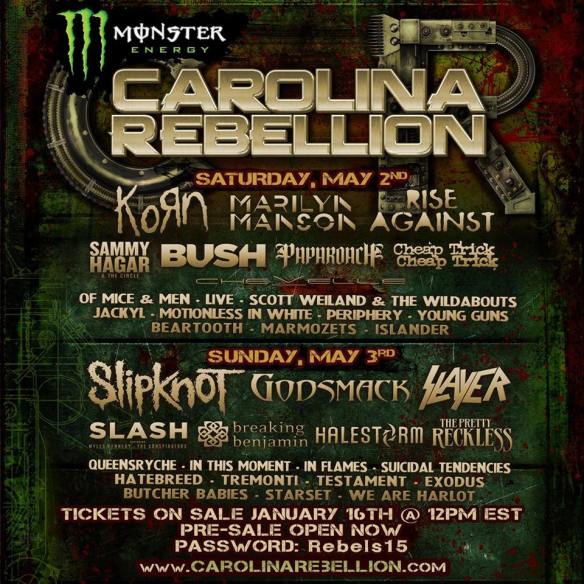 The Monster Energy Carolina Rebellion Festival is one of North Carolina’s biggest annual music festivals if not the biggest. And this year, the festival will celebrate an important anniversary when it returns to the Rock City Campgrounds at Charlotte Motor Speedway on May 2nd and 3rd.

This year, the Monster Energy Carolina Rebellion Festival celebrates its fifth anniversary with one of its biggest lineups to date. The fifth annual festival will feature no fewer than thirty-six acts over two days. The acts tapped to perform this year include some of the biggest names in rock’s past, present, and future. Those names include the likes of: Slayer, Slipknot, Queensryche, Hatebreed, Cheap Trick, Korn, Marilyn Manson, Rise Against, Jackyl, In Flames, Periphery, and many other major names. The current lineup for this year’s festival is listed below.

Slipknot front man Corey Taylor discussed the band’s addition to the bill and playing alongside other great names in rock in a recent interview saying, “We are very excited to be headlining Rebellion this year! We’re honored to be playing in the company of Cheap Trick, one of my all-time favorites, as well as playing with such good friends like Korn, Halestorm and Slayer!” Korn front man Jonathan Davis explained that the Carolina Rebellion festival plays a very important part in that band’s history as it served as the point of reunion for the band with guitarist Brian “Head” Welch in 2012. “Three years ago, we reunited with our brother Head on stage at Carolina Rebellion. Since then, we made a new album and toured the world together,” he said. He went on to note that the reunion means even more as the band plans on playing its debut album in its entirety at this year’s festival. And now we’re back to perform our first album in its entirety.  Rebellion is going to be a really special show for us,” he said.

Carolina Rebellion Festival Co-Executive Producer Gary Spivack of RockHouse discussed the importance of this year’s installment of what is the biggest of the Mid-Atlantic region’s rock festivals and of making it a special, memorable anniversary for audiences. “Rebellion is truly the Carolinas ’ biggest music party of the year,” he said. “For the 5th annual Monster Energy Carolina Rebellion, we wanted to acknowledge not only the best in current rock with the likes of Slipknot, Godsmack, Breaking Benjamin and more, but also celebrate some great iconic rock bands like Sammy Hagar & The Circle, Cheap Trick, Slayer and others to give the Rebels the widest range of Rock N’ Roll possible.”

A ticket pre-sale is currently underway for the festival. It runs until Friday, January 16th at 11:59am ET. The pre-sale offers a limited amount of tickets at early bird pre-sale prices (plus fees). Those prices are:

Those that purchase weekend general admission tickets during both the current pre-sale and the upcoming general on-sale period can purchase a VIP Lounge Upgrade for $110. Even bigger news for audiences, the Carolina Rebellion Festival is offering layaway packages for purchase through January 31st. This is the first year that this is being made available for audiences. A limited number of discount tickets for active military members via GovX.