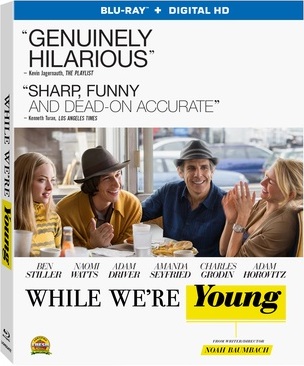 While We’re Young will be released on Blu-ray + Digital HD combo pack and DVD + Digital combo pack on Tuesday, June 30th. Stiller (Night at the Museum 1 – 3) and Naomi Watts (King Kong, The Impossible, Mullholland Drive) star as a pair of aging urban sophisticates trying too hard to hold onto their youth in the movie. In their efforts to hold onto their youth, the pair—Jason (Stiller) and Cornelia (Watts)—join a hip-hop dance class and “mind-expanding” parties among other activities. They are joined by Adam Driver (HBO’s Girls), Amanda Seyfried (Alice in Wonderland, Les Miserables, Mamma Mia), Charles Grodin (Beethoven, Beethoven’s Second, Midnight Run) and now former Beastie Boys member Adam Horovitz (a.k. Ad-Rock) along the way. The movie was helmed by Academy Award®-nominated director Noah Baumbach (Best Original Screenplay The Squid and the Whale, 2005). Baumbach has also previously worked with Stiller on the 2010 drama Greenberg. He also developed the big screen adaptation of the classic children’s book The Fantastic Mr. Fox in 2009.

One writer for Variety called While We’re Young a “blisteringly of-the-moment and classically zany comedy.” Along with the main feature, both the Blu-ray + Digital HD and DVD + Digital combo pack will also feature a handful of bonus material including six behind-the scenes featurettes and some more scene specific features. The complete list of bonus material included on the Blu-ray + Digital HD combo pack is noted below.

MLB Productions’ latest home release is a good way to start off the New Year and a new season of baseball.  MLB Superstars: Impact Players is an hour plus profile of some of Major League Baseball’s best up-and-coming players.  It’s an easy to follow feature that takes audiences around the diamond focusing on the top players from both the American and National League without the unnecessary add-ons that one might see on a television take of the program.  Though it was produced and edited much in the same vein of something one might see in the course of a pre-game show on MLB network or any network currently airing big league baseball.

Over the course of its near ninety-minute run time, audiences get profiles of young stars the likes of Prince Fielder, Joey Votto, Aroldis Champman, Stephen Strasburg, and many more.  Their pedigrees are expertly illustrated through the eyes of those closest to them and to the game, including broadcasters, fellow and former teammates, and even managers and owners.  It’s all set largely against the backdrop of the 2012 MLB All-Star Game.  The video quality is top notch as each player’s profile is highlighted by footage of both their performance at the All-Star Game and through games that each has played.  The footage was recorded and edited by Major League Baseball.  So viewers naturally get professional quality footage.  Viewers even get some more lighthearted moments as they get to hear audio of the players both before and during their games.  That coupled with the profiles of fellow players, managers, and broadcasters will entertain and enlighten baseball fans, thus keeping them engaged throughout the program’s run-time.

This new DVD’s main feature makes for a great introduction to Major League Baseball’s 2013 season.  It serves as a way to introduce viewers to baseball’s next generation of star athletes.  As an added bonus, viewers also get a brief history of the players’ walk-offs.  Also, Troy Tulowitzki, who is one of those up-and-comers, gets his own feature as does San Francisco Giants pitcher Matt Cain.  Cain’s pitching performance in the Giants’ first ever perfect game closes out the disc’s bonus features.  That game and the footage from the disc’s other bonus features was also produced and edited by Major League Baseball.  So audiences even get in these bonuses professional quality game footage and one more way to get hyped for a new season.  Together with the disc’s main feature the bonuses and the main feature mix to make another release that is everything baseball fans have come to expect from MLB Productions.  MLB Superstars: Impact Players is available now and can be ordered online at http://shop.mlb.com/product/index.jsp?productId=19148216.