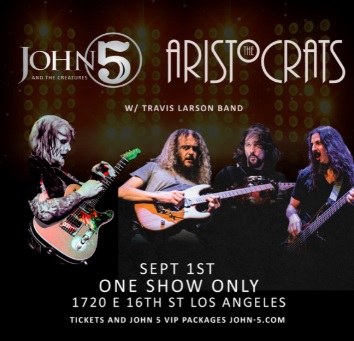 John 5 will release his new album next month, and in celebration, has announced a special new live performance.

The famed guitarist — and his backing band The Creatures — will co-headline a special performance with The Aristocrats — Guthrie Govan (guitar), Bryan Beller (bass) and Marco Minnemann (drums) — on Sept. 1 at 1720 in Los Angeles, CA.  The performance will be the first for John 5 and The Creatures following the release of the group’s new album Invasion on July 31.

John 5 (a.k.a. John William Lowery) and The Creatures debuted the video for Invasion‘s lead single ‘Zoinks!‘ in January. He talked about his anticipation for the upcoming performance in a recent interview.

“John 5 and The Aristocrats — It doesn’t get much better than that,” Lowery said.  “It’s one show only and you’re not going to want to miss it.  It’s going to be a very exciting night, and definitely one to remember.”

The Aristocrats shared Lowery’s thoughts in a separate statement.

“We always say that anything can happen onstage at an Aristocrats show — and that goes double for a John 5/Aristocrats double bill!,” the band said.  “We’re psyched because the Aristocrats and John 5 are obviously coming at the instrumental rock thing from just completely different angles, and neither one of us is playing it straight down the middle.  Should be a fun night for anyone in L.A. who likes their music loud and bent.”

The Travis Larson Band will serve as the opening act for the concert.

More information on the upcoming concert is available online now along with all of John 5 and The Creatures’ latest news at: