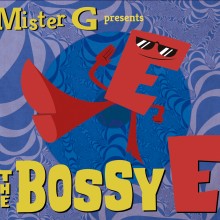 Children’s entertainer Mister G will release his latest full length album later this month. The Bossy E will be released Tuesday, June 24th. Suffice it to say that this album is one of the year’s best new children’s records hands down. The album is deserving of such a title thanks to its mix of catchy music and equally positive and important messages. The very title of The Bossy E tells listeners what they can expect from this record. The album’s opener ‘Love To Read’ and its companion piece ‘Everything’s Free at the Library’ both promote literacy. The album’s title track is a great tool for both teachers and parents to teach young listeners. For all of the fun educational content that Mister G incorporated into The Bossy E, it’s not all that was included. He also included a song in ‘Daddy’s Snoring’ that every woman across the country will appreciate. And his simply titled song ‘Camp’ touts the fun of going to summer camp for the first time. He reassures young listeners that despite that normal feeling of separation anxiety, they’ll find that they actually will enjoy camp if they allow themselves to do so. The songs noted here are not the only songs that make The Bossy E deserving of being called one of the year’s best new children’s albums. There are seven other tracks from which listeners can choose as their favorite or even favorites. Regardless of whether they choose one of those songs or one of the pieces noted here, everyone will agree that The Bossy E is more than deserving of a spot on any critic’s list of the year’s best new children’s albums.

In listening to The Bossy E, listeners will note the first half of Mister G’s new album is made up of songs that promote literacy in various avenues. The album’s opener, ‘Love to Read’ is a short but catchy tune that openly promotes the joy that one gets from reading. Mister G sings in this song, “Most of all/I love to read/Give me a bunch of books/And I’ll go to my room/And travel round the world/In an afternoon/There’s not that much/That I really need/Cause most of all/I love to read.” He goes on to sing about all the different kinds of books he loves to read. He says he “just can’t get enough” because he “loves to read.” This message of the joys of reading is extremely important especially in an age when children have immediate gratification thanks to the internet, video games, and other technology. Children today need to know the joys of cracking open a good book, not turning on a nook or some other e-reader. The song’s closing line in which Mister G recites the alphabet in full is a good setup for the album’s title track.

‘The Bossy E’ is a fun surf-rock style song that teaches the vowels. The imagery used on the album’s cover is a great addition to the song. It presents a rather large letter “E” walking tall over everything else. That image set against the fun musical backing and silly yet educational lyrics will have any listener young or young at heart smiling and singing happily along. He sings in this song, “When you see ‘em there sitting/At the end of a word/I’m the Bossy E/Or Haven’t you heard/If you’re an A/If you’re an E/An I an O a U/Well I’m the bossy E/And I’m the boss of you.” Again, it’s silly. But it is a fun and catchy way to teach the vowels to young listeners. It will teach said listeners all while having them singing and dancing along to Mister G’s catchy song. The young listeners in question might not even realize they’re learning all while being entertained. It’s yet another example of what makes The Bossy E one of this year’s best new children’s albums. It isn’t the last example, either.

As if ‘The Bossy E’ and ‘Love to Read’ aren’t enough for listeners, Mister G encourages his young listeners to not only read but to also frequent their local libraries so that they can discover the joy of books. What’s more, he explains both to his younger and older readers that “Everything’s free at the library.” He sings against the song’s bluesy musical side, “Summer’s here and we’re finally free/Everything’s free at the library/There must be a million books in here/But I’m a super reader/So have no fear/I’ll read ten thousand every day/Until my head explodes in a really cool way.” He goes on to sing about spending the summer with one’s imagination thanks to books. It could be easily argued that this song is the “companion” piece to The Bossy E’s opener. That’s because not only does it promote literacy, but it promotes actually going to the library since books can be checked out for free. Many libraries are suffering financially because people are relying increasingly on digital technology for their books. It’s a sad statement. Thankfully there is this song to help promote the importance and need of libraries.

The songs that make up the first half of The Bossy E are just as entertaining as they are educational. And that’s saying something. For all of the educational content included in this album, Mister G also offers listeners some pieces that are simply entertaining. Women across the country will appreciate the fully tongue-in-cheek song that is ‘Daddy’s Snoring.’ It’s exactly what it sounds like. And the simply titled ‘Camp’ is a great way to help kids get over their anxiety over going to camp for the first time. All of the songs noted here more than make the argument as to why Mister G’s latest album deserves a spot on this year’s list of the best new children’s albums. That isn’t to discredit the album’s other songs by any means. If anything, they are just as much fodder for that argument. And audiences will agree when they hear the songs for themselves when The Bossy E is made available in stores and online June 24th.