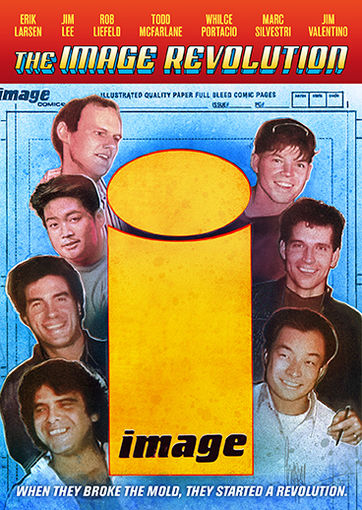 With great power comes great responsibility. Regardless of whether or not a person is a Spiderman fan or even a fan of comic books in general, most people know that timeless line spoken by Peter Parker’s uncle Ben.  It is also a piece of knowledge that would have served the founders of Image Comics well when they founded the independent comics company.  That is evident in watching Shout! Factory’s new documentary on Image Comics The Image Revolution.  While it is a documentary that centers mainly on the rise, fall, and re-emergence (of sorts) of Image Comics it is more than just a documentary about a comics company.  It is a documentary about a business.  That being the case, it is a presentation that will reach not just comic book lovers but even those with any interest and/or experience in the business world.  That is the central element of program that makes it worth the watch.  The manner in which the documentary was presented is another element worth noting.  That includes the interviews with those that founded Image Comics and the comic book panel style transitions and the vintage footage incorporated into the documentary.  Last but hardly least of note in this presentation is its bonus interview segments.  The bonus material in question presents the interview material not included in the program’s main presentation.  So basically they round out the documentary in whole.  It’s one more part of the Image Revolution’s whole that makes it such an interesting watch whether one is a comic book fan, an artist, or a business person.  Altogether, all three elements make The Image Revolution an early candidate for a spot on 2016’s list of Best New Documentaries.

The Image Revolution is an early candidate for a spot on 2016’s list of the year’s Best New Documentaries.  The documentary’s subject matter is the main element that makes it such a worthwhile watch.  The documentary’s subject matter centers on the history of independent comic book publisher Image Comics.  It follows the company’s meteoric rise to fame (and that of the men that started the company), its fall, and eventual return to greatness.  The story is one that will appeal not just to lovers of comic books and graphic novels but to artists of all types and even those with any interest and/or experience in the business world.  It is not just a niche presentation despite its subject matter.  It shows how a group of men working for America’s two biggest comic book companies left those companies in order to form a company that was to be the antithesis of those companies yet in its own way became everything that it stood against.  In turn it ended up struggling to a point before enjoying a revival that has continued to this very day.  Those that are lovers of comic books and graphic novels will appreciate the story of how far Image Comics has come as well as the collective story of the men that started Image and the titles that each used to launch the company.  Those that are experienced in art in its various forms will appreciate the discussions on how each man started out drawing his respective title but then found himself growing away and relegating that duty in large part to someone else.  Those that have any experience and/or interest in the business world will find interesting the very story of the financial irresponsibility of the company’s founders.  That irresponsibility would of course serve as a lesson for each as the men grew both by themselves and together.  Whether one focuses on the business aspect of the story, that of the men and titles that launched Image Comics, or the different art styles of each artist, there is something for a number of audiences.  This is just one way in which The Image Revolution proves itself to be such a worthwhile watch and standout documentary.  It isn’t the only element that makes it stand out so well either.  The manner in which the documentary was presented is another important element in the whole of its presentation.

The story that lies at the center of The Image Revolution is in itself an important part of this documentary.  It is a multi-faceted story that will reach more than just the obvious audience base.  This is just one element that stands out in The Image Revolution’s overall presentation.  The manner in which the documentary is presented is just as important to its presentation as the story at the center of the program.  The program is presented through a mix of interviews with Todd McFarlane, Rob Liefeld, and the rest of Image Comics’ founders, classic footage from the company’s vaults, and transitions presented in the fashion of comic book page panels.  The interviews allow McFarlane and company to tell the company’s story in their own words.  While each man chooses his words wisely, none minces words at the same time.  Audiences will laugh as Rob Liefeld does his best impersonations of McFarlane from time to time.  On another note, Jim Lee’s discussion on being asked to take part in Rob Liefeld’s removal from Image is just as interesting.  Audiences can hear it in Lee’s voice and see it in his face how much it pained him to have to be part of that change.  Savage Dragon creator Erik Larson and The Walking Dead creator Robert Kirkman have their own interesting anecdotes over the course of the documentary.  Audiences will laugh as Kirkman reveals how he got Image to take a chance on The Walking Dead.  That won’t be revealed here.  That is because of its link (so to speak) to The Walking Dead series.  Audiences will actually laugh at Kirkland’s ultimate revelation.  At the same time, said revelation will keep audiences watching the TV series just as rabidly as a result.  Erik Larson’s humility in discussing how he handled the fame and fortune early on and even later on is refreshing.  It shows that he didn’t and hasn’t let any of what he does go to his head.

The interviews that are featured throughout the course of The Image Revolution’s eighty-three-minute run time are their own important part of the approach to the documentary’s presentation.  The classic footage that is incorporated into the documentary adds even more interest to its overall presentation, too.  It is clear that the footage was recorded via VHS camcorder.  That is because it is obvious no attempt was made to clean up the footage.  The footage in question features McFarlane and company at comic book signings that were jam packed with fans at every stop.  There is also footage of how things went in the Image offices on an everyday basis along with much more.  Audiences will love watching all of the vintage footage.  It will transport viewers back to Image’s golden age and really serve to show how high things were for all involved at the time.  At the same time, it helps to heighten the story as it advances.  Speaking of that advancement, the transitions are just as important to the program’s presentation as its interviews and vintage footage.

The transitions that are used throughout the course of The Image Revolution might not seem like all that important of an element to its presentation.  But believe it or not they are in fact quite important to its presentation.  The transitions are presented as panels from the pages of a comic book right down to their animation.  They serve a special purpose in the story.  That is because they really increase the story’s emotion in both directions, thus keeping audiences fully engaged.  Together with the interviews and vintage footage all three elements combine to make the presentation of The Image Revolution rock solid.  Of course they are still not all that makes this documentary worth the watch.  The extended interviews that are included as bonus material round out the documentary.

The approach that was taken in presenting The Image Revolution is in itself a powerful element in the whole of this new documentary from Shout! Factory.  So much thought and work obviously went into its thorough presentation.  That set alongside the documentary’s central story gives audiences plenty of reason to watch this program.  As much reason as they give viewers to watch this documentary, they are not its only notable elements.  The extended interviews that are included as bonus material round out the presentation’s positives.  The interviews in question are, as labeled, extended.  They feature more in-depth discussion than what is presented in the main body of the documentary.  Liefeld, Lee, and Kirkland are all featured in the interviews.  They discuss a variety of topics, too.  From the success of AMC’s The Walking Dead to working on specific books and more, there is plenty for audiences to appreciate here.  There is even a secondary set of interviews with those close to Image comics that adds even more interest for audiences.  Those collected interviews combine with the work put into the documentary’s presentation and the documentary’s primary story to make a nearly ninety-minute presentation that comic book fans will love just as much as artists and even those in the business world.

Whether it be for the story of Image Comics itself or for the manner in which the story was presented, or even for the bonus extended interviews, The Image Revolution presents plenty for audiences of all types to appreciate. In having so much to appreciate, that wide range of audiences will agree in watching this program, that it is easily an early candidate for any critic’s list of 2016’s top new documentaries. It is available now in stores and online. It can be ordered online direct via Shout! Factory’s online store at https://www.shoutfactory.com/film/documentary/the-image-revolution. More information on this and other titles from Shout! Factory is available online now at: