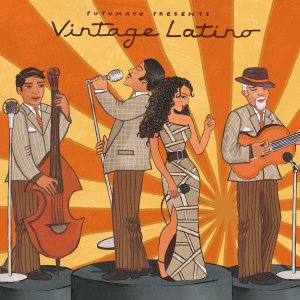 Putumayo is one of the most well-known and respected labels in the world music community.  It has been introducing listeners to great sounds from around the world for more than two decades.  And late this summer the label, which is in this critic’s eyes (and ears) one of the leading labels in the world music community, proved yet again why it is such a highly revered company when it released its latest collection of songs Vintage Latino.  Vintage Latino is one of the best of this year’s new crop of offerings within the realm of world music.  The twelve-track record is a virtual musical love letter to a bygone era; a simpler era.  It instantly transports listeners back to that time and leaves them yearning for that era.  It’s just one part of what makes this collection so enjoyable.  It will be discussed shortly.  The history lesson of sorts that is provided in the pages of the compilation’s companion booklet adds to its overall effect.  Listeners learn about the acts featured across the disc and the various musical styles that each played along with even more interesting historical tidbits.  In direct connection to the history provided to listeners through the collection’s companion booklet, Putumayo adds to the vintage effect by adding in a recipe for an actual Borrego Mojito in the back of the booklet for older listeners.  For those that aren’t familiar with the history of the mojito in general, it is a drink that originated in Cuba.  It has grown and is presented in a number of variations today including the Berrigo Mojito, which in many cases includes a slice of grapefruit.  In the case of this recipe, the grapefruit is replaced with a slice of lime.  All three noted elements are equally important in their own right to the overall success and enjoyment of Vintage Latino.  Altogether, they make this collection one that any true Latin music aficionado should have in his or her own music library.

Putumayo’s latest Latin music collection Vintage Latino is a compilation that every true Latin music aficionado should have in his or her own music library.  The main reason that it is such a must have and hear is its presented songs.  Twelve classic Latin tunes are presented across the course of the record’s forty-minute run time.  The central aspect of the songs that makes them so enjoyable is the very fact that they will instantly transport listeners back to a bygone era of music; a simpler time.  If listeners just close their eyes and let themselves take in the music, they can see those old night clubs that dotted the Cuban streets way back in the 1930s, 40s, and 50s with their elaborately painted and decorated halls and dance floors, the candlelit tables, and waiters in their finest outfits, and bands up on stage entertaining everyone.  There are also images of small groups of musicians playing on the streets.  Considering the number of Latin music albums and compilations available to listeners today, few of said collections are able to create such a welcome sense of nostalgia.  On another level, the songs introduce listeners to a handful of different musical styles that exist within the realm of Latin music.  Those musical styles include the bolero, danson-cha, son, and others.  They make for a good starting point for any music theory and more specifically college level Latin music class. This is just one of a number of reasons that Vintage Latino is well worth the listen by any fan of Latin music. The history lesson of sorts included through the collection’s companion booklet adds even more reason for Latin music fans to check out this new release.

The companion booklet included in Putumayo’s new Latin music collection is just as important to its overall presentation as the music itself. That is because it isn’t just a bunch of liner notes assembled to fill out the booklet. Rather listeners get a history lesson of sorts. Each of the compilation’s songs is accompanied in the collection’s booklet by a brief yet concise history on said songs and those that recorded and performed them. And there is a lot of interesting material contained within the pages of the booklet. For instance, there is mention of the influence of Tito Puente’s big band on Republique Democratique Du Mambo in crafting its sound, including that featured in the song ‘Cha Cha Cha Para Ti.’ Just as interesting is the history of Trio Zamora’s ‘Chinita.’ Listeners will learn in regards to this song that if not for the efforts of a pair of Jewish immigrants, it might have been lost to history along with so many other of the trio’s compositions. There is an equally rich history behind ‘Besame Mucho,’ which is one of the most well-known Latin compositions in the modern history of music. It is just one more example of why the history presented within the pages of Vintage Latino’s is just as important to the record’s overall presentation as the songs that make up the body of the record. Together, both elements give listeners a full, rich experience that every listener will enjoy and appreciate. They still are not all that makes the overall presentation that is Vintage Latino so enjoyable. Putumayo has added an interesting bonus to the overall presentation in the form of a Borrego Mojito recipe for older listeners in the back of the booklet. It rounds out the reasons that listeners will like this latest LP from Putumayo.

The music and history that make up the body of Vintage Latino are both equally important reasons for Latin music fans to add this latest collection from Putumayo. While both are of equal importance, they are not all that make the overall presentation so impressive. The bonus Borrego Mojito recipe included in the back of the collection’s booklet rounds out the presentation. While it doesn’t include a history of the mojito or its many variants–the mojito was in fact born in Cuba sometime in the 1500s—the very fact that one of the classic cocktail’s variants has been included here is in itself an interesting addition to the compilation. After making the drink, which often features a slice of grapefruit (the grapefruit has been replaced by a slice of lime here) audiences can turn on this record and feel even more like they have been transported to those old Cuban clubs that originally made the songs featured here so beloved. Together with the songs in question and their companion histories presented within the pages of the record’s booklet, the presentation in whole proves to be a wonderful new collection from one of the leading names in world music and a collection that every Latin music aficionado will want to have in his or her own home music library.

Vintage Latino offers lovers of Latin music so much to enjoy. It offers twelve classic songs that collectively make this record come across as a love letter to the era in which they were originally recorded and to the songs themselves. The companion histories that accompany the songs add even more interest and enjoyment to the record. The Borrego Mojito recipe featured in the back of the record’s booklet rounds out the whole experience. Sitting down to enjoy this variant on the classic cocktail, which itself was born in Cuba, while listening to the record’s featured songs makes for a listening experience that will make listeners feel completely as if they have been transported back to that great time and place. The experience in whole will leave listeners agreeing that Vintage Latino is a must have for any true lover of Latin music. It is available now in stores and online and can be ordered direct via Putumayo’s online store at http://www.putumayo.com/shop/vintage-latino/. More information on this and other titles from Putumayo is available online now at: