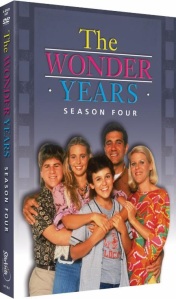 This winter, Time Life Entertainment will release the next installment of ABC’s classic family drama The Wonder Years.

Officials with Time Life Entertainment announed this week that the company will release the fourth season of The Wonder Years on Tuesday, January 12th, 2016. It will be released exclusively on DVD and will retail for MSRP of $39.95. The four-disc collection boasts all twenty-three episodes from the series’ fourth season as well as a number of extras for fans of the classic series including interviews with the series’ cast and the special featurette “ABC: Teachers That Made a Difference.” Season Four is a season of big change for Arnold and his friends. It sees Kevin making the jump from middle school to high school. That means going from being a big fish in a little pond to being the ittle fish once again in a big pond. Making things even more difficult for Kevin is that he is back together with Winnie Cooper. But she’s now at another school. Paul has his own big announcement that threatens to break up the friendship between him and Kevin. On the home front things are changing quite a bit, too. Kevin’s dad gets a promotion while Kevin gets his first job. Norma takes a job at Kevin’s school. And Karen starts college while Wayne buys his first car. Things definitely get interesting in this story as well as in all of the other big changes that come in Season Four.

If the engaging stories and bonus features aren’t enough for audiences in the fourth season of The Wonder Years, the music that accompanies its twenty-three total episodes will certainly entertain audiences. Season Four features songs from the likes of: Joan Baez, The Beatles, The Monkees, Hank Williams, Nat King Cole, Tommy James and the Shondells, The Ventures, and many more.

The Wonder Years: Season Four will be released Tuesday, January 12th. It will retail for MSRP of $39.95. More information on this and other titles from Time Life Entertainment is available online now at: