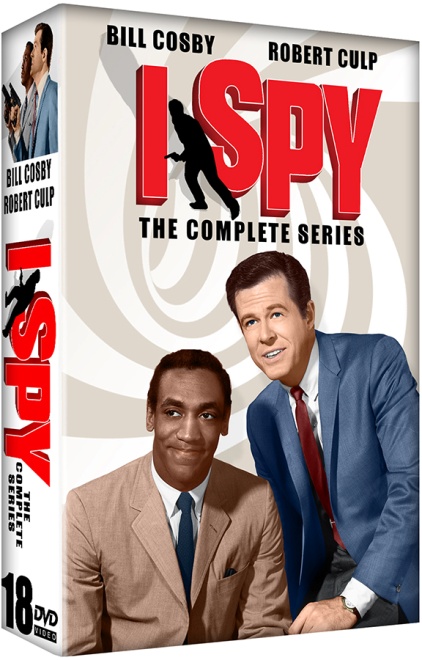 Timeless Media Group will bring audiences yet another long lost piece of television history this Summer.

Timeless Media Group will release the classic series I Spy on Tuesday, June 24th. The classic dramedy series, starring Bill Cosby (The Cosby Show, Fat Albert and the Cosby Kids) and character actor Robert Culp. It could be argued that the show’s witty writing and equally strong acting on the part of Cosby and Culp were the influence behind hit dramedies such as Monk and Psych. The series ran on NBC from 1965 to 1968 and produced a total of eighty-two episodes in that span. It won countless awards over the course of its three-year run including: the Golden Globe® for Best Dramatic Series in 1967, three consecutive Prime Time Emmys® for Outstanding Lead Actor for Bill Cosby, and the Prime Time Emmy ® for Outstanding Musical Composition for Earle Hagen. Cosby’s co-star received his own accolades for his work on the show. He was nominated for a number of Prime Time Emmy® Awards including: three Outstanding Lead Actor nominations and one for Outstanding Writing Achievement in Drama.

Along with its groundbreaking acting and writing, I Spy also featured a number of guest stars that would go on to be some of Hollywood’s biggest names. Those names include the likes of: Gene Hackman (Hoosiers, Enemy of the State, Unforgiven), Jim Backus (Mr. Magoo, Gilligan’s Island), Ron Howard (The Andy Griffith Show, Happy Days), Boris Karloff (Frankenstein, How The Grinch Stole Christmas, The Raven), Martin Landau (Ed Wood, North by Northwest, Mission: Impossible), George Takei (Star Trek), Don Rickles (Toy Story 1 – 3), and Eartha Kitt (Batman).

Disney/Pixar’s fourth cg-based family film, Monsters, Inc. is one of the biggest hits from the two companies.  The pair has taken one of the most common of childhood fears and turned it into a big, soft fuzzy memory that kids and adults alike will love to encounter again and again.  Monsters, Inc. isn’t the first time that Hollywood has tackled the issue of things that go bump in the night.  Though, in comparison to the 1989 movie, Little Monsters, Monsters, Inc. it is far more memorable.  And now that Disney and Pixar have re-issued this modern classic on Blu-ray/DVD and 3D BD/DVD combo packs, audiences can enjoy it all over again.  Those who still have yet to add this flick to their family library are rewarded for having waited, too.  For the most part, this latest re-issue carries everything that was on the movie’s original double-disc DVD release right down to the audio commentary.  There are some new additions though.  And of course, the clarity of the picture is that much better this time around, too.  So is it worth picking up if one already owns the DVD set?  That’s up to the general consumer.  But for those who have yet to own it, this is a wonderful reason to finally do just that.

The latest re-issue of Monsters, Inc. is largely carried over from the original 2002 double-disc DVD release.  However, included in this new re-issue is a second disc that includes some extra entertainment for kids.  One of the best of the new inclusions is “Roz’s 100 Door Challenge.”  This bonus Blu-ray trivia game requires young audiences to answer trivia questions in order to open all of the doors put before them in order to become a Monsters, Inc. employee.  The questions come in sets of ten at a time.  So at one hundred doors, this game will keep young audiences engaged and occupied for quite some time.  This is great for parents who are looking for a way to distract their kids and get some time for themselves.

“Roz’s 100 Door Challenge” is not the only extra bonus included with this latest re-issue of Monsters, Inc.  But it is a nice addition.  Just as entertaining as the noted bonus game is the included Toy Story short, “Party-saurus Rex.”  The entire original cast from the Toy Story franchise has come back for this short in which Rex (voiced by Wallace Shawn – The Incredibles, The Princess Bride) is accused of being a party pooper.  But then he ends up surprising them after the toys’ new young owner takes him to the bath with her.  He ends up becoming the life of the party.  This is a wonderfully entertaining short from this fully solidified franchise.  As entertaining as it is, it’s even more of a bonus in that it shows should Disney and Pixar ever decide to re-visit the gang in a larger sense, it is one franchise whose sequels or even reboot would be welcomed by audiences.

The new bonus features do a lot in making the new Monsters, Inc. BD/DVD combo pack a good addition to any family’s home library.  The story itself plays just as much of a role in its success, too.  The story includes no less than two very important lessons for all of its viewers.  The first of those lessons centers on stereotypes.  It tackles this subject matter right from the story’s opening moments, presenting the monster world not as a dark and evil place, but just as happy and sunny as the human world.  And even the monsters themselves are crafted in an equally family friendly fashion.  Just as “Boo” calls him, Sully (John Goodman) is a big, mean looking monster.  But underneath all that fur, he’s just a big fuzzy “kitty”…or whatever animal one might want to use in comparison.  Both the kids and monsters believed stereotypes of the other that had been handed down and passed on.  But in giving Boo a chance, Sully and Mike prove that the stereotyped belief of children being evil, life threatening to be just that.  And Boo in her own way proves to her own self that not all monsters are bad as she grows closer to Sully in a sort of surrogate parent-child relationship.  It’s something of a tangent, but in presenting this relationship, Disney and Pixar have once more crafted a story that continues Disney’s long running tradition of emphasizing family in its movies.  Getting back to the original statement, what this movie’s writers have done is they have sent a message that it doesn’t matter who one is.  Unless one has proof of stereotypes, then one shouldn’t simply automatically believe said stereotypes.  Rather, one should take the time to find out for one’s own self how much truth they have, and not let them prevent friendships in the mean time.  It’s one more positive to what is already a fun, family friendly movie.

In relation to the emphasis on family, Monsters, Inc. also presents the message of the importance of a child’s laughter.  Sure it’s an exaggeration.  But that a single child’s laughter could power a whole city really is a wonderful metaphorical illustration.  It illustrates how one child’s smile and laughter can brighten the lives of so many.  Yes it is a bit schmaltzy.  But the world needs something positive for young audiences.  And that’s exactly what this message and movie is.  For that and the rest of the positivity in this new re-issue, it is a movie worth adding to any family’s home library.  It is available now in stores and can be ordered online at http://disneydvd.disney.go.com/monsters-inc.html.